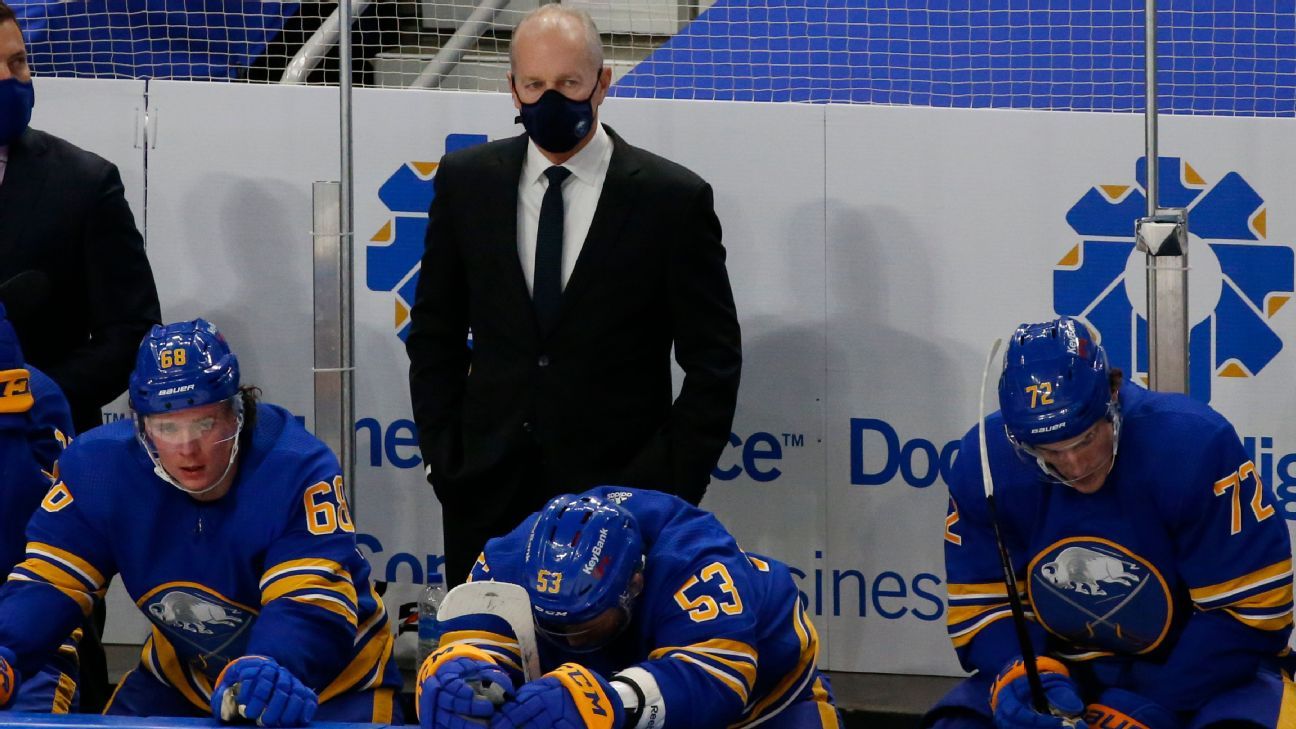 The Buffalo Sabres finally fired head coach Ralph Krueger on Wednesday, having gone 6-18-4 in this cursed season for them. That included a 3-2 loss to the New Jersey Devils on Tuesday night, who snapped an 11-game home losing streak (0-10-1) while pushing Buffalo’s losing streak to 12 games (0-10-2).

Krueger finally exited the bench with the Sabres down to a league-worst .286 points percentage. It was a change that was overdue, coming at a time where there’s little hope to salvage another lost season. That it still happened should speak volumes about how bad things had gotten.

Krueger joins Claude Julien (Montreal) and Geoff Ward (Calgary) as coaches fired during this truncated NHL season. In total, 11 coaches have been fired from 2019-21.

As the Sabres continue their plummet to the bottom, what’s the thinking for firing Krueger? And could more big changes be coming soon to Buffalo?

While the Sabres hadn’t made the playoffs since 2010-11 — the first season of owners Terry and Kim Pegula’s reign — they entered the 2020-21 season with some promise and potential.

They went 30-31-8 in Krueger’s first season in Buffalo, their highest points percentage for Buffalo (.493) since 2015-16. They had a star to build around in 24-year-old Jack Eichel, whose 1.15 points-per-game average was the best of his career. When Eichel voiced frustration over yet another year outside the playoffs, new GM Kevyn Adams gave him some support: Winning the free-agent derby for star left wing Taylor Hall, who signed a one-year deal; and trading for veteran scoring center Eric Staal.

The promise soon turned putrid. Despite the upgrades, the Sabres are the worst offensive team in the NHL, at 2.07 goals per game. They’re the third worst defensive team, at 3.39 goals allowed per game. Eichel had two goals and 16 assists in 21 games before bowing out with an injury. Hall had two goals in 28 games. Staal had three goals in 28 games. Winger Jeff Skinner, in the second year of a contract that carries a $9 million cap hit through 2027, had two goals in 25 games. When defenseman Colin Miller (three goals) has as many goals — or more — than your four best offensive players, something is amiss.

The great “what if?” for this season is the Sabres’ COVID shut down. They didn’t play a game from Feb. 1 through Feb. 14 after an outbreak, allegedly caused by an on-ice transmission in a game against the Devils. They had nine players on the NHL COVID list. They’ve won twice since returning.

The 12-game losing streak is part of a descent into the dumpster that started at the end of January, a run of 19 games in which the Sabres have won only twice. While many other facets of the team — from the ownership down to the players — received venomous criticism around the NHL, Krueger would frequently avoid it.

The 61-year-old coach had a lot of fans in the media and the hockey community. He was a non-traditional hire, having previously served as chairman of Southampton F.C. in the Premier League. He was only given one season in Edmonton when he was hired as Oilers coach in 2012-13, despite his players hoping he’d remain. He was a gregarious and charismatic coach, and someone for whom it was easy to root.

But around three weeks ago, the focus began to intensify on Krueger’s role in all of this. He benched Skinner for several games, despite the team’s lack of offense — and despite Skinner having six years left on his $72 million contract with full no-move protection. On March 5, Adams said that Krueger was “being evaluated” for his performance. “We’re very honest with each other,” Adams said. “He understands the situation that we’re in is unacceptable, that it’s flat-out not good enough.”

That scrutiny built during the 12-game losing streak, as many of the Sabres seemed to stop playing for their coach. Buffalo has been outscored 49-19 during the streak, including on a recent T.J. Oshie goal in which it appeared all the Sabres’ video game controllers had been simultaneously disconnected:

The local media had their knives out. Buffalo News columnist Mike Harrington wrote a piece on Monday slaughtering the team, writing: “You just never adapted your system to your players and the results are mind-boggling. They quit on you. You should be furious with them. But you know how this goes: It’s your fault. Your career as an NHL coach should have been over two weeks ago. It’s hard to fathom you [are] still behind the bench.”

On March 17, he no longer was. The timing was curious: This was a lost season. Krueger is owed money this season and next, so why not just have him babysit the franchise until he’s fired at the end of the year?

Two possible reasons: First, the team had clearly quit on him and things weren’t going to get any better. Second, and perhaps related to the first: The Sabres are welcoming fans back to the stands on March 20. It’s hard to fathom how negative the atmosphere would have been at a Buffalo home game had Krueger still patrolled the bench on Saturday.

Interim coach Granato was an assistant coach under Krueger, hired in 2019 when Krueger came aboard has head coach. He was previously an assistant with the Chicago Blackhawks from 2017-19 and had extensive experience as a head coach in the ECHL (three years) and the AHL, spending five seasons with the Worcester IceCats and two years with the Chicago Wolves. He was also head coach for three U.S. junior national teams.

His brother is former NHL player and current Wisconsin coach Tony Granato. Sister Cammi Granato is a former U.S. national hockey team captain and was hired as a pro scout by the NHL’s expansion franchise in Seattle.

The short answer on why Granato was promoted is that he’s already being paid and has previous experience. After fellow assistant coach Steve Smith was fired, Granato will be joined on the bench by two coaching novices: Development coaches Matt Ellis and Dan Girardi, former NHL players with no NHL coaching experience.

He was one of the only people they could turn to. This is a bandage on a gaping wound.

What’s next for Ralph Krueger?

When some NHL coaches get fired, their first thought is “how am I going to get my next coaching job?”

That is not the case for Ralph Krueger.

As previously mentioned, he was the chairman for a Premier League team. He was a member of the World Economic Forum, serving on their Global Agenda Council on New Models of Leadership. He remains a well-respected individual in multiple sports as an executive and a consultant — although after his one-and-done season in Edmonton coupled with this fiasco in Buffalo, his NHL head-coaching days are likely done.

If anything, the Sabres’ disastrous season derailed potential future plans for Krueger in Buffalo. It had been long speculated that he would eventually join their front office, potentially in a president of hockey operations capacity. That’s obviously not happening now.

What’s next for the Sabres?

How long do you have?

The first question is who will make the decisions regarding the next direction of the Sabres. Adams is in his first season as general manager, having previously worked in business administration for the team. His proactive offseason was praised, but the changes didn’t take, like an organ being rejected from a withering body. He’s not responsible for some of the salary cap albatrosses on the team, like Skinner. But he’s managed to make a bad thing worse.

The Sabres have been considering a president of hockey operations hire on and off for the last few years. One of the loudest whispers in hockey circles about a potential hiring: Jim Rutherford, who walked away from the Pittsburgh Penguins in January. The only general manager in the NHL expansion era to win Stanley Cups with two different franchises, he was the GM in Carolina when Adams played for the Hurricanes.

He would also want autonomy, which could be a problem when Terry and Kim Pegula own your team. He would also want a high salary. Same problem, except one that’s exacerbated by the Sabres reportedly owing money to three different executives who don’t work for them at the moment: Jason Botterill, Randy Sexton and Steve Greeley.

Money could also be an issue in the coaching search. They owe Krueger in the neighborhood of $3.7 million next season. “Someone will go, but they won’t have any leverage on salary,” said a source in the coaching community.

The trade deadline should see the Sabres as an active participant. Staal has trade protection, but has reportedly sought a deal to a contender. The team has 11 pending free agents, including Staal and Hall, the latter of whom has reportedly considered an extension in Buffalo. He has a full no-move this season. He’s also done himself no favors as far as his trade value.

But the biggest question — perhaps the only question — is what happens with Eichel. The young superstar has five years left on his deal after his season, with an annual cap hit of $10 million. He was frustrated by a lack of success last summer. They’ve lacked even more of it this season.

Adams said Eichel hasn’t asked for a trade. “Jack is one of the best players in the world. If people are going to make a phone call and ask, of course. But that’s the extent of it. For me, Jack is someone when you see the kind of dynamic difference-maker he can be, there’s not many in the league like him,” he said.

This is true. If he wants out, there’s nothing the Sabres can really do except find the most bountiful trade package — hello, Los Angeles Kings — they can for the young star. If he wants to stay, they still have to investigate whether the Sabres, in their current state, are better off building around Eichel or trading him for a collection of young talent and picks that can usher in another rebuild.

There are other questions about the team, from the money they haven’t invested in scouting to the lack of NHL experience in several corners of their hockey operations department. But this remains the primary one: Not who will coach Jack Eichel next season with the Sabres, but whether Jack Eichel will still be around when the new coach takes over.