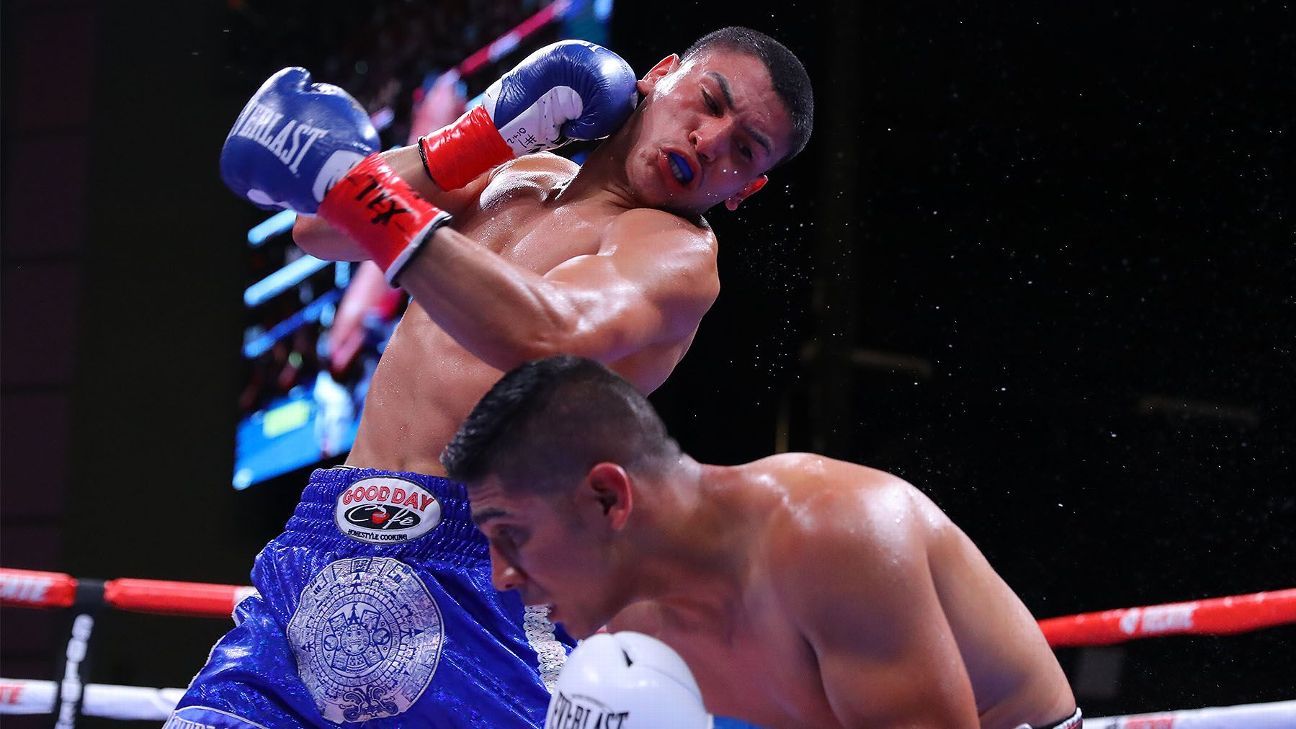 Vergil Ortiz Jr. and Maurice Hooker grew up roughly 15 minutes from each other in the Dallas-Fort Worth area. This weekend, they will continue to pursue the same dream they’ve lived for most of their lives, as they fight one another in a high-stakes boxing clash. But this night will be different, because it’s happening in front of a local crowd.

That might not seem like a big deal to an outsider. But this specific fight represents a unique moment for a region that has quietly become a boxing hotbed.

The inaugural boxing event at Fort Worth’s Dickies Arena is believed to be the first to feature two established pros hailing from the area in a major bout contested in the region. The Hooker-Ortiz bout, which will be streamed on DAZN, takes place during a golden era for north Texas boxing.

“It’s going to be a treat for the fans, especially the whole boxing community there,” Ortiz said. “They all know who me and Mo are.”

Hooker (27-1-3, 18 KOs), the former WBO junior featherweight world titlist, grew up in the Oak Cliff section of southwest Dallas. Ortiz (16-0, 16 KOs), ESPN’s 2019 Prospect of the Year, hails from Grand Prairie, which is just west of Dallas. They lived 10 miles apart, but arrived at their current statuses in vastly different manners.

Ortiz was a decorated amateur who won numerous championships, including the 2013 Junior Olympics. He trained out of the Vivero Boxing Gym in Oak Cliff, where Errol Spence Jr. also got his start. When Ortiz turned pro, he was signed by Golden Boy Promotions and went under the tutelage of Robert Garcia, one of the sport’s top trainers.

Hooker started out in the Oak Cliff Boxing Club, which opened in 1998 and produced multiple national champions. He ran across kids from Vivero at local tournaments and knew overlooking opponents had consequences.

“It didn’t matter what gym you came from,” Hooker said. “We all know that we’re all training hard, we’re all trying to prove something. Every gym was working hard.”

But no matter how hard those fighters worked, for decades big-time pro boxing in the nation’s fourth-largest metropolitan area was either minimal or dormant. Until the last few years, Boxing Hall of Famer Donald Curry, a Fort Worth native, was the area’s most recent champion after he won a super middleweight world title in 1989. Before Curry, it was Dallas’ Curtis Cokes in 1968.

Many of the area’s top athletes have opted to play football, a sport that doubles as an unofficial religion in Texas. An impressive list of football prospects has emerged from Dallas-Fort Worth, including recent top NFL draft picks Kyler Murray and Myles Garrett.

Spence grew up playing football before his father took him to a boxing gym when he was in high school. Spence is now the IBF welterweight champion, one of boxing’s top pound-for-pound fighters and one of the sport’s top attractions.

Before Spence, there were some signs of growth, although local fighters had a habit of reaching a certain point before their careers fizzled out. “The Contender” Season 1 finalist Brian Vera makes that list, as do former junior featherweight contender Roberto Marroquin and 2008 U.S. Olympian Luis Yanez.

When Spence, a 2012 Olympian, won his title in 2017, it showed Dallas-Fort Worth could also produce elite pro boxers.

“I think that what Errol did is he inspired a lot of fighters to say, ‘If he can do it, I can do it,'” said Derrick James, Spence’s trainer who also lives in Dallas. “I think that he ushered in this new era. Because we would have guys who would do great in the amateurs. They would never be great as pros, not have the right connections and not get the right fights.”

Take junior middleweight Charles Hatley, for example. Greg, Charles’ father and the founder of the Oak Cliff Boxing Club, started their own promotional company after the inability to find traction with a big matchmaker.

Hatley (29-2-1, 20 KOs) had to travel to Australia to face a faded Anthony Mudine to win a secondary WBC title, which set up a title shot against Jermell Charlo. Charlo ultimately won via seventh-round knockout.

“From my going around, traveling through the United States, we were at least 20 years behind in boxing, not talent-wise but opportunity wise,” Hatley said. “There wasn’t support”.

Going abroad has been the go-to answer for fighters from North Texas who want to create more opportunities at home. Spence had to leave the country to become a champion, traveling to England to take the belt from Kell Brook. Hooker did the same thing when he upset the previously undefeated Terry Flanagan in Manchester in 2018, giving the region two simultaneous champions for the first time ever.

Hooker’s path to a world title was forged in the struggle of that lack of opportunity. He said he had no promoter when he turned pro. He toiled away on various undercards and was the underdog against Flanagan. After Hooker won the belt in England and was set for his first title defense, his promoter lost the purse bid as Top Rank bet heavily on one of its promising prospects at the time, challenger Alex Saucedo. Hooker won in a 7th-round TKO in Saucedo’s hometown of Oklahoma City.

“I fought for everything I wanted,” Hooker told ESPN. “Nothing was handed to me.”

Eventually, Hooker got the homecoming he wanted — a title defense against Jose Ramirez in Arlington at AT&T Stadium. He relinquished the title after a memorable sixth-round TKO loss to Ramirez. Hooker faces steep odds once again on Saturday, as Ortiz will be the heavy favorite in a bout that will be contested for a secondary WBO title.

If Ortiz is successful, he wants to challenge for a legitimate 147-pound belt.

The big goal? An eventual showdown against Spence, and potentially a superfight of his own at AT&T Stadium, whenever both men move up to the 154-pound division. The biggest fight that could be made in Dallas-Fort Worth, at the home of the Dallas Cowboys, with the entire boxing world watching two hometown fighters.

“That is something I think about all the time,” Ortiz said. “I think that fight is more than makeable. It has to happen, you know? There’s really no reason not to make it other than people saying I’m not experienced. But really, I have a lot of experience.”

But first, the matter at hand. The significance of this fight for Ortiz and Hooker is obvious. Each fighter is trying to make their mark in a very crowded welterweight division led by Spence and Terence “Bud” Crawford. The winner will announce themselves as a true player in the 147-pound division.

Reggie Woods, the Dallas Golden Gloves director since 2000, said it’s an honor to know that two area fighters are headlining an area card. Regardless of the outcome, the impact of Saturday’s fight will be felt on the next generation of Dallas-Fort Worth fighters looking up to the likes of Ortiz, Hooker and Spence.

“It gives the aspiration to know, ‘Hey, I can be fighting in my hometown where I was born and raised and grew up,” Woods said, “to be headlining a main event.'”