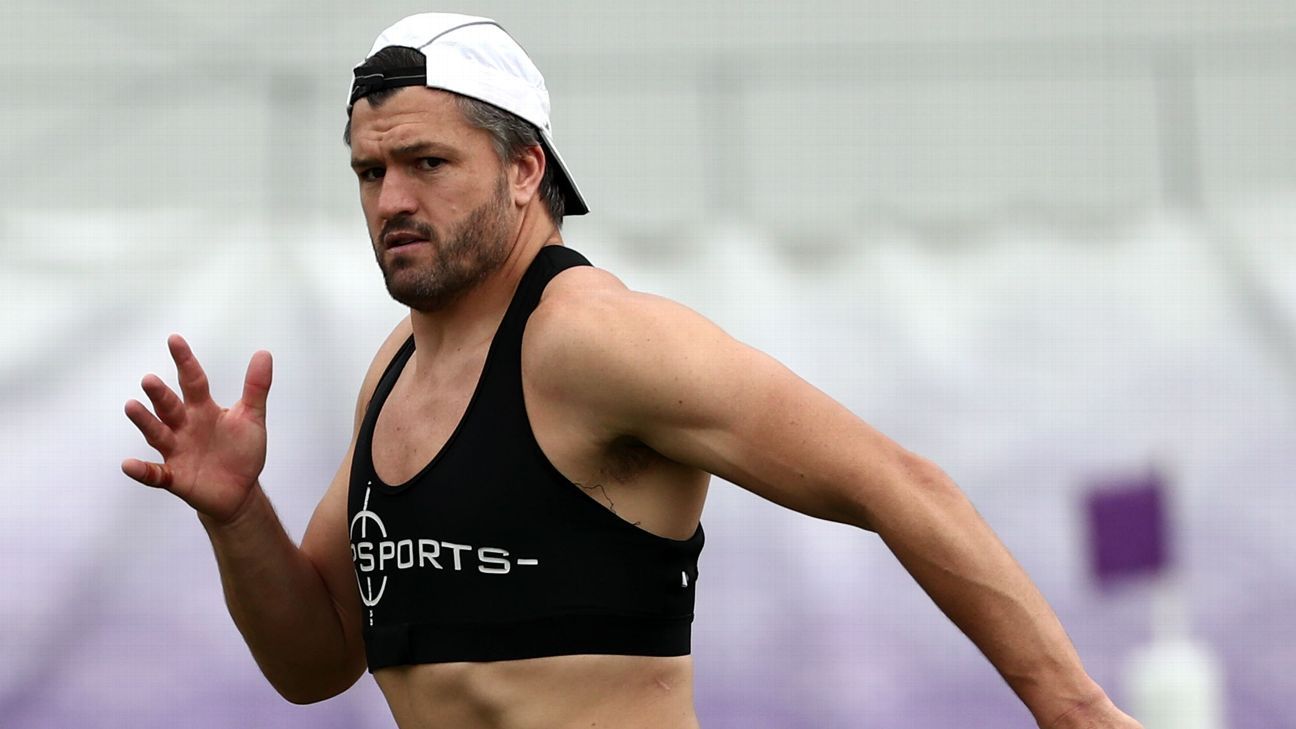 When the fourth season of Major League Rugby kicks off this weekend, a new team will cross the white line to take their competition bow – one with a distinctly Australian flavour.

The LA Giltinis begin their journey at home to the New England Free Jacks boasting an Australian general manager, head coach, assistant coach and captain among 13 squad members who’ve travelled from one side of the Pacific to the other.

They are at varying stages of both their coaching and playing careers and have different motivations as such, but given the U.S. competition has cautiously solidified its foundations it is an adventure worth taking a punt on.

For Wallabies great Adam Ashley-Cooper, 36, the chance to reconnect in a backline with Matt Giteau — one of his fellow “Three Musketeers” and co-owner of Backline Wines — and play club rugby on a fourth continent was an opportunity the veteran who first burst onto the scene with the Brumbies in 2005 could only ever dream of.

“Not at all, mate, I didn’t even think I’d last a couple of years, let alone ending up here,” Ashley-Cooper told ESPN when asked if that young Brumby ever thought his career would take him to California. “But it’s been quite a journey and I’m pretty happy to be here.

“At the start of last year, 2020, I had some conversations with [team owner] Adam Gilchrist around joining the Austin team. The visa process took a long time and then obviously COVID hit so it killed those plans and then the competition was called off.

“So I was basically just waiting round to see what the plan was and he just touched on the fact that I had LA as an option. And with a bit of an idea about the coaching staff and some of the players joining the squad, I thought it would be really exciting to head to California and continue the journey and here we are. So that’s really how it all came about.”

It’s a similar story for Hoiles, though one that thrust the former Brumbies and Waratahs back-rower onto the other side of the fence.

“The thing that does concern me is that when I did play with those guys we basically spent about 10 years taking the piss out of coaches behind their back, so I’m just wondering if they’re still doing that. And if they are that’s karma, because I was up there with them.”

Hoiles isn’t exactly sure whether this is a short-term coaching gig or something that perhaps leads to greater opportunities and a fulltime vocational pursuit.

He got a taste for life with the clipboard under Australian sevens coach Tim Walsh and admits that returning home to coach Randwick in the Shute Shield is a bucket-list item.

And he is adamant that the man in charge in LA, Darren Coleman, has the ability and temperament to be a successful Australian Super Rugby coach at a time when they are short in stock.

“He’s a pretty upfront and honest type of guy, and I think he was pretty disappointed that he missed out on that Waratahs job a couple of years ago,” Hoiles said of Coleman. “And since he took Gordon to that premiership, which was his second with two clubs in four or so years, there’s definitely been some interest there and I know that there was some more interest from other Super sides and there still should be. So yeah he’s definitely capable of coaching at that level.

“But at the same time he’s doing this for two years, and he’s bringing his family over. And it’s similar to a few of the young Australians; we see the guys that are over here, there’s guys like Mahe [Vailanu], who was the Ken Catchpole medal winner in the Shute Shield last year; Harrison Goddard; Christian Poidevin; these types of guys. If they have a good couple of years here it will only be better for Australian rugby, they’ve got two years in a fulltime program in what we’re hoping will be a much more intense MLR this season.

“So I think Darren is definitely capable of it but it’s disappointing that he hasn’t been given an opportunity up until now. But again, he’s still got plenty of years to go, he’s got a lot to offer and I think he’s got every intention of staying in this coaching game.”

At 25, Mason has taken up the chance for a change of scenery with the Austin Gilgronis, who are also being bankrolled by Giltinis owner Adam Gilchrist, but he hasn’t given up on his dreams of making it back in Australia and adding to the handful of Super Rugby caps he earned with NSW.

Guys like Poidevin, Goddard and Vailahu will also benefit from time in a professional system, Hoiles says, and could yet find their way home to rejoin the Australian system.

“I feel for some of the clubs back home in club land in Australia who have lost a fair few players and I get the grievances there,” Hoiles told ESPN. “But the way this season should run, I think it’s meant to be January-May type season here in the MLR, but because of COVID it’s been pushed back a little bit. So there’ll be a little bit of crossover here.

“But there’ll be opportunities for guys at the end of the MLR season, both Americans, Canadians and foreigners, to potentially go back down to a club competition in Australia or New Zealand and get a double season in. So I think it’s an opportunity for young blokes to come and play in a professional program, and that’s the big thing at the moment trying to make that step between club footy and Super Rugby…that can only be positive, as opposed to just playing 15 games in Australia.

“I’m a fan of the club system of course, but I just think if you’re a young guy and you’ve got an opportunity to go to the States and develop your game for a year or two, it’s not turning your back on Australian rugby, it’s just giving yourself the best opportunity to come back and be a better version of yourself in a year or two.”

Ashley-Cooper entered the Australian system when there was only three Super Rugby franchises and opportunities to play in either Japan or the U.S. just weren’t around.

Ten years later he would eventually head of for a stint in France with Bordeaux and then later Japan with Kobe Steelers, but his move to LA is about, besides lacing them up alongside his great mate Giteau, growing the game that has already given him so much.

“I think it’s a quality competition and it’s starting to grow quickly,” Ashley-Cooper told ESPN. “They’re starting to sign more and more players and, globally, they’re just much more aware of the game here. So it’s exciting to be sharing in that growth of the game.

“Initial thoughts from watching a few games already there are some talented rugby players here and it’s going to be exciting to see where this game heads in the States in the years to come.”

Ashley-Cooper shares a long history with Coleman and, like Hoiles, also has big raps on the man whose name keeps being mentioned amid the Waratahs crisis back home.

Ep 3 of ESPN Scrum Reset is in! This week @HulaBulaJim joins @ChristypDoran & @Sambruce86 to review Reds-Brums classic, look at some @wallabies selections & give an update on France’s visit Down Under https://t.co/cPfPrpNxU7

“I’ve known DC [Coleman] for many years, he was the coach at Norths in 2005/06 and that was my club team in Sydney,” Ashley-Cooper said. “And also he’s had a lot to do with the Brumbies, he’s coached the NSW Country Eagles, Central Coast Rays; so they were teams that I was affiliated with but actually never really played under DC.

“So it’s funny that I’ve known him for so many years, and also have a personal relationship with him, but this is the first time in five teams that I’m actually playing underneath DC, so it’s great to finally get that done.

“DC’s a great coach, a great guy, he’s had a lot of success at club level in Sydney; he’s been coaching professionally for 20 years or so and he certainly knows his trade. And he’s been getting the boys fired up over here, one of his strongest points is the cultural side of things for the team, he gets everyone well connected and that’s one thing that is working really well over here at the moment.”

Major League Rugby last week unveiled a new broadcast deal and also launched a streaming service where those based outside North America will be able to access the games for free.

If Stan Sport’s foray into the Japanese Top League is any guide, there will be more than just a few Australian eyeballs tuning in to see how the likes of Giteau, Ashley-Cooper, Dave Dennis, Billy Meakes and Co. fare on rugby’s latest frontier.

A bigger priority is generating local interest but Hoiles is bullish about the connection the Giltinis might be able to make with the people of Los Angeles and those further afield in California.

“I think the locals will enjoy it and I’ve been surprised by how many people actually know the game of rugby union over here,” Hoiles said. “It’s a high number of people just walking through watching the team, a lot of the locals can distinguish pretty early that you’re a rugby union side.

“And I think the competition will go up a notch from the last couple of years. It’s been a good competition, but I think they’ve been patient with the way they’ve developed the game over here. They’re doing it slowly, their numbers of players and the salary cap and things like that, they’re slowly growing; they’re not growing too fast too quickly.

Can the Giltinis win the whole shebang in their first season, then?

“So that’s the challenge for us, putting it together collectively and connecting as a team and putting that performance on the field.

“We had our first trial against Austin on the weekend and it was quite scrappy in certain areas, but we played some good rugby in other parts. So it’s a matter of putting that together and hopefully we can kick off this weekend with a win against the Free Jacks and it gives us something to build on.”