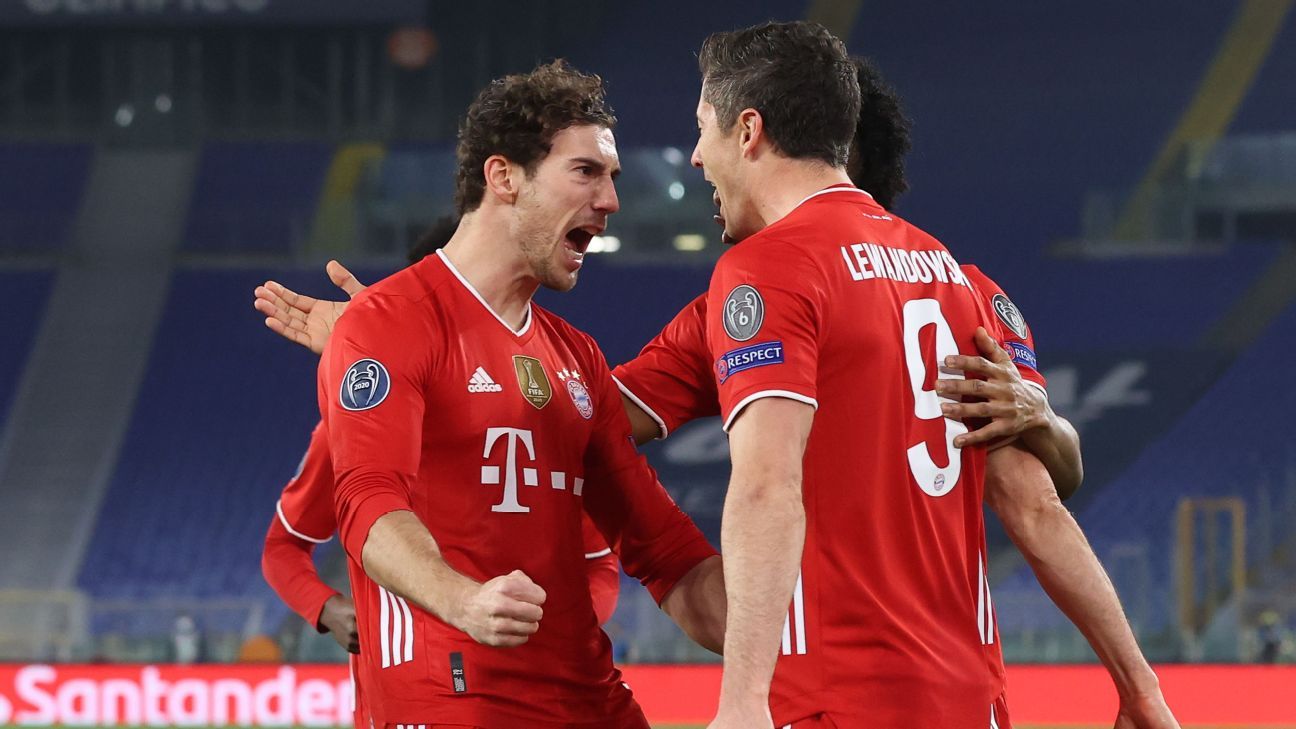 Pep Guardiola and Manchester City must navigate a daunting route to the club’s first-ever Champions League final after the draw for the quarterfinals and semifinals pitted the Premier League leaders against Borussia Dortmund and the winners of the clash between Bayern Munich and Paris Saint-Germain.

With UEFA mapping out the road to the final in Istanbul by drawing both the quarters and semis, the prospect of Liverpool repeating their 2005 Champions League success at the Ataturk Stadium depends on Jurgen Klopp’s team overcoming Real Madrid in the last eight, before facing the winners of the Chelsea-Porto tie. Prior to winning the Champions League in 2005, Liverpool beat Chelsea in the semifinal with Luis Garcia’s infamous “ghost goal.”

The draw also keeps alive the prospect of an all-English final, with a box office clash between Real and Bayern also possible.

With the route to Istanbul now clear, ESPN has attempted to predict how the final rounds will shape up — and who will meet in the final on May 29.

While Manchester City will be strong favourites to progress over a Dortmund team that’s outside the top four in the German Bundesliga, it could all go horribly wrong for Pep Guardiola’s team if they fail to nullify the threat of Erling Haaland.

The 20-year-old, whose father Alfie played for City between 2000-03, is a major summer target for Guardiola, but right now, he’s the biggest threat to City’s prospects of reaching the semis. Haaland is the top scorer in this season’s competition with 10 goals and will be unfazed by facing City, but Dortmund also have the attacking talents of former City youngster Jadon Sancho to cause concern for Guardiola and his players.

Dortmund’s weakness is at the back, as they’ve conceded nine goals so far this season in the competition. City, meanwhile, have allowed just one goal in eight Champions League games: a 14th minute goal in City’s 3-1 win over Porto back in October. But as impressive as City have been, they’ve not faced a striker of Haaland’s quality during a soft run to the quarters, so the tie is less clear-cut that it would seem on paper.

City’s overall strength, with the likes of Kevin De Bruyne and Raheem Sterling, should see them progress, but Haaland could turn the tie on its head.

Julien Laurens feels Dortmund’s quarter final vs. Manchester City is an interesting one for Jadon Sancho and Erling Haaland.

Although Porto shocked Juventus in the last round to reach the quarterfinals, the two-time Champions League winners were the team the other seven clubs wanted to draw.

Coach Sergio Conceicao has built a tough, under-estimated side at Estadio do Dragao, with the 38-year-old Pepe marshalling the defence in outstanding fashion against Juve. Sergio Oliveira‘s goal threat from midfield will worry Chelsea, but Thomas Tuchel’s team have been transformed since the German coach replaced Frank Lampard in January, going unbeaten in 13 games (all competitions). Their impressive Round of 16 win against Atletico Madrid also highlighted their emergence as a dangerous outsider in this season’s competition.

– Laurens: How Tuchel turned Chelsea around

Tuchel has got Chelsea organised defensively, and he’s also starting to get the best from Kai Havertz. Timo Werner is another player who is beginning to perform under Tuchel after struggling with Lampard.

While Porto have the ability and the coach to make life tough for Chelsea and push them all the way, it is difficult to see beyond the English club.

Julien Laurens explains why Chelsea and Thomas Tuchel will be ecstatic to be against Porto in the Champions League quarter-finals.

A re-run of last season’s final, which was won by Bayern in Lisbon, sees arguably the two favourites for this year’s competition go head-to-head once again.

Bayern have outscored every other club this season with 24 goals in eight games so far, but Hansi Flick’s team have shown vulnerability in the Bundesliga by losing twice — against Monchengladbach and Eintracht Frankfurt — in 2021. PSG have also struggled for their usual winning form, with Mauricio Pochettino’s team in an unfamiliar second place in Ligue 1 behind leaders Lille. But the Round of 16 elimination of Barcelona was a major psychological hurdle cleared by PSG due to their previous frailties against Europe’s elite clubs, and facing Bayern again has come at a good time for the French team.

If Neymar can return to full fitness in time after a lengthy spell out with a thigh injury, he and Kylian Mbappe could bring Bayern down. But right now, Bayern look most likely to come out on top in the closest of the four ties.

Julien Laurens says PSG struggle when being favourites to win, but won’t face that problem against Bayern.

It’s a repeat of the 1981 and 2018 Champions League finals, but also a clash between two sides that have struggled for form this season. Mohamed Salah‘s reunion with Sergio Ramos for the first time since the Liverpool forward was injured by the Real captain in the 2018 final will be a fascinating sub-plot to this tie, but the outcome is likely to be decided by which team defends best.

Liverpool’s defensive crisis caused by the long-term injuries to Virgil van Dijk and Joe Gomez has destabilised Klopp’s team, while captain Jordan Henderson‘s injury absence in midfield has also impacted on results. Yet Real have leaked goals all season, with Zinedine Zidane’s team conceding 10 in eight Champions League games. Liverpool, despite their problems, have only let in three goals in the competition this season.

The prospect of the ties being played at Real’s tiny Estadio Alfredo di Stefano at the club training ground, and the second-leg at an empty Anfield, will have an impact too, because both sides can usually rely on formidable home support in the latter stages of the Champions League.

This is a tie between an ageing Real and an injury-hit Liverpool, but if Salah and Sadio Mane are on form, Liverpool will win.

Bayern Munich vs. Man City: If the quarterfinals go as predicted, a Bayern vs. City clash in the semis is the most likely scenario, with City once again landed with the toughest possible route to the final.

Pep Guardiola spent three years at Bayern trying, and failing, to win the Champions League and it will be 10 years in May since he last guided a team to European glory, following Barcelona’s win against Manchester United at Wembley in 2011. City, of course, have never won the Champions League or reached the final and despite the incredible success he has delivered at the Etihad since arriving in 2016, they continue to wait for glory in the biggest competition.

In terms of the quality of teams and squads, there is little gap between City and Bayern, although the German club’s pedigree in the Champions League gives them the edge. They have been there and City haven’t, which matters in the final stages, with City lacking the psychological strength to overcome an inferior Lyon team in last year’s quarters.

The one area that could prove decisive. With Sergio Aguero struggling for fitness all season, City have lacked a reliable striker. Gabriel Jesus, simply hasn’t measured up as a replacement. Meanwhile Bayern have Robert Lewandowski, and the Polish striker’s reliability means that the reigning European champions are favourites to reach the final.

Liverpool vs. Chelsea: This Premier League clash became a Champions League grudge match during the 2000s, with Liverpool twice beating the London club in semifinals, in 2005 and 2007, before finally losing a third in 2008. This time around, if Liverpool overcome Real and Chelsea see off Porto, they could meet again at this stage for a fourth time.

Liverpool’s Champions League pedigree always counts in their favour, but they won’t be able to rely on a noisy, packed Anfield this time due to the COVID-19 pandemic. Chelsea won their last outing at Anfield in the Premier League earlier this month and Thomas Tuchel will believe he has the durability and confidence within his team to win again if they meet in the semifinals.

Both teams have had their struggles this season, but Chelsea have now found their form and they look fresh and strong under their new manager. If they do meet Liverpool in the semis, Chelsea will have the edge to book a rematch of their 2012 Final win against Bayern Munich.