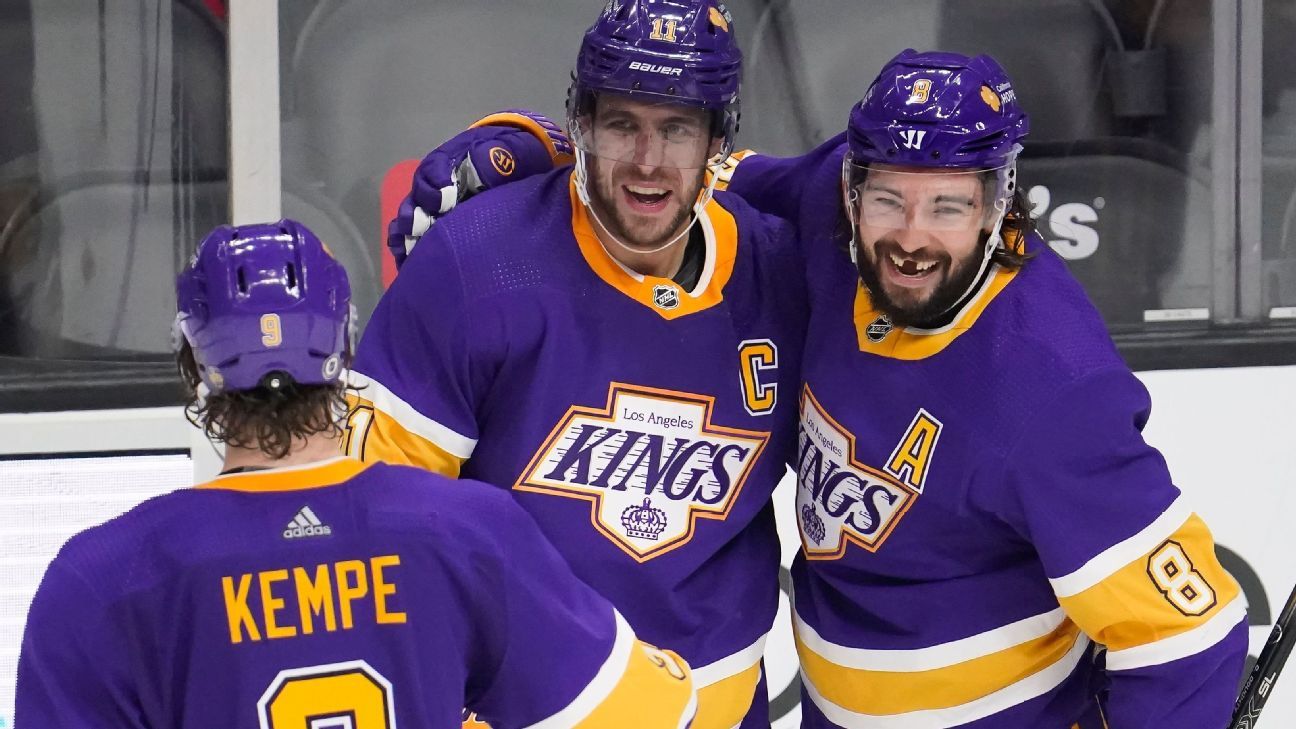 When looking at a particular type of fantasy production, there are a few ways to parse the data. While taking a look at power-play fantasy points, I was torn between looking at the statistics raw, as a rate or as a percentage. So I settled on a little bit of all three.

Brackets are open! Head to Tournament Challenge and fill out your bracket now!

For raw data, the leaders shouldn’t surprise anyone. It’s Connor McDavid leading the way with 45.5 PPFP and Leon Draisaitl right behind him at 43.8. There is a bit of a gap to Joe Pavelski in third at 35.2, which you probably could have guessed based on the season he’s having.

After that is when we start to see some interesting names. Anze Kopitar is 14th in overall fantasy points this season, but he’s fourth in PPFP at 34.6. The Los Angeles Kings man advantage has been incredibly improved. They have 26 power-play goals already this season in 28 games; last season the team had 33 in 70 games. The end result is that Drew Doughty is seventh in PPFP, Adrian Kempe is 23rd and Dustin Brown is 30th. For whatever reason, Kempe remains a free agent in more than 50 percent of ESPN leagues.

Fifth in PPFP this season is Ondrej Palat of the Tampa Bay Lightning. It follows that he’s already matched his career-high for power-play points in a season. If you had any thoughts that he might be a sell-high candidate in your league, shelve them.

Another player that caught my eye is Johnny Gaudreau. He’s 95th overall for fantasy points among skaters, but 11th for PPFP this season. If coach Darryl Sutter can find a way to get Gaudreau going at even strength, he could turn this season around. Here’s hoping we see Elias Lindholm at his side sooner than later.

Looking at rates, we’ll see who is doing well for PPFP per 60 minutes (PPFP60).

Hopefully the Chicago Blackhawks can realize Dominik Kubalik‘s production in limited power-play time. He has averaged barely more than two minutes per game and is currently on the second unit. But among players with at least two minutes per game, he easily tops the NHL with 23.2 PPFP60. Maybe the team can make room by sliding Ryan Carpenter or Carl Soderberg off the top unit?

The Winnipeg Jets basically have six options to stack on the power-play, so obviously someone has to miss out on the fun. But Nikolaj Ehlers has averaged just 1:34 per game in power-play time, yet among players with at least 40 total power-play minutes this season, he only trails Kubalik and Vincent Trocheck for PPFP60 (20.7). If given a chance with the top unit, I would anticipate a spike in fantasy production from him.

Wayne Simmonds has been practising with the Leafs again and is the definition of power-play specialist. Two of his 11 minutes per game before his broken wrist were on the power play and his PPFP60 (20.3) is ninth in the NHL for skaters with at least 10 minutes of power-play ice time. If he can get his role back on the Leafs power play, he might be worthy of a roster spot in deeper leagues.

The season-ending injury to Anders Lee might open the door for Oliver Wahlstrom to increase his opportunity. He’s already making the most of them, with 19.9 PPFP60 (10th in NHL) despite just 1:32 in average power-play time.

And for keeper leagues, stash Jake Bean. For all skaters with at least 10 minutes of power-play time, no one is close to his PPFP60. He’s only earned a meager 18 minutes on the man advantage, but has a goal and four assists for 29.3 FPP60. While Bean is a restricted free agent at the end of the season, Dougie Hamilton is unrestricted. Just saying.

When it comes to percentages, I’d just like to offer some caution when investing in fantasy players that have collected more than 40 percent of their total fantasy points on the power play. For some of them, that power-play time is not guaranteed going forward and, obviously, they need it to contribute to your roster.

Victor Olofsson of the Buffalo Sabres has amassed 61 percent of his total fantasy output through PPFP. If the new coaching staff finds a different look for the man advantage that doesn’t include Olofsson (which is easy to do on paper using both Rasmus’ on the blue line), it could be trouble. David Perron has 43 percent of his fantasy points this season via PPFP. The Blues top power-play unit doesn’t include Mike Hoffman or the soon-to-be-back Jaden Schwartz, so there is a world where Perron losses access to this key stat. Nick Ritchie is an obvious concern here, as the fourth forward on the powerful Bruins man advantage. Sure enough, 48 percent of his production is tied to PPFP. The Bruins have other options to try here if he stalls out at all. And I’m not super concerned with Cale Makar now that he’s back with the Avalanche and quarterbacking the power play, but Samuel Girard and Devon Toews did so well in his absence, that he can’t afford to slack off even the slightest. Makar has collected 44 percent of his fantasy production on the power play this season.

The vast majority of teams (24) are looking at a four-game schedule, so have a second look at your bubble roster choices this week. Especially if they are from the Los Angeles Kings, Toronto Maple Leafs or Vancouver Canucks, who are all only playing twice.

For those new to the forecaster chart, here are some explanations: “O” (offense), which is on the left for each game, and “D” (defense), on the right, matchup ratings are based upon a scale from 1 (poor matchup) to 10 (excellent matchup) and are calculated using a formula that evaluates the team’s season-to-date statistics, their performance in home/road games depending on where the game is to be played, as well as their opponents’ numbers in those categories. The “Ratings” column lists the cumulative rating from 1 to 10 of that week’s offensive (“O”) and defensive (“D”) matchups.

New York Rangers: With a single game, Mika Zibanejad went from 1.4 fantasy points per game (FPPG) to 1.7 (or from ranking close to 200th to close to 100th in FPPG). The Rangers have the Buffalo Sabres and two games against the Philadelphia Flyers (whom they beat 9-0 on Wednesday), plus a fourth game against the Washington Capitals. It’s safe to say Zibanejad should be back off the bench for the time being. But if you’re looking for someone you can add to your roster, don’t overlook that Zibanejad’s linemate Pavel Buchnevich is only rostered in 60 percent of ESPN leagues, while Colin Blackwell (on the second line with Artemi Panarin and Ryan Strome) is basically universally available.

Nashville Predators: This schedule is OK if Detroit Red Wings netminder Jonathan Bernier is healthy by next week and absolutely fantastic if he’s not. The Predators get the Wings twice and Blackhawks twice. Bernier has been the only thing keeping pucks out of the Red Wings net this season, so if they are forced to rely on Thomas Greiss, expect a scoring fest for the Predators through the week. Eeli Tolvanen is my go-to suggestion here, playing with Ryan Johansen and Filip Forsberg. But if you’re in a deeper league and he’s gone, consider Calle Jarnkrok, playing on the second like with Mikael Granlund and Viktor Arvidsson. Feel free to roll Matthias Ekholm, too, as he covers for an injured Roman Josi on the Preds power play.

Calle Jarnkrok records both of the Predators goals in their 2-1 win over the Panthers.

Jaroslav Halak, G, Boston Bruins: If Tuukka Rask isn’t back to split time next week, feel free to fully unleash Halak on your roster for the week. The Bruins have good defensive matchups against the New York Islanders, Buffalo Sabres and New Jersey Devils. If Rask (undisclosed injury) misses the whole week, Halak should get three of the starts and win two of them.

Brackets open on Monday night – create or join groups now to play with your friends!

Kasperi Kapanen, W, Pittsburgh Penguins: Already appealing as a fantasy addition because of the presence of Evgeni Malkin, the absence of Malkin might make Kapanen even more appealing. It’s because Kapanen, while not playing with as solid of a line at even strength with an injured Malkin, will get to replace the star center on the Pens power play. He has four goals and 11 assists in 10 games in March.

Cody Glass, C, Vegas Golden Knights: It may not last much longer as Chandler Stephenson and Alex Tuch are only labelled as day-to-day with injuries, but the combination of both of them out of the lineup elevates Glass to both the No. 1 center role and the top power-play unit.