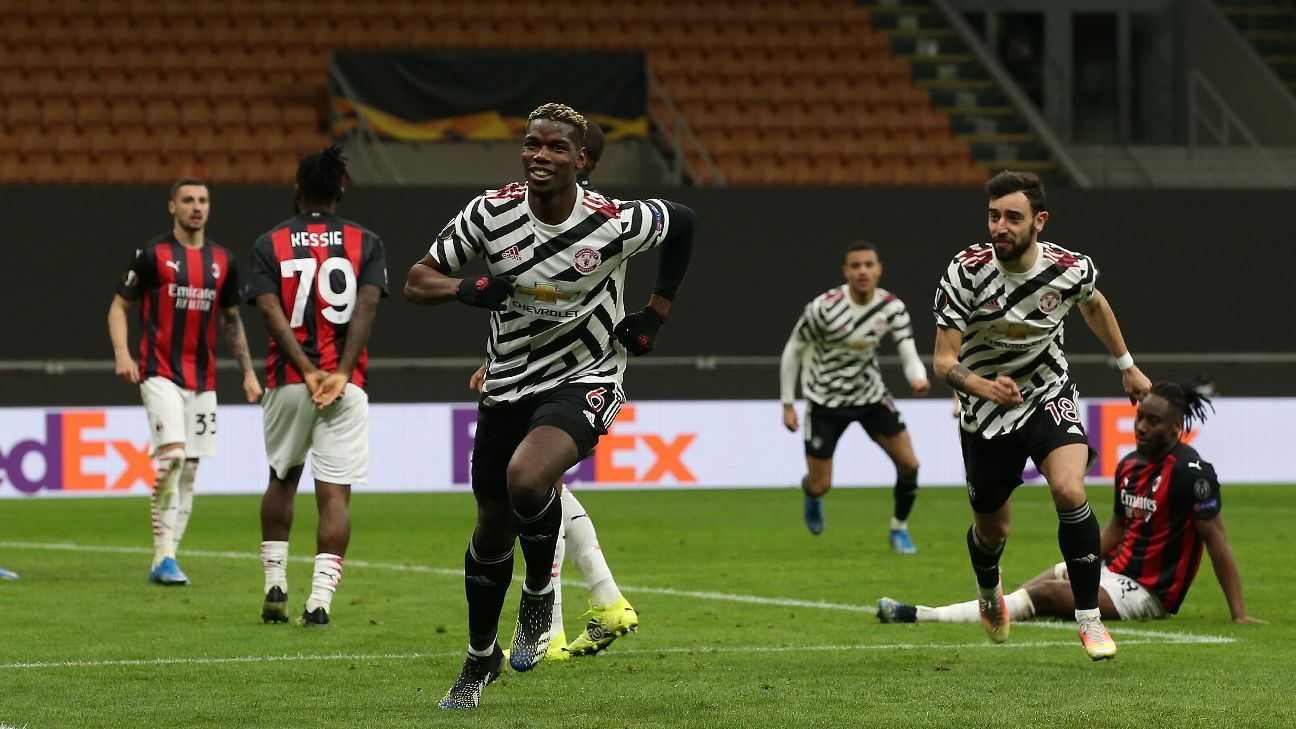 Ole Gunnar Solskjaer said this week that winning the Europa League would not necessarily prove Manchester United are making progress, but results like this are a good indicator.

Solskjaer’s argument is that a trophy can paper over the cracks, but the way which his team beat Milan 1-0 in their own backyard to move on to the quarterfinals should give the Norwegian belief that this players are learning how to win big games when it matters most.

Paul Pogba, on as a half-time substitute, was the match winner with a clever goal early in the second half. He has been missed during six weeks out with a thigh injury during which United have won only five of their 10 games.

“When you win a game of football away from home in a stadium like this, against a team like this you’re very happy,” Solskjaer said. “We started really well first 20 minutes, we looked like a very good team then a spell from half way through the first half to half-time when we rushed things, lost the ball too often, made it a long game. We just had to readdress a couple of things and second half I thought we were better.

“Let’s see who we get in the next draw. Today, we’re really happy because we’ve beaten a historically fantastic club and a very good team that’s really on the way up. So very pleased with everyone and of course we want to go all the way it was hard to lose in the semi last season.”

Make your picks throughout the Champions League and compete for $4,000 of Amazon.com gift cards! Make Your Picks

Make no mistake, Solskjaer wants to win the Europa League this season, but speaking on Wednesday he was firm in his opinion that winning any old trophy would not alone be a sign of progress.

He didn’t say it, but he could have easily been talking about lifting the FA Cup under Louis van Gaal in 2016 or winning the League Cup and Europa League under Jose Mourinho in 2017.

Arsenal, also in the quarterfinal draw, won the FA Cup last season, but are currently 10th in the Premier League. You won’t find many Arsenal fans claiming “we are back” and Solskjaer doesn’t believe United are either, but winning in the San Siro against the team second in Serie A is evidence they are on the right track.

Solskjaer has beaten Manchester City, Liverpool and Chelsea since taking over as manager, but his team have struggled when the stakes are at their highest. They are on a run of four straight semifinal defeats, but faced with an early exit from the Europa League in Milan they showed the maturity and composure to navigate a tricky European night.

Pogba’s goal — a skillful clip over Gianluigi Donnarumma after first fooling Milan’s goalkeeper with a feint — less than three minutes after replacing Marcus Rashford was the difference.

“Paul looked like he’d been out six weeks,” said Solskjaer. “He’s been working hard, but when you play it’s different. He couldn’t play more than 45 minutes, but he will get better and that’s a big boost to have him back. We know his qualities.”