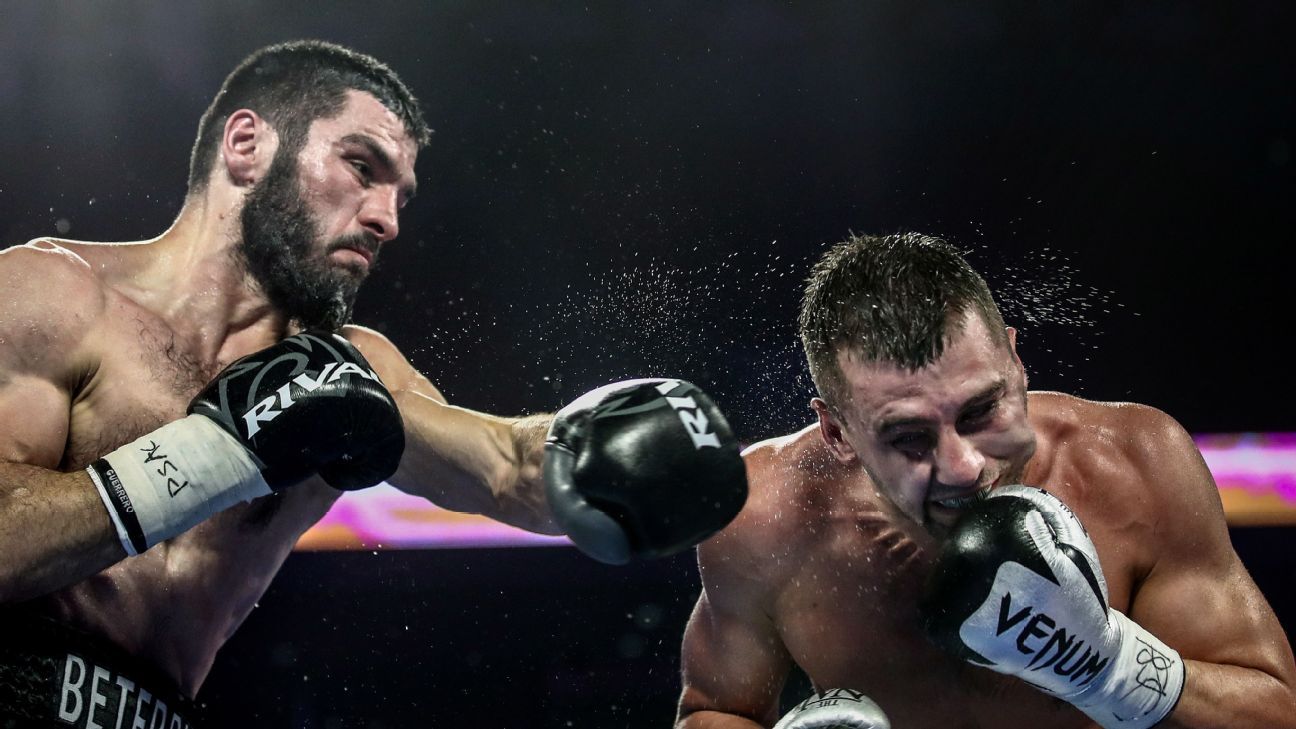 During his youth in Dagestan, Artur Beterbiev read a book on the sport of boxing that he still remembers to this day — and one line in particular.

“I read it as a child, and it was advice for a young boxer,” Beterbiev told ESPN. “It had an idea in the book that a championship competition is a feast for a boxer. Of course, I am very glad when I am in the ring.”

Like so many others, Beterbiev (15-0, 15 KOs) was deprived of an opportunity to compete in 2020. He was scheduled to fight last March, September and October, as well as January of this year. Each of those fights fell through, for a variety of reasons.

The IBF and WBC light heavyweight world titlist will finally defend his belts on Saturday, when he meets Adam Deines (19-1-1, 10 KOs) at the Khodynka Ice Palace in Moscow. The championship fight will air on ESPN. Beterbiev is currently a massive favorite, listed at -2500.

For Beterbiev, who trains out of Montreal, it will mark his first professional appearance in Russia, the country he represented in the 2008 and 2012 Olympics. The 36-year-old said he is “pleased” to be fighting at home, but his focus is always on areas other than the location of a fight.

“I am the kind of boxer who is thinking about the fight exclusively,” Beterbiev said. “I remember when I won the world championship and became the IBF champion [in 2017]. I collected the belt and said, ‘OK, there are other belts out there now. I can go ahead and collect the other belts.’ That is my motivation.”

The WBO title is currently vacant, while the WBA title is held by another undefeated Russian, Dmitry Bivol (17-0, 11 KOs). Bivol did not fight in 2020 either, and currently does not have a bout scheduled.

Beterbiev’s outlook on 2021 is currently bright, but he’s not thinking too far ahead. The highlight of his professional career thus far came in his last fight, when he claimed the WBC belt in a unification bout via 10th-round TKO against Oleksandr Gvozdyk in October 2019 in Philadelphia. — Brett Okamoto

When Vergil Ortiz Jr. was a kid, there was a routine for notable local pro fights.

The aspiring boxer would hop in the car with his trainer, Gene Vivero, and they’d drive to wherever the event was being held in the Dallas-Fort Worth area. Ortiz would get a hot dog, find his seat and settle in for the fights.

Ortiz and Vivero carried a strong bond, even after Ortiz turned pro and went under the tutelage of Robert Garcia, one of boxing’s best trainers. Unfortunately, Vivero died on Feb. 14 at the age of 71. For Ortiz, this bout in Fort Worth against Dallas’ Maurice Hooker is an amazing opportunity but also bittersweet.

“It’s still a lot to process,” Ortiz told ESPN. “He’s been there for most of my boxing career. He’s taught me a lot of things in and outside of the ring.”

Ortiz and fellow Dallas-area fighter Errol Spence Jr. started their careers at the Vivero Boxing Gym in Oak Cliff, a neighborhood in southwest Dallas. At first, Ortiz started visiting the gym for a couple of weekends when he was around 10. Eventually, he called Vivero’s gym home as he built a strong amateur career.

To hear Ortiz tell it, Vivero had a way of balancing humor with blunt honesty. He passed down stories from his years fighting and training in Dallas. And when it came to helping those around him, Vivero was always generous. In addition to providing some financial assistance, Ortiz said, Vivero used to pick up fighters from gyms for training. All of that was encapsulated when Ortiz and Vivero went to pro fights together.

“He would pay for my food and he would drop me right back off,” Ortiz said. “He would take me to professional fights to get used to the scene and all that. I’m telling you, he did a lot.”

Now, Ortiz (16-0, 16 KOs) is the one headlining a card roughly 20 miles west of his hometown. Hooker (27-1-3, 18 KOs), a former junior welterweight champion, represents the toughest test of Ortiz’s pro career as both men are looking to make their mark on a crowded welterweight division headlined by Spence.

Ortiz said the regimen he and Spence received early in their youth careers is a reason for their pro success. A normal day could include three to four miles of running, bag work and then sparring against anybody in the gym.

“Even if a little kid doesn’t have it, you can still put it in them,” Ortiz said. “I feel like I had it and they just instilled more of that inside me. Errol as well. He’s a tough motherf—er. He’s not a pushover at all. I think that’s where we get it from.”

Ortiz has dreams of fighting Spence one day. But with a big win over Hooker, Ortiz could set himself up for a potential title shot in the near future.

The 22-year-old wishes his former trainer could be ringside for this weekend’s big fight. Ortiz knows what the message would have been as he approaches a pivotal moment in his career.

“He would tell me not to be sad and keep working hard and take care of this fight,” Ortiz said. “That’s what he would want most of all, so that’s what I’m doing.” — Ben Baby

16 for 16: Just like Beterbiev, Vergil Ortiz Jr. has a 100% KO percentage with 16 knockouts in 16 fights. Six of those fights ended in the first round, including his first four bouts. He’s never fought past the seventh round, and this is Ortiz’s fourth scheduled 12-round fight. He’s 22 years old.

10 inches: Reach advantage for Maurice Hooker over Ortiz. Hooker is only one inch taller than Ortiz.