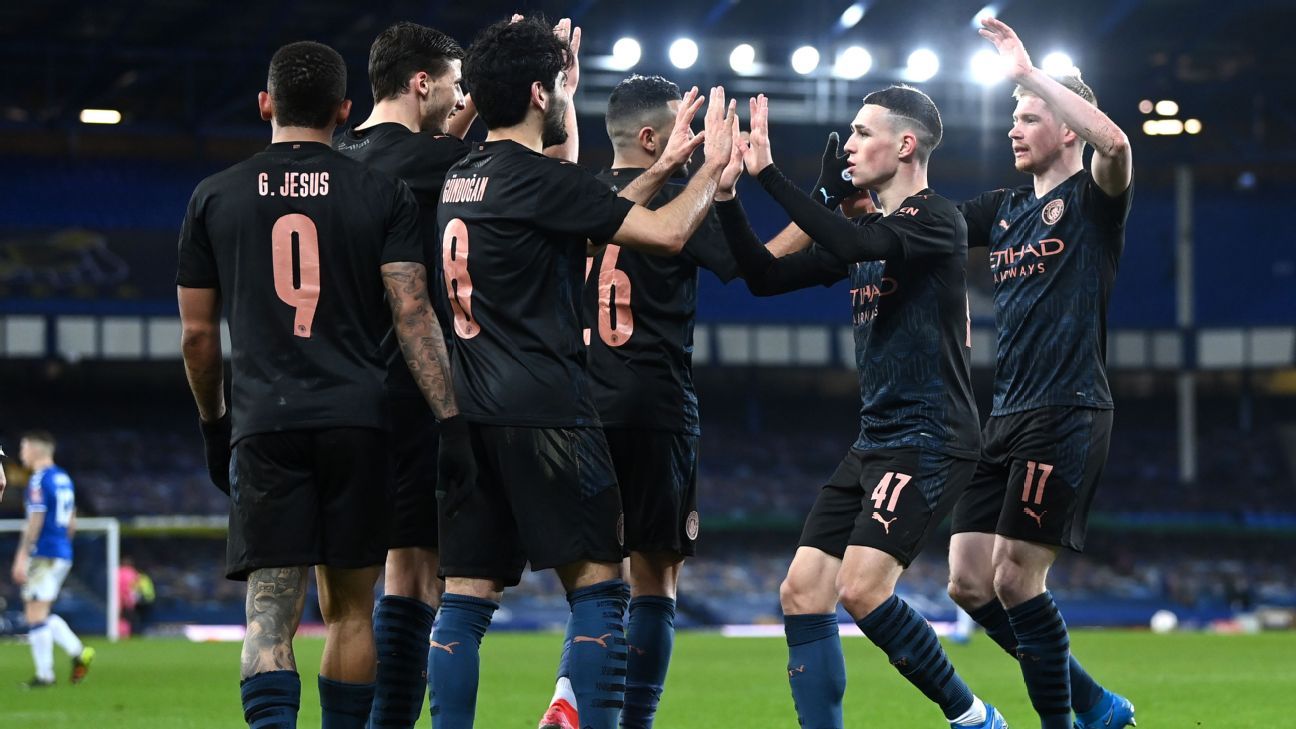 LIVERPOOL, England — It is a testament to Manchester City‘s achievements under Pep Guardiola that making history has become so routine that it barely seems to register. But after beating Everton 2-0 at Goodison Park on Saturday to seal a place in the FA Cup semifinals, City are as good as three victories from another domestic treble.

They left it late against Carlo Ancelotti’s team, with Ilkay Gundogan‘s 84th-minute header breaking the deadlock before substitute Kevin De Bruyne doubled the advantage six minutes later, but the end result was what we have come to expect from this City team: a win.

In cup competitions this season, City have won 15 and drawn one of their 16 ties, with the draw coming in a meaningless Champions League group game against FC Porto. And in recent months, they have won 25 of their past 26 games in all competitions, with the only blip coming in a 2-0 defeat against Manchester United earlier this month.

The loss at home to United at least showed that City can be beaten on an off-day, but those days tend to come around as rarely as Halley’s Comet, so we may be waiting a while for the next one. That’s why there is now a sense of inevitability about their pursuit of all three domestic trophies. When City won all three — Premier League, FA Cup and Carabao Cup — in 2019, it was the first time it had been done in English football history and it was quite rightly lauded as a unique achievement. But here we are, two years later, and they are odds-on to do it again.

With City still alive in the Champions League and set to face Borussia Dortmund in the quarterfinals next month, they may even go one better and pull off a quadruple, which would permanently eclipse United’s historic Champions League-Premier League-FA Cup Treble in 1999. But while the route to Champions League glory is blocked by the formidable presence of Bayern Munich or Paris Saint-Germain in the semifinals, the path to domestic glory is less hazardous.

With a 14-point lead over second-place United (who have played a game fewer) in the Premier League, it will take an unprecedented collapse by City for Guardiola’s men to miss out on a third title in four seasons, so that success is all but guaranteed. In the Carabao Cup, Jose Mourinho’s Tottenham Hotspur could shock City in the final next month, but not if recent form is anything to go by. And in the FA Cup, although Chelsea, United and Leicester City could yet thwart City, the reality is that Guardiola’s team would be favourites beat all of them if they faced them in the semis or final. Southampton, who beat Bournemouth on Saturday to qualify for the semifinals, would not be expected to halt City’s charge either.

It was the manner of City’s win at Everton that was the most ominous warning to those clubs still left standing in the FA Cup, though.

Ancelotti’s team, desperately attempting to win the club’s first major trophy since lifting the FA Cup in 1995, pushed City all the way at Goodison. They stood firm at the back, with third-choice keeper Joao Virginia and centre-back Ben Godfrey particularly impressive. In midfield, Allan enjoyed a bruising tussle with Fernandinho while Dominic Calvert-Lewin and Richarlison made life difficult for City centre-backs Ruben Dias and Aymeric Laporte. But despite their efforts, Everton could not test City keeper Zack Steffen, deputising for first-choice Ederson, sufficiently to score on a day when Guardiola’s players lacked their usual fluency.

City’s depth of quality is why they are closing in on a repeat of the treble. With the game heading to extra-time, Guardiola was able to call on De Bruyne and Riyad Mahrez from the bench and Everton eventually succumbed when Gundogan scored the opener after Laporte’s shot had been tipped onto the bar by Virginia. When De Bruyne made it 2-0 shortly afterwards, it ensured a scoreline which did not reflect the balance of the game, but that is a measure of City’s ability in that they were able to soak up pressure and win the tie late on.

“It was a really tough game,” Guardiola said. “We saw the commitment from Everton, how focused they were and they defended really aggressively, but we conceded nothing, we were patient. It was one of the toughest games we’ve played in the last four months.”

Guardiola is right, it was a hugely difficult game for City, but despite the challenge, they still overcome it to win. That’s what this City team does, week after week after week, so it is becoming impossible to see anyone stopping them in England.

Bayern or PSG may prove to be immovable objects in the Champions League, but City have won six of the last nine domestic trophies contested, and right now there looks to be only one winner in England, in every competition, and that is Manchester City.