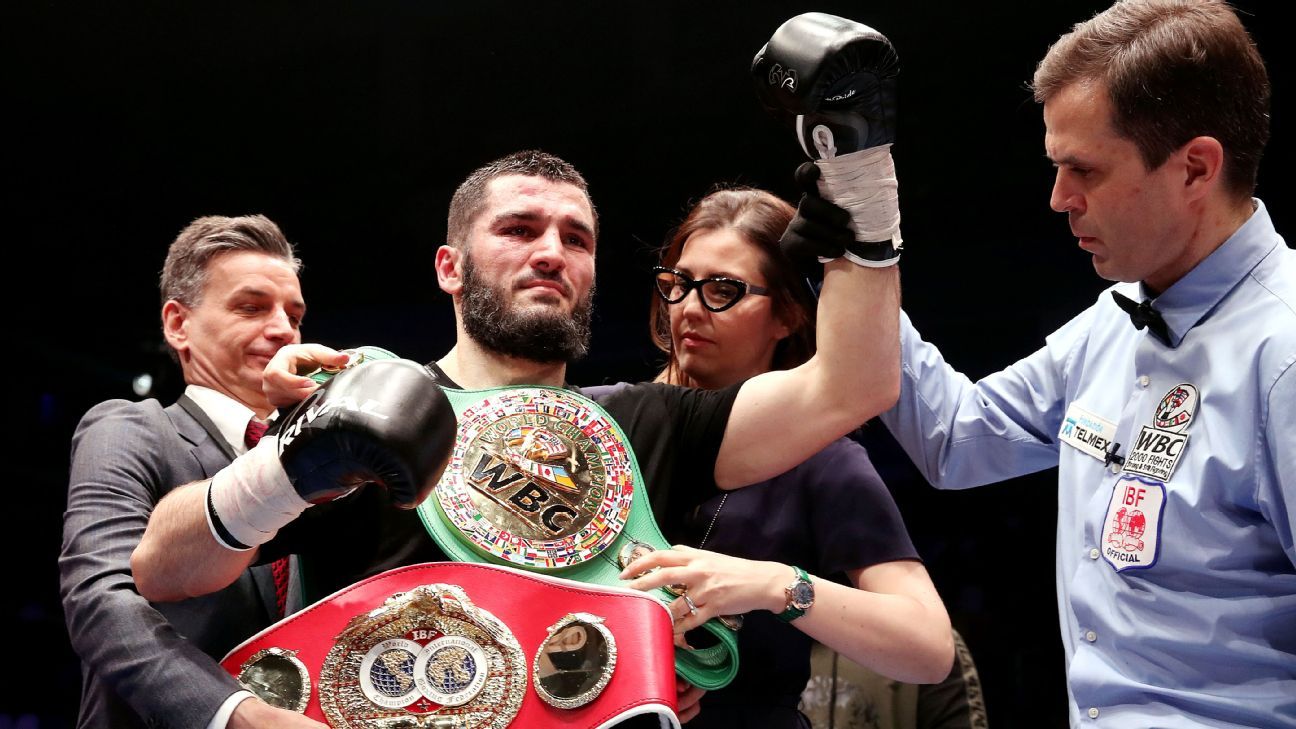 After a 519-day absence, Artur Beterbiev picked up where he left off as he extended his 100% knockout record with a tenth-round TKO win over Adam Deines Saturday.

The Russian power-puncher ensured he remained boxing’s only world champion with a perfect KO record when he ended the stubborn resistance of Deines with a short left hook at the Khodynka Ice Palace, Moscow.

Beterbiev (16-0, 16 KOs), 36, had not fought since he impressively stopped Oleksandr Gvozdyk to unify two world light-heavyweight titles in October 2019, and he took longer than expected to finish Deines, who also hit the canvas in the first round.

Beterbiev won by tenth round TKO for the second time in a row, in a fourth defense of the IBF belt and first of the WBC title he won from Gvozdyk.

For Beterbiev, who trains in Montreal, Canada, it was the finish the crowd in Moscow had come to see in his first professional appearance in his native Russia, who he represented at the 2008 and 2012 Olympics.

But Russia-born, Germany-based Deines (19-2-1, 10 KOs), 30, lasted longer than was expected after he recovered from a first round knockdown to show plenty of courage and return fire after taking Beterbiev’s power punches.

This win keeps Beterbiev king of the light-heavyweight division, which is dominated by Russians. Beterbiev’s fellow Russian Dmitry Bivol (17-0, 11 KOs), who defends his WBA title against Craig Richards on May 1, is perhaps the most appealing fight to be made.

However, another unification fight against the winner of the vacant WBO title clash between Joe Smith Jr (26-3, 21 KOs), from New York, and Maxim Vlasov (45-3, 26 KOs), from Russia, on April 10, is an easier fight to make as Top Rank promotes both Smith and Beterbiev.

Whoever is in the opposite corner next for Beterbiev, they will face the most lethal world champion in boxing today. Beterbiev has not forgotten how to knockout opponents during his enforced layoff due to the coronavirus pandemic, and put Deines down before the end of the first round with a straight left followed by a short, glancing right.

Deines bravely rallied in the next two rounds, taking the fight to the champion but found himself under siege early in the fourth round. Beterbiev unloaded two left uppercuts and dug right hands into the body in a dominant fourth round.

Deines was under constant pressure in the fifth and sixth rounds but gamely put together flurries of punches on the counter attack. Beterbiev hurt Deines with left hooks late in the sixth, but Deines then enjoyed his best round in the seventh.

Beterbiev, who tested positive for COVID-19 in December which caused this fight to be moved back from January, eased off the tempo in the seventh and you began to wonder if the Russian was going to go the distance for the first time.

It took a while, but Beterbiev found the opening in the tenth round with a short left hook to the jaw that turned Deines legs to jelly and sent him down for the second time. Deines’ corner were holding the towel as the fight was stopped.

If Beterbiev, Bivol, heavyweight Alexander Povetkin and junior-lightweight Mark Urbanov are Russian boxing’s current stars, Pavel Silyagin (7-0, 4 KOs) looks like one for the future after a unanimous (108-120, 109-119, 109-119) points win over Azizbek Abdugofurov.

The tall super-middleweight, 27, boxed fluently in a statement win over the WBC world No. 4 Abdugofurov (13-1, 5 KOs), from Uzbekistan, to put him on the radar of the elite at 168 lbs. Silyagin picked up the fringe WBC Silver title, in a step towards challenging for the WBC world title held by Mexico’s Saul ‘Canelo’ Alvarez.

Silyagin picks his punches well and troubled Abdugofurov with a stiff right hand at the end of the first round, and then landed a series of punches through the fourth. It was a risk matching Silyagin against a more experienced opponent, but the Russian dominated through his technical ability. Abdugofurov caused some local concern with a counter hook in the eighth round, but Silyagin took it well and was soon back into his rhythm.