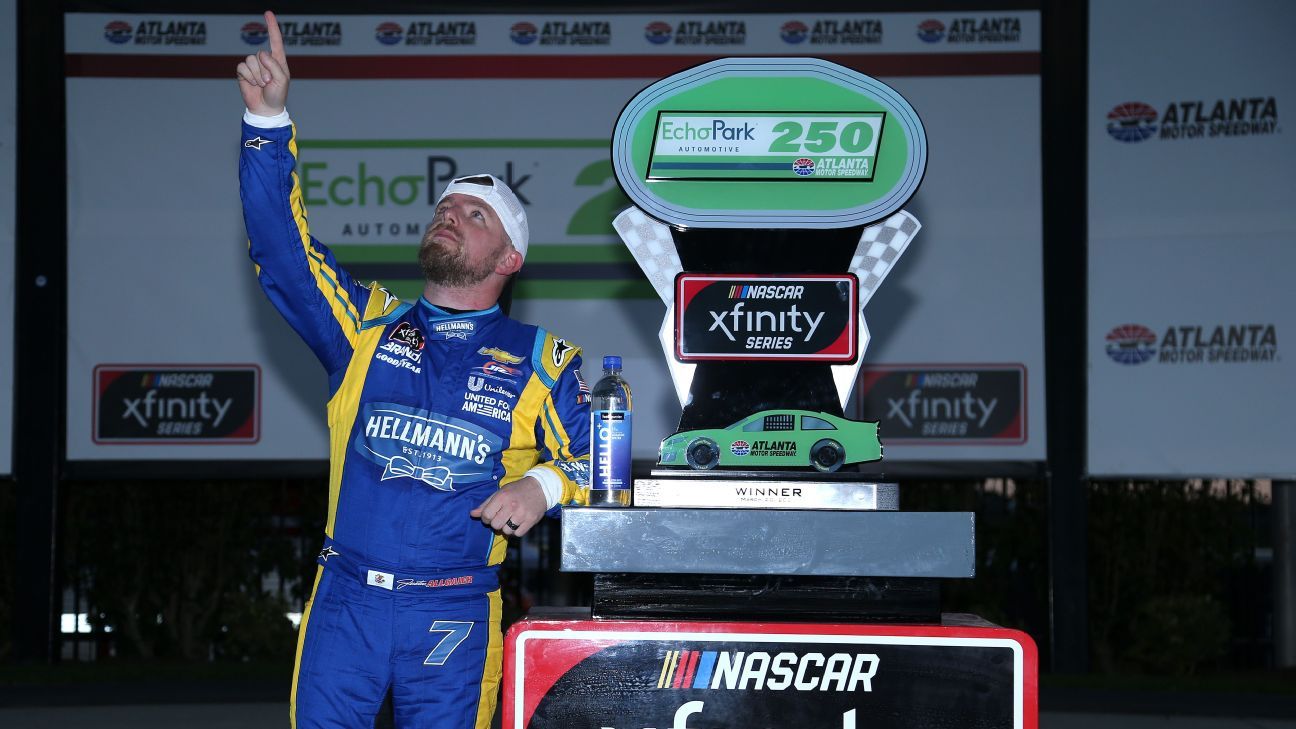 HAMPTON, Ga. — Justin Allgaier snatched the lead after Martin Truex Jr. made a mistake on pit road, and then held off his furious charge at the end to win the NASCAR Xfinity Series race at Atlanta Motor Speedway on Saturday.

Allgaier’s celebration was marred by a scuffle on pit road between Noah Gragson and Daniel Hemric, whose cars had gotten into each other on pit road during the race.

Hemric came over to confront Gragson while he was doing an interview. Gragson took several swings, but appeared to miss before crew members and officials stepped in to separate the drivers. Neither was hurt.

Truex, racing in the second-tier series for the first time since 2010, dominated the first two stages and seemed headed for an easy victory until he got caught speeding on pit road.

The 2017 Cup champion had to drop to the back of the field as a penalty, but he quickly snaked his way through the field. Truex got within a half-second of the lead in the closing laps, but Allgaier pulled away for a 1.449-second victory in his JR Motorsports Chevrolet.

The victory was a big relief for Allgaier, who struggled mightily through the first four races before finishing eighth last week at Phoenix.

He used that momentum to take the checkered flag for the 15th Xfinity victory of his career ahead of Truex. Harrison Burton was third.

“We didn’t start off the day like we wanted to, but the guys persevered,” Allgaier said. “They made some great adjustments on pit road.”

Truex started from the 18th position in his Joe Gibbs Racing Toyota but needed only seven laps to claim the lead in his his first Xfinity Series race since the final event of the 2010 season at Homestead.

Truex had 13 victories in the NASCAR feeder series, the most recent coming on April 29, 2006, at Talladega.

“I had a lot of fun,” said Truex, who won series championships in 2004 and ’05 to propel his move to the Cup series. “Obviously, we were really strong in the first two stages. Then I screwed up and sped on pit road. I probably gave away any chance for the win.”

Gragson, who bounced back from an early wreck to take a fourth-place finish, was caught off guard by Hemric’s confrontation.

“I don’t know why he’s mad,” Gragson said. “I was behind him coming into pit road and he’s in our pit box, so I had to come around him. I’m not really sure why he was there.”

Gragson took a verbal shot at Hemric, who has yet to win in any of NASCAR’s top three series.

“I would feel bad if I was in his shoes, too, based on what he’s done in his career,” Gragson said. “I’ll just move on, keep on fighting. Man, what a day.”

“There’s a hole in the nose of my car and he got popped in the eye,” said Hemric, who finished ninth. “From where I stand, we’re in good shape.”

Josh Berry‘s day ended with a spectacular spin. He lost it coming out of turn four and plowed into the grass at the head of pit road, his splitter digging into the ground to send turf flying.

Berry was able to climb from his car, which sustained heavy damage.

A big wreck on the final lap of the first stage collected Gragson and several top cars.

Brandon Jones got a good run along the wall coming off turn two, powering past Brett Moffitt running in the middle of a three-wide pack.

As Jones surged by, Moffitt tried to tuck in behind him but appeared to clip Jones’ back bunker, sending him into a spin that also damaged the cars of Gragson, A.J. Allmendinger and series leader Austin Cindric.

Like Gragson, Allmendinger also fought back from the early trouble to take a strong fifth-place finish. Cindric settled for 13th.