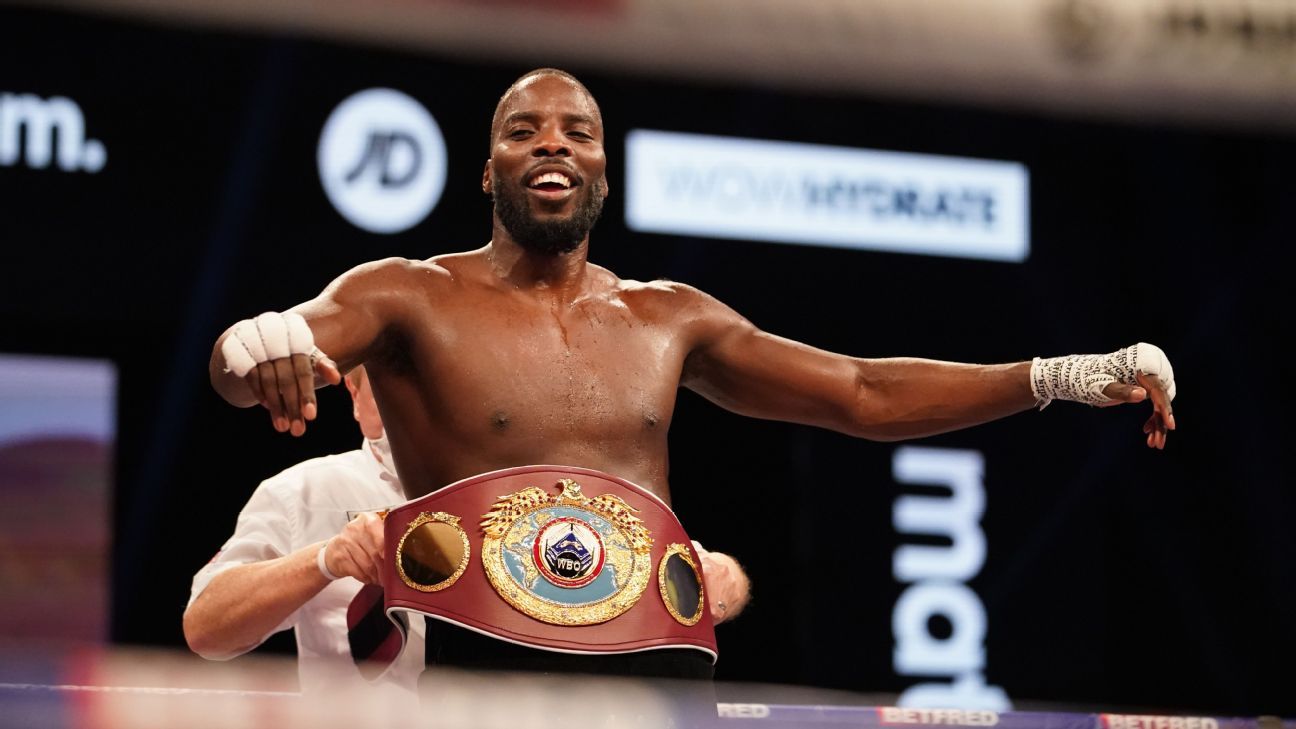 Lawrence Okolie announced himself on the big stage with a bang when he knocked out Krzysztof Glowacki in the sixth round to capture the vacant WBO world cruiserweight title Saturday at the SSE Arena in London.

Okolie’s knockout came at 46 seconds of the round. He became the first boxer from heavyweight titleholder Anthony Joshua’s management company to win a world title.

Okolie took up boxing when he was inspired by Joshua’s gold medal triumph at the London 2012 Olympics. At the time he was working at a McDonald’s in London.

Now he has his first world title in his 16th professional contest.

“It’s surreal,” Okolie said. “I’ve been really calm all week. It went how I wanted. I was sure I was going to get to him. [Trainer] Shane [McGuigan] reminded me not to rush.”

Glowacki, 34, the former WBO titlist from Poland, was the most experienced opponent Okolie had faced, and Saturday’s performance showed he belongs at the elite level. Glowacki had only suffered two previous defeats: to Oleksandr Usyk, who unified all four world cruiserweight titles and is boxing at heavyweight, and Mairis Briedis, the current IBF titleholder.

“We want to go straight for all the titles and unify and then move up to heavyweight,” Matchroom promoter Eddie Hearn said.

Okolie, known as “The Sauce,” said he wants to unify the cruiserweight world titles against the likes of Briedis or WBC titleholder Ilunga Makabu before then moving up to heavyweight, just as Usyk did.

“Briedis is the one I am looking for,” Okolie said.

Okolie, 28, walked to the ring to the sound of his own rap single released earlier this month, and he was full of confidence after registering five straight stoppage wins.

While Okolie benefited from a dominant victory over Glowacki’s countryman Nikodem Jezewski in December, Glowacki had not boxed since being stopped in three rounds by Breidis 21 months ago. Glowacki’s layoff was extended after he tested positive for the coronavirus in December, causing his fight with Okolie to be pushed back three months.

But rust had nothing to do with the outcome of Saturday’s fight, which was decided by Okolie’s tidy boxing and one-punch power.

Glowacki, who made one defense of the WBO title in 2016 before losing it to Usyk, found himself pressed back by the 6-foot-5 Okolie’s jab in the early rounds. Glowacki, five inches shorter than Okolie, struggled to get close to the English boxer, who was content to box patiently behind the jab rather than land power punches early on.

But in the fourth round Okolie loaded up on his punches more and landed two successive right hands to Glowacki’s jaw. Glowacki ended the round shaken and was cut by his right eye.

Blood began to stream down Glowacki’s face after Okolie planted a long jab on the cut in the fifth round, as the Londoner strengthened his grip on the fight.

Glowacki was looking a bit lost when Okolie set him up with the jab before landing a crunching right hand to the Pole’s chin. Glowacki crumpled to the canvas, got to his feet at the count of nine but was on unsteady legs, and referee Marcus McDonnell stopped the fight.