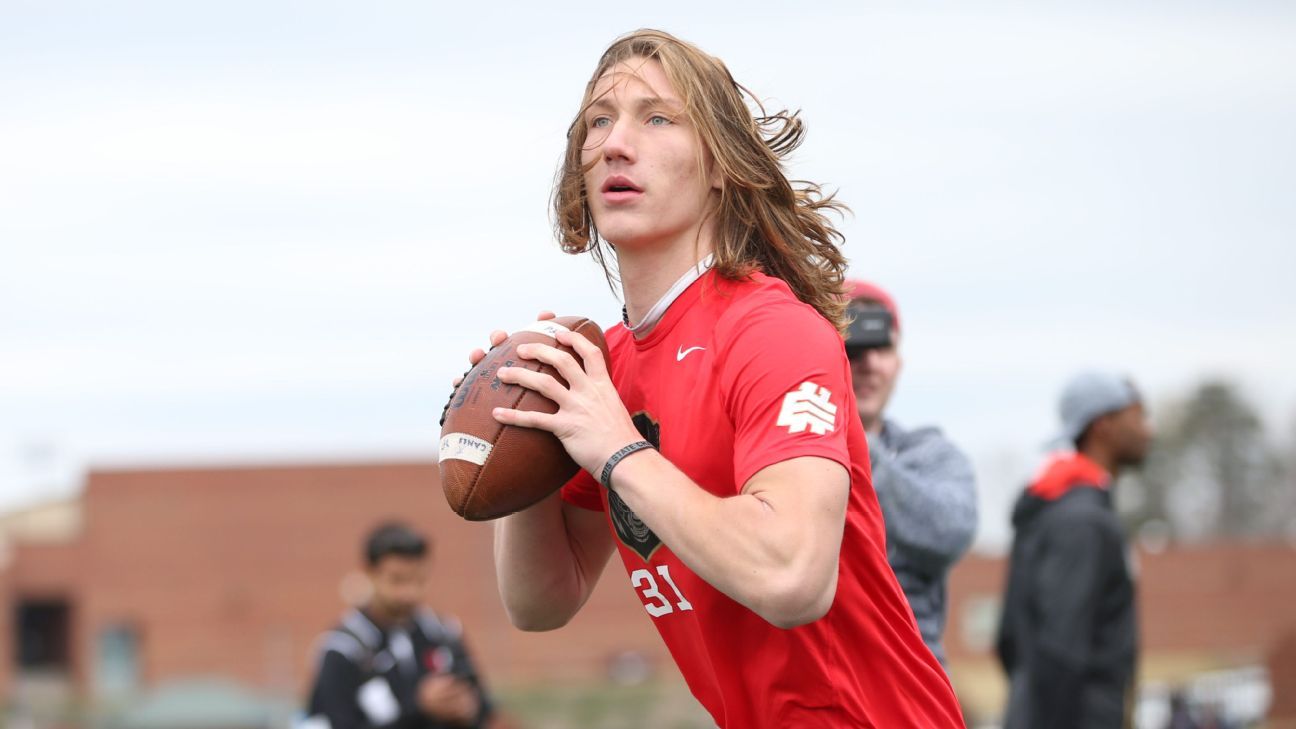 Greatness can sometimes come in second.

We’ve had some unbelievable college football talents land at our No. 2 ranking in the ESPN 300, a few who would challenge for the all-time No. 1 spot.

We’ve also had some underperformers who, if ranked now, wouldn’t land in the top 10 for their respective class.

It’s possible to make the argument that no freshman quarterback over the past 15 years has made a smoother transition from high school to college than Lawrence did, having won the national championship in his first season with the Tigers. The same argument could be made that if you re-ranked the top overall prospects over the past 15 classes that Lawrence would be No. 1 overall. He could not have been more as advertised physically and will surely be the top player chosen in this year’s NFL draft.

When Jones arrived in Tuscaloosa, there were few wide receivers in college football who even closely resembled his physical makeup. Granted, it took a bit for Jones to develop consistent ball skills and hands, but he was clearly a mismatch from day one. He capped off a spectacular junior season with 78 catches for 1,173 yards and seven touchdowns on his way to becoming the sixth overall pick in the 2011 draft class.

Pound for pound, Harvin may be the best overall offensive weapon to come out of high school over the past 15 years. The ultimate utility player was a nightmare to contain at the collegiate level. He could play any skill position on offense and was dominant in doing so. He finished his Florida career with 32 touchdowns and a whopping 11.6 yards per touch. His production was hampered by injury throughout his career, but still managed to become the 22nd pick in the 2009 NFL draft.

Peppers was expected to be an impact player the moment he stepped on campus in Ann Arbor, but it was a slow burn to becoming the player he was expected to be. He saved his best year for last as a safety, nickel linebacker, return man and part-time running back on his way to being a 2016 consensus All-American, Big Ten Defensive Player of the Year and Heisman finalist. The Cleveland Browns drafted him 25th overall in 2017.

Te’o, for the most part, was as advertised. As a four-year starter for Notre Dame, he lived up to the hype and led his team to the 2012 BCS national title game as a senior. He left the college ranks as one of the most awarded postseason players ever following his 2012 campaign. A true middle linebacker, Te’o lacked range and pass-rush skill to make him a more versatile, hot commodity for NFL franchises, thus leading him to be taken in the second round of the 2013 NFL draft by the San Diego Chargers. He played the 2020 season with the Chicago Bears.

In the initial evaluation process, Lawson was at the time still a bit of an under-the-radar prospect. Clicking on his film, he caught your attention with his explosiveness, and he quickly ascended up the rankings. At Auburn, he proved to be among the top defenders out of the 2013 class, earning all-conference as well as All-American honors with the Tigers. He slid to the fourth round of the 2017 NFL draft.

Offensive tackle is one of those premium positions, so it’s not surprising that Little, a lengthy and nimble big man, landed at No. 2 five years ago. Possessing many of the tools coveted in an elite left tackle, he was a consensus top player at his position coming out and didn’t disappoint with his play at Ole Miss. A quick contributor for the Rebels, he was a multiyear starter and established himself as one college football’s best tackles during his stint.

A prospect from New York had never occupied one of the top two spots in the ESPN 300 until Wilson. A massive physical presence who was powerful with good feet, Wilson was equipped to be a premier college offensive tackle. A bit raw coming out of high school, he initially redshirted, but over the next two seasons he was among the top tackles in the country. A first-round selection in the NFL draft, his pro career has gotten off to a rocky start, but during his brief playing time in Athens, he performed to a five-star level.

One aspect of the 2010 cycle that immediately comes to mind was that no prospect emerged as the clear No. 1, although Jeffcoat was continually in that mix. The son of a former NFL defensive lineman and defensive line coach Jim, Jeffcoat blended physicality with technique and football savvy, demonstrating the tools necessary to be an excellent college defender. His career may not have quite matched his lofty ranking, but make no mistake: He was still a highly productive player for the Longhorns who proved to be among the best from his class.

This was another year where no clear-cut No. 1 ever emerged, but throughout the process Beckner was near the top of the rankings. Beckner was not only powerful and explosive, but he was also agile for his 6-foot-4, 298-pound frame entering college. He showed he was capable of being a disruptive force in the trenches. Knee injuries impacted his career early on, but when healthy, Beckner proved he could be the handful that he was touted to be coming out in the 2015 class.

Landing behind Jadeveon Clowney in the 2011 class, Johnson was also an exciting defensive line prospect bursting with promise as well, only on the interior. Johnson was an explosive big man who notched nearly 70 sacks in high school and demonstrated the tools to wreak havoc. He was productive at LSU, earning second team All-SEC honors as a junior, but left school early and ultimately was never as impactful as the defender he was ranked behind.

Gray was uber-talented, but also uber-exhausted. By the time he arrived in Austin, he had logged a ton of mileage — 1,209 rush attempts in high school, which hindered his health and upside — and Gray could never quite replicate that success. He played four years at Texas, and while he totaled 2,610 rushing yards, he was never the star we thought he’d be. He was beat up and often while playing through injury.

The 2019 class was led by a pair of exciting edge defenders in Oregon standout Kayvon Thibodeaux and Smith, who placed right behind in the overall ESPN 300 rankings. The Georgia signee brought a wealth of tools that pointed to a bright future, posting impressive camp testing numbers, including a 4.51 40-yard dash and a nearly 40-inch vertical. Smith’s time at Georgia is not done, but he has lacked some consistency and has not quite met the lofty top-two ranking. He is a player to watch in 2021 as a breakout candidate.

The top-rated defensive prospect in the 2008 class, Galippo displayed all the tools to be a well-rounded and impactful college linebacker. A productive and physical high school player with a nice blend of size, headiness and range, expectations were high for the USC signee. He had moments when it seemed he might meet those expectations, like being named a Butkus Award semifinalist in 2009, but overall his career was plagued with back issues and inconsistency.

The 2020 five-star slots at the bottom, but only because his freshman campaign got off to a slow start and because he possesses the smallest body of work. The lengthy and agile defender progressed as the 2020 season unfolded and showed flashes of the exciting promise that landed him at No. 2 in his class. If we were to do this exercise again in five years, there are already signs indicating Evans would place much higher.