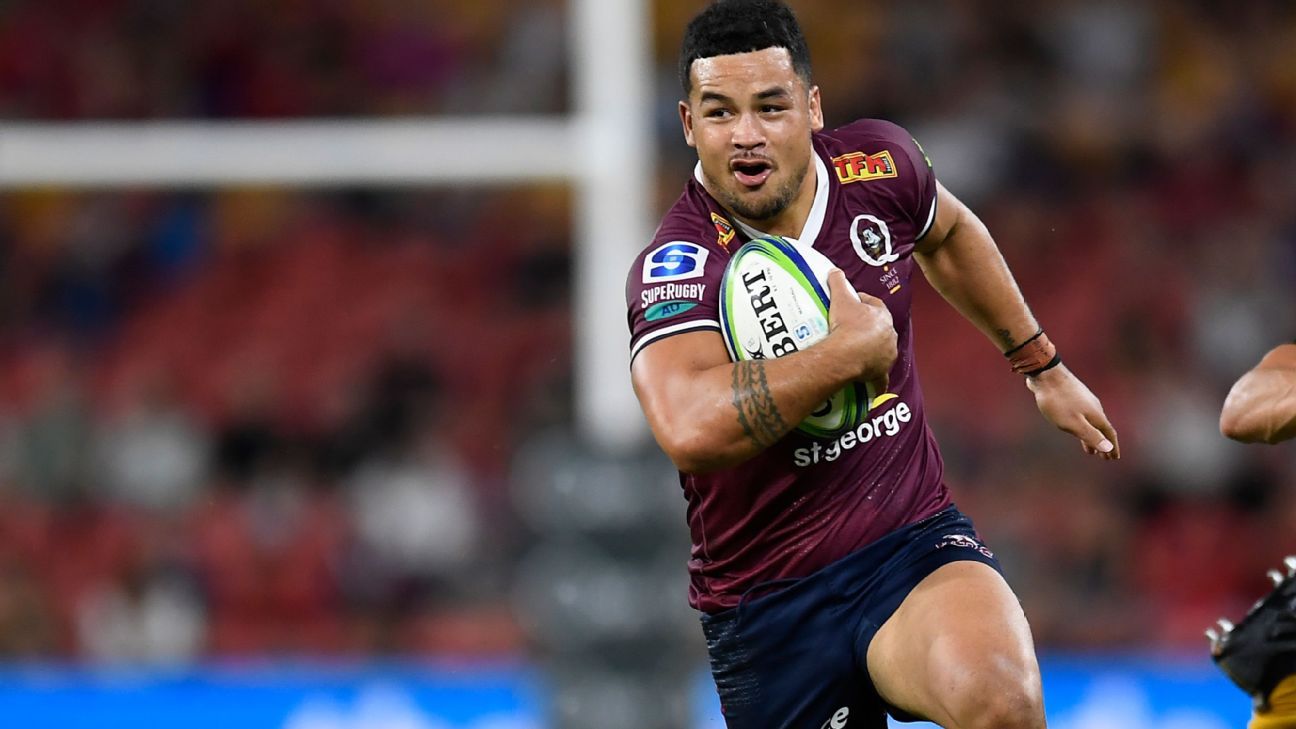 Another weekend of Super Rugby is in the books and there are clear competition leaders in both Australia and New Zealand.

With one full cycle of Super Rugby AU behind us, the Reds sit atop the ladder with a perfect 4-0 record; their 26-19 win over the Force a fourth victory on the trot.

And it is the same story across the ditch in New Zealand where the Crusaders head into the Round 5 bye with a blemish-free 4-0 record having put away the team that appeared to be their strongest opposition, the Blues, 43-27 at Eden Park on Sunday.

RENNIE HAS OPTIONS IN WALLABIES MIDFIELD

Wallabies coach Dave Rennie will next month hold a mini-camp on the Gold Coast as Test hopefuls come together for the first time this year.

There will likely be some new faces – and a few less Waratahs – among the group, but there is an exciting mix of in-form midfielders Rennie and his coaching staff will have to work with.

One of the senior players in the group will be Matt To’omua, who on Friday night wound back the clock in a brilliant display at fly-half for the Rebels. The highlight of To’omua’s night was a sensational solo try that saw him cut back to the other side of the ruck and into the backfield, chipping and regathering for himself in the face of Waratahs fullback Mark Nawaqanitawase, before a final dash to the corner.

After more than a year away from their AAMI Park home, it was a fitting moment for the local fans and To’omua himself as the Rebels went on to complete a comfortable 33-14 win.

To’omua was the Wallabies inside centre in the Tests in both Wellington and Auckland last year, before he picked up a groin injury at Eden Park, bringing an end to his season.

Hunter Paisami, the man he was paired with in both of those Tests, has also been in excellent form this year, a two-try performance against the Force coming after he had supplied the grubber kick for the match-winning try against the Brumbies last week.

Paisami has only improved since last year, showcasing skills that have proven he is just as capable at inside centre as he had looked in the No. 13 jersey last year.

The form of both men has given Rennie a pleasant selection headache, particularly with Len Ikitau and Jordan Petaia performing well at outside centre. Petaia, who ran onto Paisami’s kick for the match-winner last week, had probably his best game of the season against the Force as the Reds backline flexed their attacking prowess through a series of devastating breaks and classy offloads.

The form of all four midfielders is vital given their will ultimately be injuries through the Test season, particularly if the France series proceeds as it now seems likely to do.

The Waratahs won’t get anywhere near the 10 players they had in the extended Wallabies squad last year and rightfully so given the team’s terrible start to Super Rugby AU.

And the gaps that are created could well be filled with a handful of Force players who continue to put their hand up week in, week out.

The likes of skipper Brynard Stander, lock Fergus Lee-Warner and hooker Feleti Kaitu’u are surely right in contention for a Wallabies debut this year, particularly after the trio were central to the Force pushing the Reds all the way in Brisbane over the weekend.

What could fall in Stander’s favour is the fact that he plays much tighter to the ruck than the Brumbies’ Pete Samu, while Lee-Warner’s versatility and the Wallabies’ lack of depth at lock make him an excellent candidate for selection.

And the Australia hooker spot remains wide open with perhaps up to six genuine contenders, one of whom should be Kaitu’u given his solid performances at both set-piece and around the paddock.

While they have managed just the one win, what is noticeable about the Force this season is their ability to compete for 80 minutes, something that a lack of genuine preseason and a hap-hazard return to Super Rugby prevented them from doing last year.

They will only get better through the second half of the season, too, the signing of Sitaleki Timani – who could be another Wallabies smoky some eight years after his last Test – boosting their forward depth.

What they are lacking is that one genuine backline strike weapon and that was no more evident than in their seven-point loss to the Reds. While the Queenslanders rode the power plays of Paisami and NRL convert Suliasi Vunivalu, the Force instead had to rely on their determined but reasonably one-dimensional approach through the middle of the park.

Still, it is that approach that is allowing Stander, Kaitu’u and Lee-Warner to all push their Test case.

Conversely, you’ve got to wonder how Rennie can consider selecting any Waratahs whatsoever following yet another miserable showing on Friday night against the Force.

Youngster Will Harrison’s game is suffering badly at fly-half; Lachie Swinton continues to battle ill-discipline and winger James Ramm has barely touched the ball all year. All three players will have gone into 2021 optimistic their Test aspirations were headed in the right direction but they have likely all slipped down the pecking order in their respective positions.

MCKENZIE HELPS GET CHIEFS ON THE BOARD

They can rest easy in the Waikato at last.

The Chiefs on Saturday avoided a record-setting 12th straight defeat after a brilliant comeback win against the Hurricanes in Wellington, a victory that was inspired by Damian McKenzie’s switch from fullback to fly-half.

Down 26-7 with just 23 minutes to play, the Chiefs rocketed home on the back of McKenzie’s inspiring play to run out 35-29 winners and end a drought that extended beyond 12 months.

McKenzie’s finest moment came when he fielded a Hurricanes kick and charged straight back through the middle of the Hurricane’s defence and then offloaded to Chase Tiatia, who in turn found halfback Brad Weber to complete a wonderful counter-attacking try.

Given McKenzie’s influence at fly-half it will be interesting to see whether Chiefs coach Clayton McMillan opts to shift his star back into the No. 10 jersey in a more permanent capacity.

“He’s just a quality player,” McMillan said. “From the outside looking in, you know he’s always been a quality player for the Chiefs and the All Blacks, but it’s taken me to go into the environment to see how electric he is at training, how free spirited he is… he’s a dynamo and can create a lot out of nothing,” McMillan said.”

The Chiefs face the Blues back in Hamilton on Saturday.

BLUES LEARN THEY’RE NOT AT CRUSADERS’ LEVEL, YET

The game everyone had been waiting for finally rolled around on Sunday and despite optimism from Blues supporters and the neutrals, it ended in an all too predictable result: A comfortable Crusaders win.

The match report will show that the Blues were able to close to within five points early in the second half and were within striking distance of the Crusaders inside the final quarter, but also that they let themselves down with indiscipline.

You just about have to play the perfect game to beat the Crusaders, and the Blues will reflect on incidents like hooker Kurt Eklund’s wrestling-style suplex on Sevu Reece and prop Ofa Tu’ungafasi’s illegal cleanout as moments they simply cannot repeat if they’re to turn the tables later in the season.

Eklund’s tackle was particularly inexplicable given the Blues were set to be awarded a penalty themselves for Reece’s aerial challenge from the restart.

Eklund was then made to look even more like a fool when Richie M’ounga stood him up down the short side to score the try that ultimately ended any chance of a late Blues flurry.

Having scored a try early in the first half, it was real hero-turned-villain stuff for Eklund after his introduction off the bench.

Still, Blues coach Leon MacDonald believes his side are not too far away.

“I think most of the stats would be pretty equal. The discipline wasn’t, they were better than us.

“We’d been really good with discipline up to now and that’s the first game that we’ve got on the wrong side of the ledger around the discipline and that’s disappointing for us.

“But overall, there were a lot of areas in the game where we felt we were competing well…the scrums had good parity, we contested well around the tackle breakdown area, we were able to create space, there’s a lot to be happy and excited about. But we’ve got to be better than what we were, because ultimately the scoreboard reflects a dominant victory to them.

“So there’s enough for us to take away, to feel optimistic around how we’re tracking and how we’re playing and if we were beat up in a lot of those areas I’d feel differently, but I don’t think we were.”