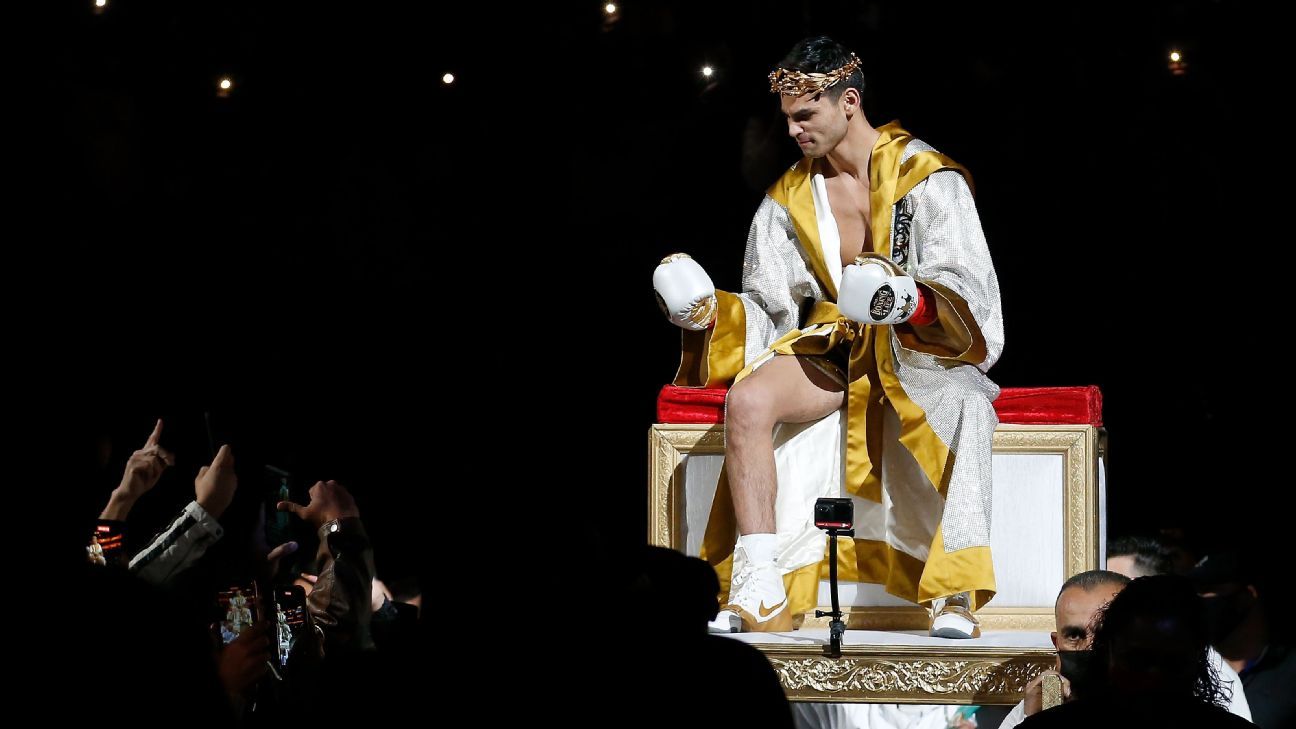 In the toughest test of Ortiz’s young career, he picked up an impressive sixth-round TKO victory over former junior welterweight titlist Maurice Hooker at Dickies Arena in Fort Worth, Dallas. Ortiz made his case for a potential welterweight title fight by the end of 2021. After the victory over Hooker, Ortiz showed he definitely has the skills to be taken seriously.

But the night’s biggest winner might have been Golden Boy Promotions as it tries to move into a post-Canelo Alvarez era. The two fighters left to carry Alvarez’s torch are Ortiz and budding lightweight star Ryan Garcia.

Ortiz has always had the talent, but he’s yet to come close to the mainstream appeal that Alvarez (or even Garcia) commands. That’s why Saturday’s performance was a grand arrival of sorts as he badly beat a respected welterweight contender.

It leaves Golden Boy with an intriguing question: is Ortiz or Garcia their best prospect? ESPN’s Cameron Wolfe and Ben Baby discuss the many layers of the situation and why the answer may not be as clear as one thinks.

Wolfe: First, we have to define what we mean by best prospect. Are we looking for the best long-term prizefighter or the fighter with the best chance to lead the pound-for-pound rankings? Garcia has the brightest star potential of any pro boxer, period.

But I tend to lean my prospect ratings on what they do in the ring. I still have many questions about Garcia. I have far fewer about Ortiz, who has already impressed me with his advanced boxing skill set and special knockout power. Both fighters are 22, so I’ll project five years down the line — I’d feel very comfortable predicting that Ortiz will be considered the better fighter and most prestigious champion.

Who you got, Ben? Betting your fortune on Ortiz or Garcia?

Baby: I tend to agree with you, but it’s more uncertain than it once was. Up until recently, Ortiz seemed far and away like the better pure fighter when comparing him with Garcia, who is certainly no slouch. But then Garcia knocked out Luke Campbell with a vicious body shot and showed that he is more than his social media following. Garcia, for all of his glamour and budding star power, can actually scrap a little bit.

It’s hard to gauge how good either one of those wins are. Hooker won the belt off of Terry Flanagan, an undefeated British fighter who had a series of decent wins. Garcia’s victory came against Campbell, who doesn’t have a big win but has faced the better opposition and is a much bigger name than Flanagan.

Garcia proved he has the speed, the power and the boxing acumen to be a legitimate champion and actually contend with the other fighters around his weight class like Gervonta Davis, Teofimo Lopez Jr. and Devin Haney.

What could significantly alter this equation is if Ortiz wins a title first. And if he beats, oh let’s say, Terence Crawford, who was ringside supporting his stablemate Hooker, how does that affect the dynamic?

Wolfe: Let’s go a little easy on him beating Crawford. Nobody has come close to beating Bud, but yes sign me up for that fight. Ortiz seems to be pursuing the belts and building a resume while Garcia seeks the money and following. I believe that separates them and their career paths.

Ortiz seems to have a more stable future with Golden Boy than Garcia, and Oscar De La Hoya’s friendly relationship with Top Rank opens up the door for a potential Crawford bout. Is Ortiz ready for Crawford? I don’t know. But that’s the sort of bet and bout that immediately catapults you on pound-for-pound lists if you win, like Lopez’s victory over Vasiliy Lomachenko.

Baby: And that’s the biggest question for both guys right now. At this point, are Garcia and Ortiz ready to face a champion? Given their recent victories, we know that all of the hype has been somewhat warranted. But given their stature as elite prospects, the only way we’ll know if the talk of their potential is fully validated is when they get a title fight.

Sure, there’s risk in putting top, young fighters against established champions too early. However, Teo changed everything when he beat Lomachenko. Not only did he show that the right kind of fighter can challenge one of the pound-for-pound best, but it also accelerated the timeline for the rest of the sport’s flourishing prospects if they want to contend with Lopez as the sport’s top young star one day.

Also, let’s not forget that Lopez could find himself against Garcia one day down the line in a superfight. It’s not far-fetched, either, to consider them moving up in weight to take on Ortiz one day, either.

Wolfe: Both are on the brink of being a champion, and it’s clear what each has to do to be an undeniable star fighter. Garcia has to prove his polish in the ring against top contenders enough to believe he can knock off Lopez, Tank Davis, Haney or Lomachenko. Ortiz has to do more to increase his draw and profile, because in this era, if a fighter doesn’t sell it’s hard for him to rise to the top of the sport.

Whoever closes the gap first will be the winner of this debate. It’s a good problem for Golden Boy to have in the years to come.