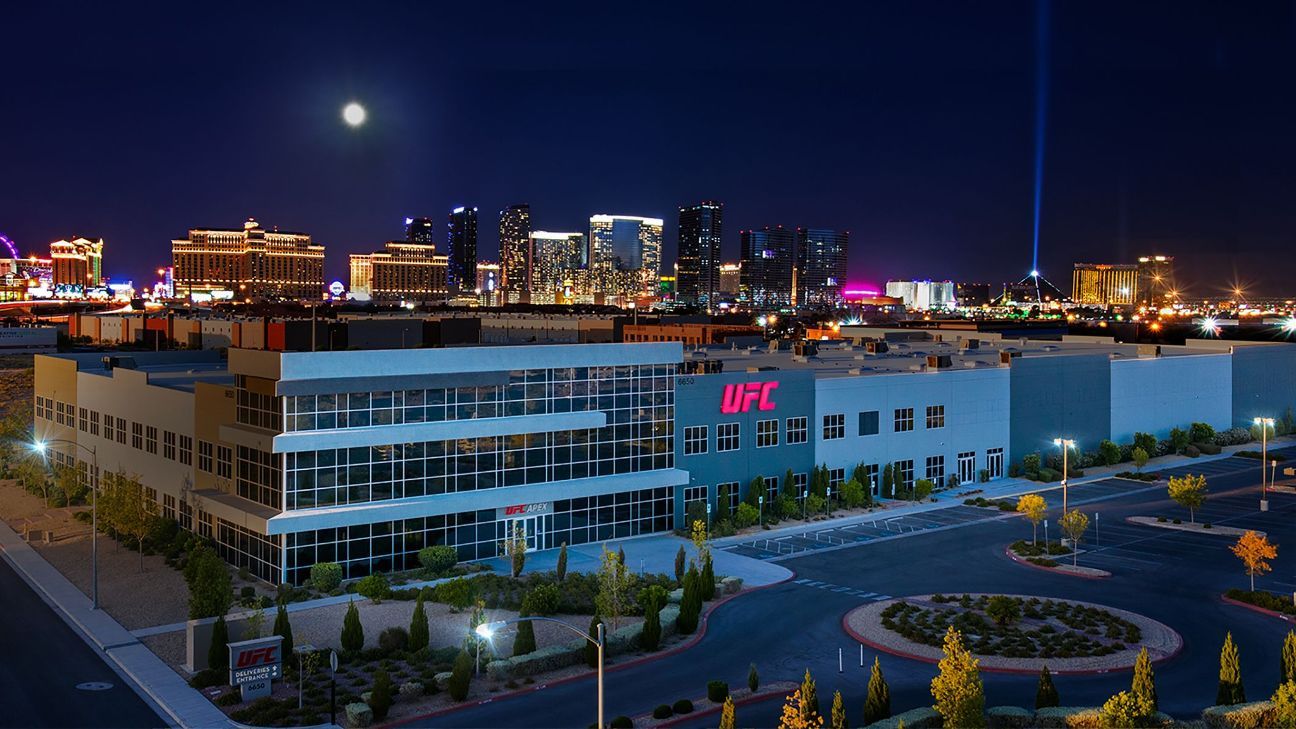 LAS VEGAS — It was early 2017, and UFC president Dana White was giving a tour of the promotion’s headquarters to Endeavor CEO Ari Emanuel, whose entertainment and media agency had recently purchased the UFC’s parent company, Zuffa.

While walking down a second-floor hallway, the Hollywood agent turned and looked out an east-facing window, toward a building and some adjacent land. Emanuel asked who owned it, and White said he wasn’t sure.

Emanuel said the UFC should purchase the large, warehouse-style facility, but the purpose wasn’t clear. UFC chief financial officer Andrew Schleimer looked into it, and the response from UFC executives was lukewarm, at best.

“I thought at the time, what are we gonna do with 130,000 square feet?” UFC executive vice president of operations and production Craig Borsari told ESPN. “This doesn’t make any sense.”

Four years later, the building — now known as the UFC Apex — ended up being a vital asset for the MMA promotion. The pandemic challenged all sports leagues and entities to devise creative ways to host events in a safe manner, and the Apex was a godsend for the UFC, even if some look forward to the days when the facility returns to a more peripheral role.

The Apex hasn’t been perfect. The atmosphere at the beginning, at least to one future Hall of Fame fighter, didn’t capture the magnitude of big fights. Not only was it a mostly empty venue, it was a more confined space, originally suited for smaller events — with a small crowd — such as Dana White Contender Series or The Ultimate Fighter. It even had a smaller Octagon. But the caliber of fighting didn’t disappoint. In fact, the smaller cage was credited for producing more action because there was less room for fighters to maneuver. The atmosphere even started to appeal to fighters, including one champion who said it had an “underground” vibe he enjoyed. The evolution of that nondescript land Emanuel saw in 2017 isn’t complete. Its days hosting pay-per-views might be numbered, but it has become far more important than just a live-event venue.

The focus of the MMA world returns to the Apex on Saturday when Stipe Miocic puts his heavyweight title on the line vs. Francis Ngannou in the main event of UFC 260. It’s possible this will be the last pay-per-view event at the site, considering UFC 261 is slated for Jacksonville, Florida, with a capacity crowd. With some states relaxing restrictions, the UFC could end up reserving pay-per-view events for filled arenas. Some of those events will take place on Yas Island in Abu Dhabi, United Arab Emirates, which has been the UFC’s international home during the pandemic, allowing foreign-based fighters an alternative when restrictions made travel to the U.S. too difficult. It received the majority of the attention last year due to the picturesque locale and “Fight Island” marketing, but White said the Apex has been every bit as important.

“The Apex is one of the smartest things we’ve done in 20 years,” White said. “Timing is everything in life, and this place was done just in time for a global pandemic.”

SCIENTIFIC GAMES CORPORATION owned the property — now the Apex — from 2015 until the UFC purchased it in October 2018. The building was Scientific Games’ global headquarters, as well as the site where it manufactured and repaired its casino gaming devices.The UFC purchased the property for about $40 million, according to the commercial real estate database CoStar. The plan was to use the facility to host Dana White’s Contender Series, and the UFC Apex debuted as a live venue with the third season of DWCS on June 18, 2019.

The season was a success, and UFC brass began to focus on ways to expand the building’s role. Borsari said the team mapped out a three-phase plan. The first phase — getting the Apex ready for Contender Series and a future season of The Ultimate Fighter — was complete. Next up would be a fully operational, self-sustaining broadcast operations center. And then a brand-new studio for ancillary programming.

But the pandemic changed everything, forcing the promotion into a two-month hiatus, beginning in March 2020. The UFC returned with new health protocols in place on May 9, but in Jacksonville. The Nevada State Athletic Commission (NSAC) had not yet approved live events.

After three successive cards in Jacksonville — and with Nevada signing off on the UFC’s COVID measures — the promotion prepared for the first UFC Fight Night at the Apex on May 30, 2020. Gilbert Burns won a unanimous decision over Tyron Woodley in the main event to earn a title shot against Kamaru Usman. The smaller cage used in the Apex was a hit with observers due to the action, and on that night six of the 11 bouts did not go the distance.

The UFC ran five straight weekends of events at the Apex until Fight Island’s debut on July 11.

“[The Apex has] been unbelievably beneficial, and we never in our wildest dreams thought we’d be producing this much content out of here this quickly,” Borsari said. “But the pandemic has forced us to look at ways we can be as safe as we possibly can. And truly, there’s no better place than this facility.”

THE UFC HAS invested $30 million in the Apex since its purchase, promotion officials told ESPN. The first card to air without the need for a production truck was Oct. 31, a UFC Fight Night featuring a main event between Anderson Silva and Uriah Hall.

When the UFC does get back on a regular road schedule, the company will be able to produce events at the Apex no matter where the fights are being held. The broadcast operations center includes separate control rooms for Spanish and Portuguese broadcasts.

Without the Apex, UFC vice president of event production Tim O’Toole said the promotion might have done what Top Rank boxing did during the pandemic: rent out the MGM Grand ballroom as a bubble for events.

“It’s obviously a big investment and we’re paying it off, and paying it off faster than we anticipated initially.”

Since May 2020, the Apex has been the domestic home of the UFC’s “bubble,” hosting 28 events, including some of the biggest fights in promotion history. Only the MGM Grand and Mandalay Bay, both in Las Vegas, have hosted more events in the UFC’s history, at 42 and 31, respectively.

“When the Apex first started holding fights, it was hard to feel the excitement, because it’s such a confined space that you didn’t feel a big fight week. … Now, it’s changed, because it’s become a major factor in the fights. I love the environment, I love the fights, I love the Octagon size.”

The UFC declined to comment on how much running an event at the Apex costs compared to an average prepandemic event at an arena.

Borsari said that even after the pandemic, it’s likely the UFC will hold some events at the Apex with 800 to 1,000 ticketed fans in attendance.

One of the key elements of the Apex was having an extension of the UFC Performance Institute, which is a separate, adjacent 30,000 square foot facility housed inside the original UFC HQ that’s dedicated to training, technology and nutrition for fighters. The Apex extension houses a boxing ring, large mat space for grappling, weights and a long turf track ideal for pushing weighted sleds.

This workout room has been crucial because so many visiting fighters are in Las Vegas during fight weeks, on top of a sizeable group that already lives in the city and trains at the PI regularly. In some cases, the UFC has had to split the access of opposing fighters to avoid conflict. The red corner fighter will be able to train with his or her team at the Performance Institute and the blue corner fighter will be stationed at the Apex.

THERE’S ONE THING the Apex hasn’t been able to provide, and it’s the same element missing from all sporting events since last spring. Not having capacity crowds changed the dynamic of consuming sports, and the size of the Apex magnified that experience.

“When the Apex first started holding fights, it was hard to feel the excitement, because it’s such a confined space that you didn’t feel a big fight week,” said Daniel Cormier, who works at the Apex as a commentator and fought there last August, losing his trilogy bout to Miocic for the heavyweight championship. “They all kind of felt the same.

“Now, it’s changed, because it’s become a major factor in the fights. Now, the Apex feels like we’re fighting at T-Mobile [Arena] or at MGM. I love the environment, I love the fights, I love the Octagon size.”

Middleweight champion Israel Adesanya is someone who plays to the crowd as much any fighter on the UFC’s roster. He choreographed an elaborate walkout before fighting Robert Whittaker in front of a UFC-record crowd of 57,127 in Australia on Oct. 6, 2019, but when he fought at the Apex on March 6, he was low-keyed as he walked to the Octagon to face Jan Blachowicz. But Adesanya’s approach did not reflect a lack of excitement for the crowdless environment.

“It felt like a death match being streamed to the rest of the world,” Adesanya said. “Like some crazy s—. That’s what Fight Island felt like, as well…. I like that s—. I love this life.”

UFC lead play-by-play announcer Jon Anik said calling fights at the Apex makes his life a bit easier. It’s not a difficult facility to navigate, compared to a huge venue. And he joked that the bathroom is much closer. While he admits that he looks forward “to getting back to the big arenas,” he recognizes how instrumental the Apex has been to the UFC during the pandemic.

“I’m just so thankful we have the staff we do and the facility, because we’d be scrambling trying to figure out where to put these things,” Anik said.

After the pandemic, the Apex will remain the host of Contender Series and the return of The Ultimate Fighter this summer. It’s likely there will still be some Fight Night broadcasts originating from there.

“Shows you what a visionary I am,” joked Borsari, who initially didn’t understand Emanuel’s desire to buy the property. “It turned out to be an absolute home run move, even without the pandemic. The fact that we’re in the pandemic, we’re very, very fortunate to have it.”