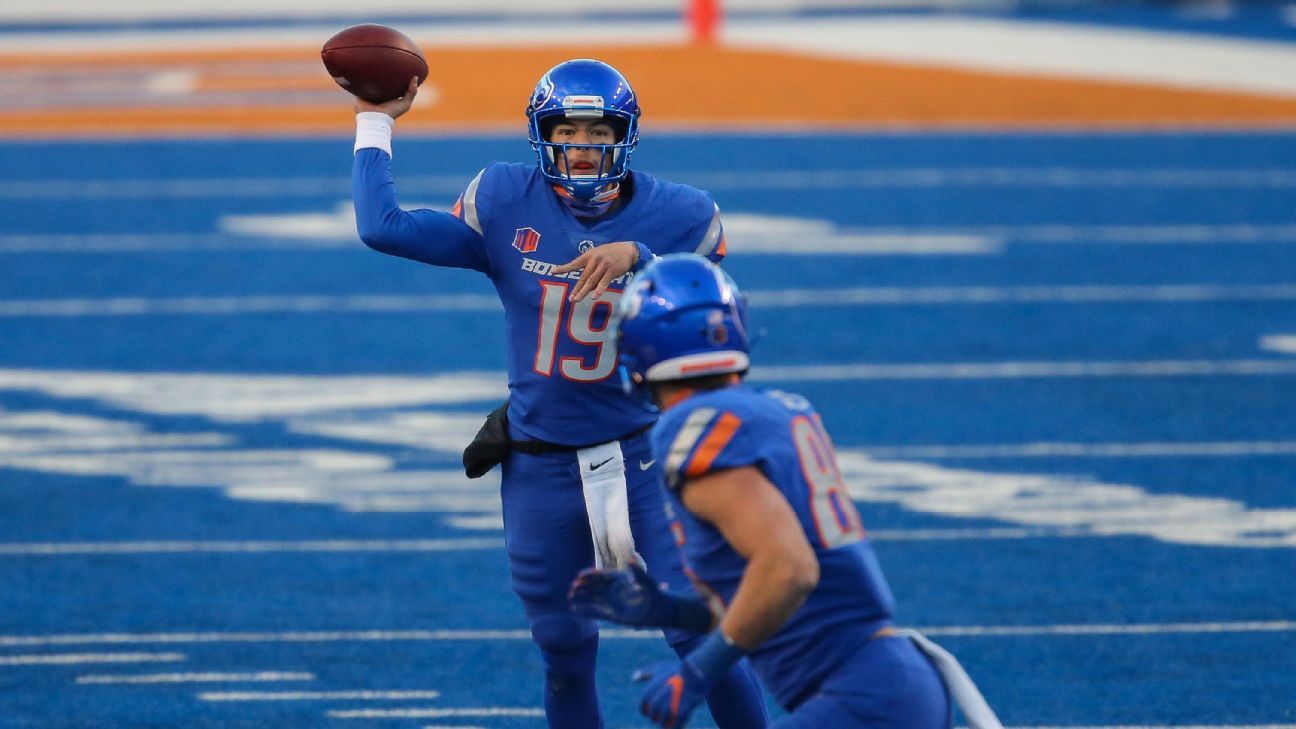 On paper, the MWC Mountain football race should play out as it has in recent years: with Boise State the victor. The Broncos have won four titles in a row and five of the past seven, and SP+ projects them far ahead of the field.

There’s been just enough change to make you wonder, though. BSU is making a coaching change for just the second time in 15 years, and the two teams projected next best — Craig Bohl’s Wyoming and Troy Calhoun’s Air Force — have quite a bit more than usual to offer from an experience standpoint. Can the Pokes and Falcons take a run at the champs? And can new head coaches elsewhere in the division make an early stir?

Every week through the summer, Bill Connelly will preview another division from the Group of 5 and Power 5 exclusively for ESPN+, ultimately including all 130 FBS teams. The previews will include 2020 breakdowns, 2021 previews and a brief history of each team in one handy chart. The series has thus far covered the Conference USA East and West, as well as the MAC East and West.

Longtime Rocky Long assistant Danny Gonzales brought the 3-3-5 defense back to Albuquerque — and brought Long back to run it! — and after an 0-5 start the Lobos won their last two games of 2020.

* Likely wins are games in which SP+ projects the scoring margin to be greater than seven points, or above about 65% win probability. Likely losses are the opposite, and relative tossups are all the games in between.

The Lobos can still run. Offensive coordinator Derek Warehime inherited the bones of Bob Davie’s old run-heavy offense and made the most of it. The line blocked well, and UNM ranked a solid 47th in rushing success rate behind the work of running back Bobby Cole and a grab bag of QBs. Including sacks as pass attempts, Trae Hall, Tevaka Tuioti and Isaiah Chavez combined to rush for 7.1 yards per carry … but only 5.4 yards per pass attempt.

Hall, four line starters and every QB are scheduled to return, which is good, but can the passing game improve? Chavez and Tuioti (injured for the spring) were more effective than Hall, but the receiving corps only helped so much.

Whether the 3-3-5 will take hold this time. New Mexico hasn’t ranked better than 99th in defensive SP+ since 2008, Long’s last year as HC, and his return as defensive coordinator prompted no immediate improvement. They ranked 122nd and got consistently gashed by big pass plays. Safeties Jerrick Reed II and Patrick Peek combined for three TFLs, five interceptions and seven pass breakups, but they were all-or-nothing and the corners struggled. A dreadful pass rush — 10th in blitzes per dropback but 102nd in pressure rate — didn’t help. Eight starters are back, but a talent upgrade is needed.

New Mexico’s history in one chart

The second Gary Andersen tenure in Logan bombed — he bailed three games into a 1-5 season. Now, former Arkansas State head coach Blake Anderson gets to clean up the mess.

The schedule features four opponents projected lower than USU and three more projected below 90th. If a truckload of transfers delivers, a solid season is conceivable.

What the floor looks like. After 13 consecutive losing seasons, the Aggies broke through under Andersen in 2011, bowled for eight of nine years and twice finished ranked in the AP poll. They continued to win after Andersen left for Wisconsin, but when successor Matt Wells departed after a brilliant 2018, they brought Andersen back despite shaky tenures at Wisconsin and Oregon State.

Andersen showed us that this program had an awfully high ceiling, but last year we learned that the floor is still really low. In 2018, the Aggies ranked 22nd in offensive SP+ and 35th on defense. In 2020: 111th and 115th, respectively. USU still rushed the passer well — especially linebacker AJ Vongphachanh — but rarely got the chance because opponents were never off-schedule. There’s talent in the linebacking corps and secondary, but there’s plenty of room for newcomers on the two-deep.

Well, we certainly didn’t learn much about the 2021 depth chart. Arkansas State transfers Logan Bonner (quarterback), Brandon Bowling (slot receiver) and Justin Rice (linebacker) could all start from day one, and Anderson brought in six power conference transfers as well.

Anderson did his best to give the talent level an immediate boost, and there might be just enough inherited talent, too — RB Devonta’e Henry-Cole, center Demytrick Ali’ifua, linebackers Vongphachanh and Nick Heninger, safety Shaq Bond, corner Cam Lampkin — to field a much improved team. But it’s a long road back to 2018.

Utah State’s history in one chart

CSU plays five opponents projected 105th or worse in SP+, so there’s potential for a decent year. But that will require a pass defense and some semblance of offensive consistency.

Leading passer Patrick O’Brien transferred, presumably leaving the job to either Todd Centeio or Justice McCoy. McBride and Wright return, along with basically all of the run personnel, but that doesn’t guarantee run consistency. New offensive coordinator and longtime former Wisconsin assistant Jon Budmayr will likely attempt to double down on the physical play. We’ll see if it sticks.

Scott Patchan and Manny Jones are outstanding. Chuck Heater’s defense ranked 15th in run stuff rate and second in sack rate, and the primary reasons for that — Patchan, Jones and linebacker Dequan Jackson — all return. Patchan logged 5.5 sacks and forced eight incompletions (in four games!) after transferring from Miami, and Jones has 12 TFLs in his last seven games going back to 2019.

Whether they’ll be able to defend the pass, too. CSU ranked 76th in passing success rate allowed despite the great pass rush. Heater asked corners Rashad Ajayi and Marshaun Cameron to play lots of man coverage, and it was hit-and-miss. They’re back, and Temple transfer Linwood Crump comes aboard; does the balance between aggressiveness and consistency look a little better this year?

Colorado State’s history in one chart

Air Force lost even more production than usual thanks to “turnbacks” (the military version of opt-outs, basically). But it went 3-3 and nearly won the Commander-In-Chief’s Trophy anyway.

The Falcons are projected favorites in each of their first five games, but only once thereafter. However, if a rebuilt offensive line gels, almost no game is unwinnable.

What we learned about Air Force in 2020

Returning production only means so much. With no redshirts to work with, head coach Troy Calhoun is used to dealing with turnover. Last year’s turnover was a lot, though. The Falcons lost every experienced QB, most top skill corps players, two all-conference offensive linemen and their top two defensive linemen, three linebackers and seven defensive backs.

Despite that, they still ranked fifth in FBS in offensive success rate and allowed only 1.7 gains of 20+ yards per game (first). They did typical Air Force things very well and improved as the year went on. They’d have probably finished much higher than 80th in SP+ with a full 12-game slate.

In 2021, quarterback Haaziq Daniels is back, along with his top two backs and explosive tight end Kyle Patterson (17.1 yards per catch). The defense returns five 2020 starters, plus four 2019 starters who had “turnback” seasons, including dynamite linebacker Demonte Meeks.

There’s only one unit dealing with major turnover, but it’s a pretty important one.

What we didn’t learn about Air Force in 2020

Whether the offensive line can meet last year’s standard. Air Force runners got stopped at or behind the line only 9% of the time last year, lowest in FBS. All five starters earned at least third-team all-conference honors from Pro Football Focus. Two were first-teamers.

All six linemen with more than 101 snaps are gone. The backups looked fine, but in a small sample. Air Force deals with line turnover constantly, but last year’s unit set a particularly high bar.

Air Force’s history in one chart

Craig Bohl’s last four Wyoming teams have all ranked 41st or better in defensive SP+ and 95th or worse in offensive SP+. A brief 2-4 campaign in 2020 continued that trend.

SP+ loves Wyoming’s chances for a big season against a light schedule. If a new coordinator can perk up the offense, a division title run is in play.

The offense might have promise? Wyoming lost starting quarterback Sean Chambers to a season-ending injury for the third year in a row, but averaged 34 points through the first four games until freshman Levi Williams began dealing with a shoulder injury. He completed just seven of 25 passes in his last two games, and Wyoming lost by scores of 17-16 and 17-9.

With healthy QBs and new offensive coordinator Tim Polasek, it’s not hard to predict improvement. Backs Xazavian Valladay and Trey Smith are solid, and the line is loaded with experience. The receiving corps desperately needs consistency, but it has explosiveness in wideouts Ayden Eberhardt and Isaiah Neyor (500 yards, 20.8 per catch).

Anything that would make us worry about the defense. After an out-of-character opener against Nevada, the Pokes rounded into form, allowing 16 points per game and 4.6 yards per play. They allowed neither efficiency (sixth in three-and-out percentage allowed) nor explosiveness (27th in explosive play rate), and they dominated in the red zone (eighth in goal-to-go TD rate).

The Cowboys achieved this level despite losing four linemen, including ace pass rusher Solomon Byrd, to opt-outs. Now all 11 starters return — including havoc-heavy linebacker Chad Muma and a great corner tandem in Azizi Hearn and C.J. Coldon — as do the four linemen. Good luck with that, MWC offensive coordinators.

Wyoming’s history in one chart

Boise State was mostly Boise State in 2020, but some big-play issues (for and against) cost the Broncos in a 5-2 campaign. Then head coach Bryan Harsin left for Auburn.

Former BSU defensive coordinator (and linebacker) Andy Avalos replaces Harsin, and there’s not a single guaranteed loss on the schedule.

The components remain mostly in place. Blue-chip quarterback Hank Bachmeier produced a 94.2 QBR against man coverage last year and, when healthy, has lived up to some of his recruiting hype. Receiver Khalil Shakir averaged 3.3 yards per route run, ninth among FBS players with at least 200 routes. Linebacker Riley Whimpey had nine TFLs and 11 run stuffs in seven games. Kekaula Kaniho combined nine breakups with a 30% pressure rate from the nickel position.

The star power is high for by far the best recruiting team in the MWC. SP+ projects the Broncos more than 40 spots ahead of anyone else in the division. And while a coaching change is an opportunity for shakeup in either approach or culture, this is only so much of a change — Avalos was Harsin’s defensive coordinator until 2019 and knows the BSU program as well as almost anyone on the planet. He also built his own track record of success at both BSU and Oregon.

Whether Bachmeier can ever remain healthy for a full season. It’s unfair, but he’s missed eight of 21 games in two seasons, which has stunted his development a bit.

Why big plays suddenly went against BSU. Despite the threat of Shakir and slot man CT Thomas, the Broncos still averaged only 3.3 gains of 20+ yards per game (113th in FBS), while the defense allowed 5.0 (74th). The Broncos won the efficiency battle most of the time, but big plays flip games. Can a glitchy secondary smooth out the errors, especially without top cornerback Jalen Walker?

What Avalos might change. He retained assistant Spencer Danielson to run the defense, but he brought in UC Davis’ Tim Plough to run the offense. Plough preaches tempo and aggression, but can he coax out more big plays without sacrificing efficiency?

Boise State’s history in one chart