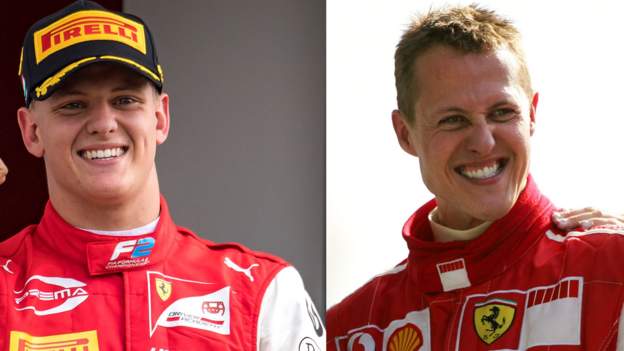 Mick Schumacher starts his Formula 1 career this weekend in Bahrain as a rookie like no other.

As the son of the man who until last year was the most successful grand prix driver of all time, the 22-year-old’s path to the top of the sport has long seemed pre-ordained.

And as Michael Schumacher’s son, Mick will have the eyes of the world on him this year like perhaps no other debutant in F1 ever has before.

But if that adds weight as he embarks on the most difficult challenge of his life, you would not know it.

Asked how he handles carrying the legacy of his father back into F1, he tells BBC Sport: “It is motivation and pride. I am happy to be here; I am happy to have brought back the Schumacher name into F1.

“I have done it with championships on my back so we have proven I am able to drive a race car. So I don’t feel a blink of pressure from it.”

Right now, Schumacher has the wide-eyed optimism one might expect from a young man who has achieved what he describes as “a lifelong dream” and is about to embark on a journey full of possibilities. Even the little things are filling him with joy.

“It’s an amazing feeling being with the team and knowing this is it and I’m getting close to my first race in F1,” he says. “I got my pass – you know, the proper red F1 pass – and I was like, ‘Woah!’

“I remember seeing my dad having one and I was always, like, I wanted one, but obviously I didn’t get one. I have one now and it’s amazing and I am really looking forward to it.”

For those who knew or followed his father, watching Mick start out on his journey can be a slightly unnerving experience.

The physical similarities between them are strong. Facially, Mick is a mix of his father and mother, Corinna. But he walks like Michael, often holds his head like him, and has a way of holding himself and manner of expression that is very reminiscent of him.

And the similarities go beyond even that. Mick is the same age now as Michael was when he made his debut at the 1991 Belgian Grand Prix in a Jordan.

In a giant’s footsteps

The fact Schumacher embraces the legacy of his father and sees himself continuing a family journey is underlined by the fact that he asked F1 to alter its usual practice of using the first three letters of a driver’s surname as his shorthand on the timing screens.

While Lewis Hamilton is ‘HAM’, Fernando Alonso ‘ALO’ and so on, Michael was ‘MSC’ because at the time there were two Schumachers in F1, along with brother Ralf.

That’s not the case anymore, but Mick decided he’d rather continue his dad’s legacy than be ‘SCH’.

“It’s quite emotional for me to see ‘MSC’ on the timing screen again,” he said during pre-season testing. “It’s a special bond I have to it, and I hope it’s nice for everybody to see it there.”

Mick describes his father as his idol, and he decided he wanted to follow in his footsteps from a very early age – or “right at the beginning,” as he puts it.

He started karting at the age of nine in 2008. “Obviously at the beginning you don’t understand what it takes,” he says. “As I grew older and grew in the categories, I understood how much sacrifice it takes. It was when I was around 12, 13 years old when I understood I really wanted to do this on a professional level.”

Since then, there has been steady progress up the motorsport ladder, all carefully overseen by Sabine Kehm, who was Michael’s manager before she became Mick’s.

Kehm was always extremely aware of the attention that would be on Schumacher as his father’s son, and concerned to expose him to the media and public only in a carefully managed way. That situation only became more intense following the skiing accident in December 2013 that left Michael with serious head injuries.

Michael has not been seen in public since, and it is made very clear to everyone who encounters Mick that this subject area is off limits. Michael was a private man when he was racing, and that is the way they want it to stay now.

The road to F1

With that name, it was always assumed Mick would make it into F1, and that became even more likely when, having won the European Formula 3 title in 2018, he joined the Ferrari Driver Academy.

After a learning year in Formula 2 in 2019, Schumacher did what was expected of him last season and clinched the title. For his F1 debut, Ferrari chose to pay for a seat at the US-based Haas team, which has strong affiliations with Maranello.

Ferrari, the team with whom Michael achieved most of his successes, have said their intention is for Mick eventually to race one of their cars. But he has to earn it, prove he is worthy of it, and there is some way to go before that happens.

Mick’s job for now is to learn his trade and prove he has what it takes to succeed at the very highest level. Then, Ferrari can decide whether he has done enough to merit promotion to their team alongside Charles Leclerc, who is with the team until 2024 and for the next two seasons at least is partnered with Spaniard Carlos Sainz.

Michael was an instant sensation when he burst on to the scene three decades ago with the Jordan team. He out-qualified his experienced team-mate Andrea de Cesaris by more than 0.7 seconds and lined up seventh on the grid, only for his clutch to fail at the start.

It will be harder for Mick to do the same, just because of the team he is racing for. Haas finished ninth of 10 teams last year, and were often slowest of all. They have admitted that not only is this year’s car only very slightly updated, but that it will not be developed during the year as they focus on the major regulation change that is coming in 2022.

Schumacher will likely be racing at the back. His task is to out-pace his team-mate – another rookie, the Russian Nikita Mazepin – and impress where he can.

If this sounds tough, it is do-able. If a driver has that special something, it is obvious wherever he is on the grid – as Alonso proved when he made his debut for back markers Minardi in 2001, or Leclerc at Alfa Romeo in 2018.

Schumacher says a successful season from his point of view would mean “an improvement from the beginning to the end of the year – that we as a team are able to be consistently further in front than we were last year and I am pretty sure we have all the possibilities to do that.

“We have two drivers who are very hungry, a team behind us that is very motivated and a good bunch of people able to do a very good job and we need to use the opportunities and just push, really.”