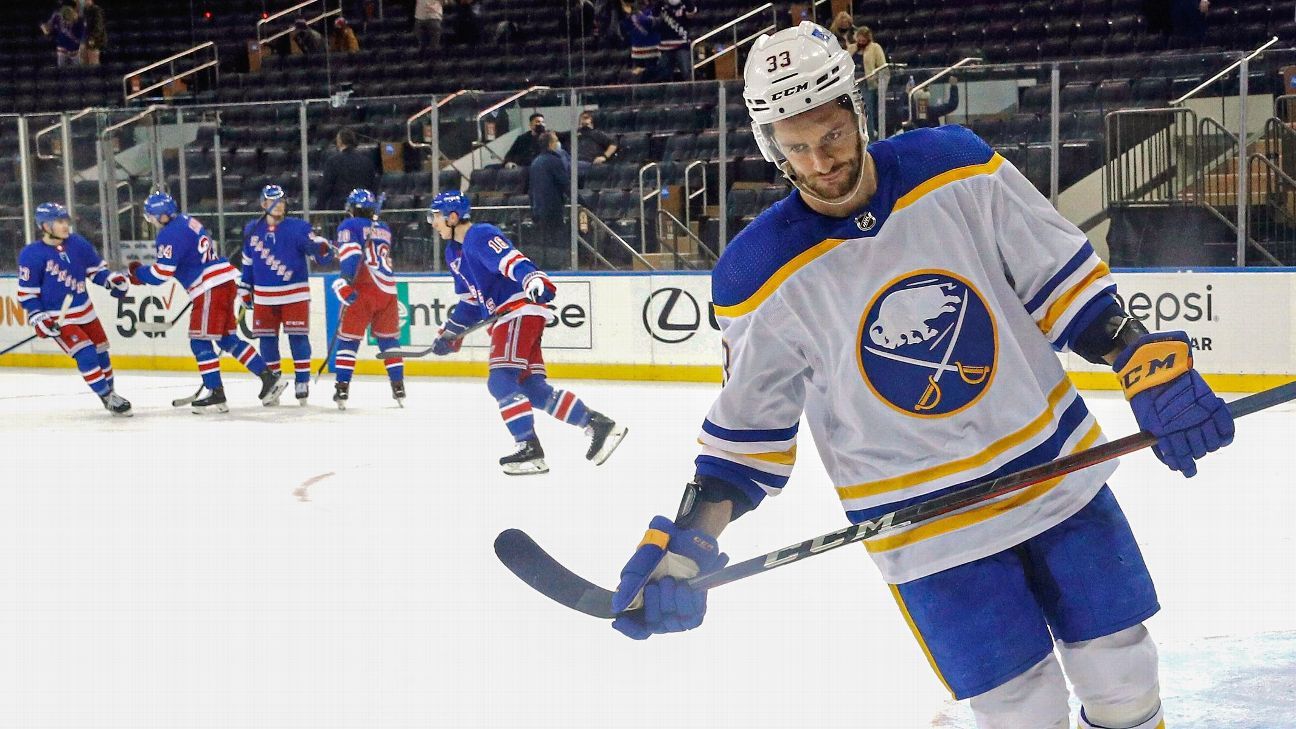 NEW YORK — Rasmus Asplund, Dylan Cozens and Jeff Skinner scored for Buffalo, on a rare night where the Sabres showed some offensive skill, but it wasn’t enough in a 5-3 loss to the New York Rangers Monday.

New York’s Keith Kinkaid, who began the season in the AHL, became yet another goalie to stop the Sabres, making 16 saves in his second consecutive start for the Rangers.

The Sabres went 0 for 2 with an anemic power play unit, falling to 0 for 21 over their last 13 games, a major reason for the skid. They will look to end this run on Wednesday, when they take on the Penguins in Pittsburgh.

Meanwhile, the Rangers, like most teams have done in the NHL’s East Division this season, took advantage of Buffalo’s woes. Chris Kreider scored twice, including the tiebreaking goal in the third period, to pace the home team.

Kaapo Kakko, the No. 2 overall pick in the NHL draft in 2019, also scored twice and Adam Fox had a goal and two assists as the Rangers won for the fourth time in six games (4-1-1) by beating the Sabres for the 10th time in the last 13 meetings. Artemi Panarin had three assists and Ryan Strome added two.

Carter Hutton started and made two saves for Buffalo before leaving 2:51 into the game after the Rangers’ Julien Gauthier slid hard into him while being pushed by Sabres defenseman Rasmus Ristolainen. Dustin Tokarski, called up from the taxi squad earlier in the day, came on and finished with 33 saves.

With the Sabres trailing 3-1 after two periods, Cozens — back after missing four games with an injury _ pulled them within one as he took a pass from Sam Reinnhart and beat Kinkaid at 1:09 of the third.

Skinner tied it at 4:22 on a breakaway after a turnover by the Rangers as he skated up the middle of the ice and fired into the top left corner for his third.

Kreider put New York back ahead just 1:25 later with his second power-play goal of the night as he batted the rebound of Strome’s shot out of the air and past Tokarski for his 16th.

The Sabres pulled Tokarski for an extra skater with about 1:20 left, and Kakko added an empty-netter with 57.7 seconds left for his second of the night and fourth of the season to seal the win.

The Sabres came out aggressive in the second period, and Skinner had two chances early. On the first, he had a breakaway but Kinkaid made a sprawling save of his backhand try, knocking the puck up and off the crossbar. Less than 30 seconds later, Skinner had another chance on the right side but Kinkaid made another sprawling glove save.

Jacob Trouba then hit a post for the Rangers about 90 seconds into the period.

Asplund gave the Sabres a 1-0 lead at 3:52. Standing on the left side of the net when Riley Sheahan sent the puck from behind the cage toward him, Asplund knocked it down with his skate and quickly put it in while Kinkaid was looking for it on the other side. It was Asplund’s second goal in six games this season.

Kakko tied it at 7:13. After a faceoff to Tokarski’s left, Panarin brought the puck around the back of the net and sent a pass in front to Kakko. Tokarski made a pad save on his first try, but Kakko knocked in the rebound.

The Rangers had a 5-on-3 advantage for 19 seconds on overlapping penalties to Sabres defensemen Rasmus Dahlin and Jacob Bryson. Seconds before the first penalty expired, Kreider deflected a pass from Panarin up into the top right corner with 9:21 left in the second.

Fox, playing in his 100th NHL game, made it 3-1 with 1:42 remaining on a Rangers rush as he knocked in the rebound of a shot by Mika Zibanajad for his third.