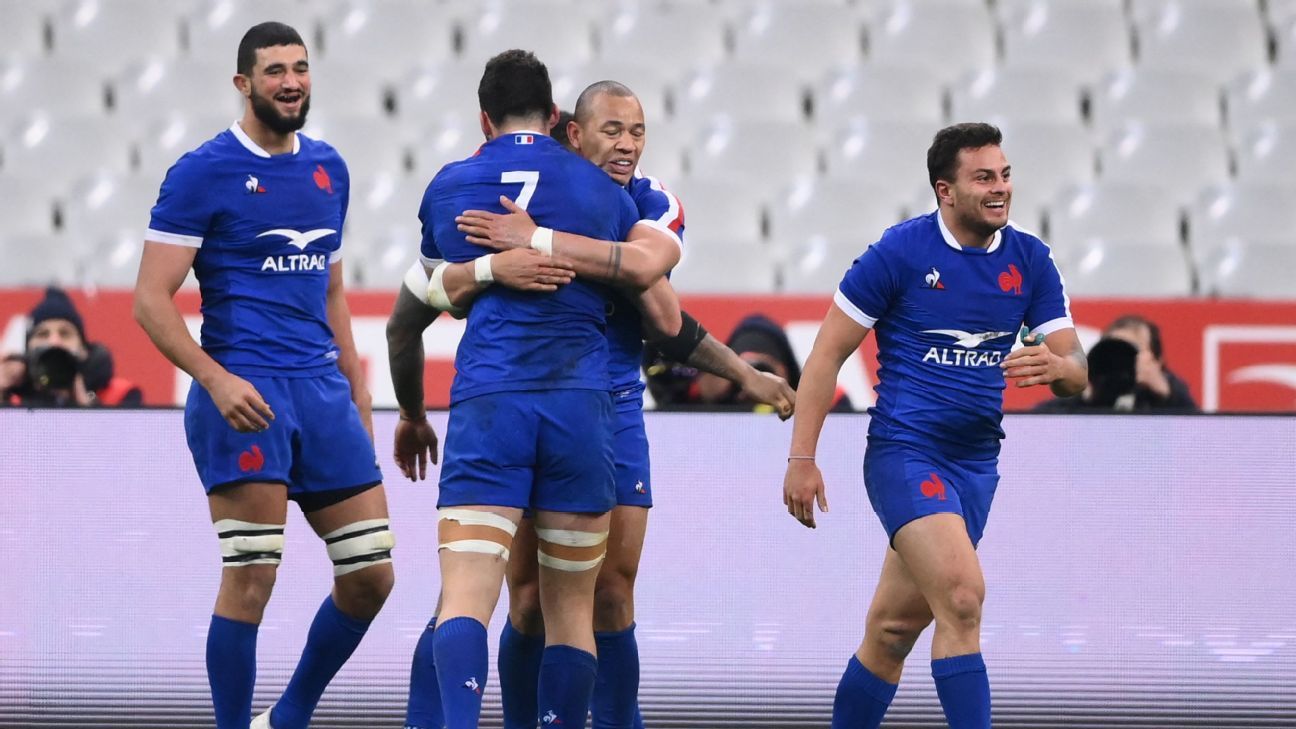 France coach Fabien Galthie will ring the changes and turn on the power against Scotland on Friday, when his team will bid for their first Six Nations title since 2010.

Galthie has made five changes to the side that beat Wales last weekend, with Arthur Vincent coming in at centre and Gael Fickou moving to the wing, consigning Teddy Thomas to the bench.

“We needed more density on the flanks,” Galthie said on Wednesday to explain Fickou’s re-positioning at the expense of Thomas. “Scotland have very athletic players on the wings.”

Scrum-half Antoine Dupont’s usual partner at Toulouse, where both play their club rugby, Ntamack came on from the bench in Saturday’s dramatic 32-30 victory against Wales.

“He was very solid in a weird game. He led the team, took the good decisions and I’m sure he’s going to do just that again,” Galthie said.

France beat Wales in stoppage time and they must beat Scotland by 21 points and secure a bonus point to pip Wales to the title.

Locks Bernard Le Roux and Swan Rebbadj take the places of Romain Taofifenua and suspended Paul Willemse, and flanker Anthony Jelonch’s power game earns him a start with Dylan Cretin on the bench.

France, who beat Wales in stoppage time, must beat Scotland by 21 points and secure a bonus point to win their first title since 2010.

Les Bleus currently lie third in the table with 15 points, behind Wales with 20 and Ireland on 15. Scotland are fourth on 11 points, with a chance of finishing second, which would be their best result since the addition of Italy turned the Five Nations into Six in 2000.

Meanwhile Mercurial fly-half Finn Russell will return to the Scotland team in one of four changes made by coach Gregor Townsend on Wednesday.

Russell, who plays his club rugby in France, missed the runaway 52-10 win over Italy at Murrayfield last weekend because of concussion but his presence at stand-off will come as a boost to Scottish hopes of an upset triumph at the Stade de France.

Ali Price returns at scrum-half to partner Russell, while Chris Harris is back at centre and George Turner at hooker.

Price replaces Scott Steele, Harris comes in for Huw Jones and Turner for David Cherry, despite the latter scoring two tries in his first start against the Italians. All three were named among the replacements.

Captain Stuart Hogg moves to his more familiar role at full-back having played at stand-off in the record win over Italy, replacing Sean Maitland, who was not selected for the trip because of a restriction on the number of English-based players that Scotland could pick for the re-arranged game, which falls outside of the window for international rugby.

“The match against France provides us with an opportunity to finish the Six Nations in our highest position in its history,” Townsend said.

“Both teams have needed to manage a short six-day turnaround and we have used this week to regroup and focus on putting in our best performance of the competition so far, which we will need to deliver if we are to leave Paris with a victory.”