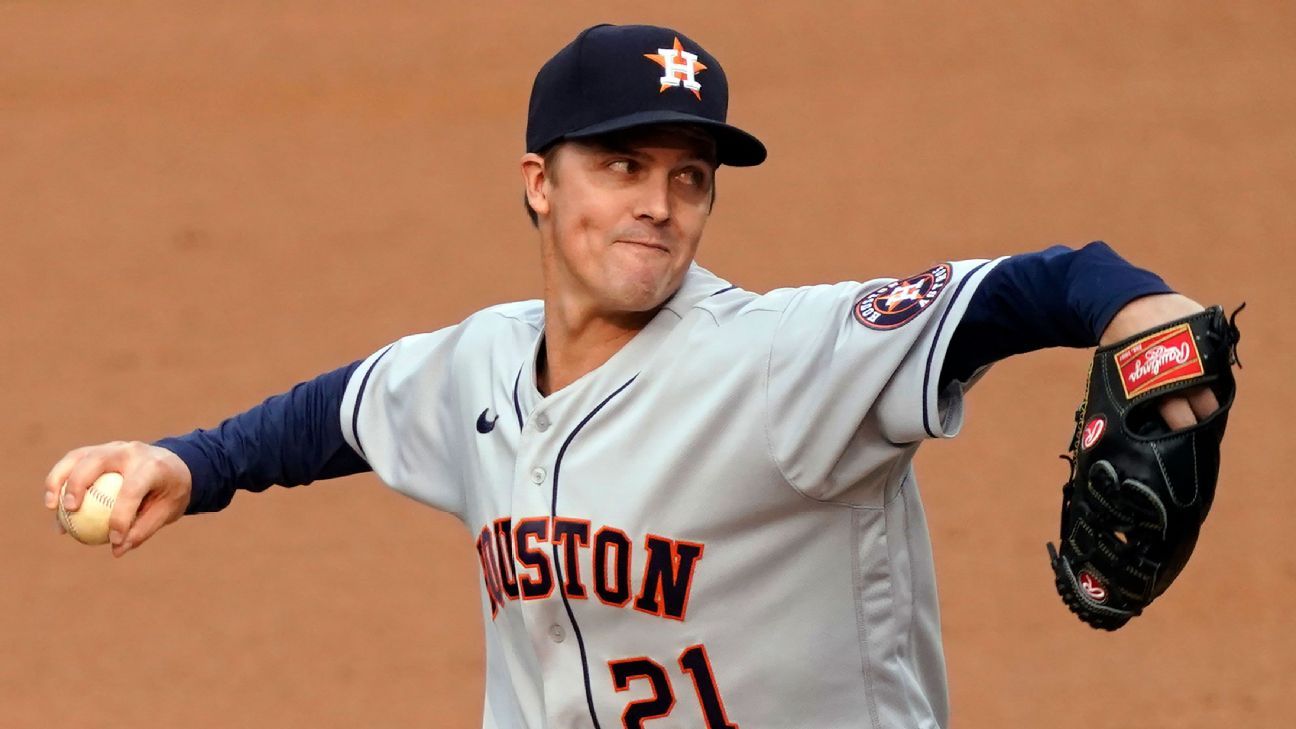 Over the past three days, we have revealed our MLB Rank list of the top 100 players in baseball for the 2021 season.

Now that the full ranking has been unveiled, it’s time for the real fun to begin — debating who is too high, too low and who should have the biggest gripes about not making the top 100 at all. Starting with Mike Trout and Mookie Betts at the top and continuing right through current stars who just missed the cut, there is plenty to discuss this year, so we asked ESPN MLB experts Bradford Doolittle, Buster Olney and David Schoenfield to weigh in on what caught their attention.

Olney: That one team — the Dodgers — could have so many players among the elite of the sport. L.A. has an incredible five among the top 25, from Mookie Betts at No. 2 to Corey Seager at No. 22, and Clayton Kershaw and other really good Dodgers are not among those five. No wonder the Dodgers are a threat to win two-thirds — or more — of their games.

Doolittle: As always, these ratings are meant to be forward-looking and reflect the value we think players will generate during the coming season. Still, track records remain our best evidence for trying to figure out what’s going to happen and there are a lot of young players in the top 100 whose proofs of concept are still a little short. Some of these are obvious picks, such as Juan Soto and Ronald Acuna Jr. and Fernando Tatis Jr., who have already put up star-level numbers. But some of this group required some projection on the part of the voters, such as Bo Bichette at No. 41, Luis Robert at No. 52 and Vladimir Guerrero Jr. at No. 55. We are anticipating those elite talents are going to approach their potential this season, and if we’re right, that means baseball’s impressive collection of young, elite talent will continue to grow.

Schoenfield: Call it a pleasant surprise — only two relievers cracked the top 100 (Milwaukee’s Josh Hader and Devin Williams), down from four in 2020 and nine in 2019. This is a reflection on the current shaky state of closers as well as the decline of the once-dominant group from the mid-to-late 2010s (Craig Kimbrel, Kenley Jansen, Aroldis Chapman, Wade Davis) and the inability of others such as Edwin Diaz and Blake Treinen to retain year-to-year consistency. In the past, we’ve overrated relievers — nine in the top 100 are way too many — so this adjustment feels right.

Who is the most over-ranked player on our list?

Olney: Trevor Bauer‘s outstanding 2020 season earned him the biggest salary for any player in any season — it’s well earned, but I am surprised that he’s already at No. 16 on this list. With another elite season, perhaps, but to see him above the likes of DJ LeMahieu is unexpected. The fact that no team jumped in with an overwhelming six- or seven-year offer tells you that front offices feel Bauer has more to prove — and maybe Bauer feels that, as well, given the opt-outs built into his contract.

Doolittle: I love Tyler Glasnow‘s chances of becoming an elite ace, but he just doesn’t have the volume of quality work on his resume to be ranked as a top-40 player. I know we’re looking ahead, but this is a 27-year-old pitcher who has never started more than 13 games in a season. Let’s let him actually do it over a full campaign before we start putting him within seven spots of Clayton Kershaw.

Schoenfield: Sorry, I’m going to have to double down on Glasnow, as he’s clearly the guy who jumps out for the reasons Brad stated. We’ve seen flashes of brilliance from him, especially his abbreviated 2019 run, and his strikeout rate in 2020 was ridiculous, but he struggled in the postseason, and until he performs over a full season, he shouldn’t be ranked ahead of other starting pitchers such as Luis Castillo, Hyun-Jin Ryu and Aaron Nola.

Who is the most under-ranked player on our list?

Olney: Jacob deGrom. I get the feeling that based on how dominant he is, with his fastball velocity now reaching 102 mph, if 30 GMs held a fantasy draft to attempt to win a World Series this year, he’d go higher than No. 6.

Doolittle: Max Scherzer at No. 21? We’re just going to make Max mad, and we’re not going to like Max when he’s mad.

Olney: I’m not sure how Liam Hendriks doesn’t land in the top 100, given his preeminence on the mound last year, and given his preeminence in the free-agent market. In a winter in which most veterans on the open market struggled to find good deals, Hendriks got a three-year, $54 million contract, right in line with the annual payout for the best relievers in baseball.

Doolittle: Zack Greinke didn’t make the top 100. Dustin May did. Zac Gallen did. Mike Soroka did. Not knocking these other guys, but Greinke should get a little more love than not being rated, and he’s way higher in the pecking order than a number of starters who did make it. He’s a top-40 overall player based on the past three years in the aggregate. And I don’t see any obvious reason why we should expect him to go into a performance nosedive. Maybe some of the voters thought we were rating news conference performance.

Schoenfield: I’m not ready to bet against Greinke either, but if you ask me about the player not on this year’s list most likely to crack next year’s, I’m going with rookie third baseman Ke’Bryan Hayes of the Pirates. His plus defense gives him a high floor, his contact ability gives him a chance to hit .300, he hit the ball hard in his September call-up last year and he’s learning to add some loft to his swing. For what it’s worth, he has crushed it in spring training.

Olney: In the midst of his first Zoom call with reporters this year, Trout had to remind reporters that he really isn’t that old yet — his age still starts with a “2.” You get the feeling that with Trout owning the No. 1 spot for so long, some in the industry are itching to push others to the No. 1 spot. But Trout is still the most predictable force in the sport — he has led his league in adjusted OPS+ for five of the past six seasons.

Doolittle: It’s still Trout, but his lead over Betts has dwindled, and if his numbers degrade further, then this could be the year Betts overtakes him as the unchallenged “best right now” in baseball. My thing is that you need to make a clear and obvious case over a multiyear period to knock off an established king, and Betts is not quite there. And after Trout hits 50-plus homers this year and wins a Gold Glove, we might not be asking this question in quite this way next year.

Who is really the best pitcher in baseball right now, Jacob deGrom or Gerrit Cole?

Olney: There have been stretches in which Cole looked like the best pitcher in the sport, like a lot of 2019. But deGrom looks like he’s moving to another level that only the likes of Pedro Martinez, Greg Maddux and Sandy Koufax have experienced.

Doolittle: To me, deGrom has separated himself from the pack and is clearly the best pitcher in baseball right now. And since he keeps getting better and keeps throwing harder, that gap might well grow even wider this season. Frankly, I’m kind of stunned that Cole ranked higher in our process.

Schoenfield: Cole’s claim as best pitcher basically rests on the final two-thirds of the 2019 season when he went 16-0 with a 1.78 ERA over his final 22 starts. But deGrom was better in 2016, better in 2017, better in 2018 and better in 2020, and now he’s throwing harder than ever. Everyone talks about deGrom being a bigger injury risk, but since 2017, he has pitched 690 innings compared to 688 for Cole, so it seems deGrom’s durability is less an issue than it was a few years ago. So the answer has to be deGrom.

Which of the top two shortstops on our list would you rather have for 2021, Fernando Tatis Jr. or Francisco Lindor?

Olney: If the question was built around who you’d prefer long term, it’d be easy to take Tatis. But for 2021, with Lindor in a new place and with a brighter spotlight, I’d take the more experienced player, the switch hitter and better defender.

Doolittle: I’d take Tatis. The argument for Lindor is that his defensive edge outweighs Tatis’ advantage on offense. However, it’s entirely possible that the difference on defense will shrink or disappear, since Lindor is a little older and Tatis has been a rapid improver during his young career. And if they both maintain their levels on offense, then Tatis does everything Lindor can do, only better. And he’s at an age where he could make another leap with the bat, though it’s hard to improve on the kind of numbers he’s put up so far.

Schoenfield: Tatis. As wonderful as Lindor is, he has kind of topped out as a .350 OBP guy — and .335 each of the past two seasons. Tatis is at .374 over his two partial seasons, and given his age and 2020 improvement in both walk and strikeout rate, that OBP is likely to go even higher in 2021. So Tatis will get on base more, match or exceed Lindor in the power department, has more speed and the defensive gap has clearly narrowed. This is no knock on Lindor, but Tatis’ ceiling is best player in the game.