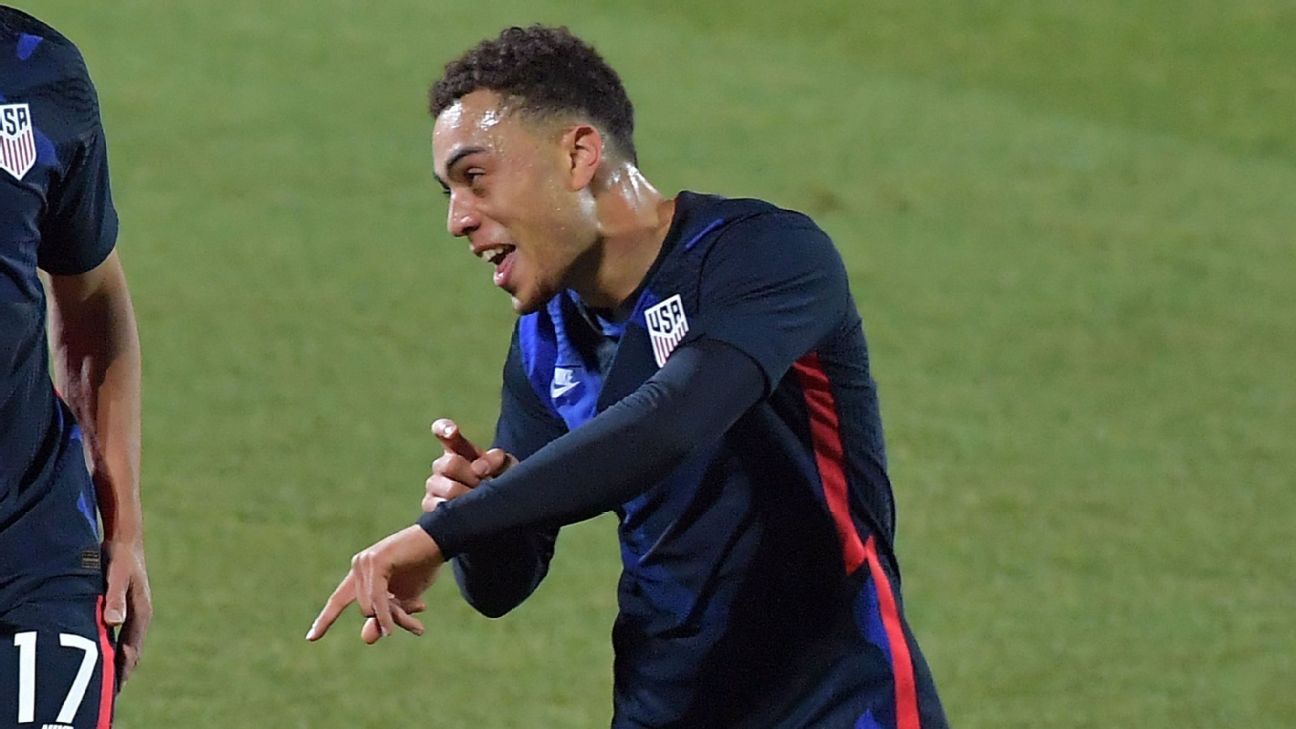 Such has been the progression of U.S. talent, both domestically and abroad over the last 18 months, that the question facing U.S. men’s national team manager Gregg Berhalter isn’t so much where players are going to come from, but rather where to put them. As we found out on Thursday, this is the case even as some of Berhalter’s first-choice XI — like Weston McKennie and Tyler Adams — aren’t available.

On Thursday, Berhalter got some more answers to that question in a 4-1 friendly win over Jamaica, one that was due in part to the performance of left-back Sergino Dest. Left-back has historically been such a problem position for the USMNT to fill, that former winger DaMarcus Beasley took over that role late in his career. That situation has continued into the Berhalter era with no player able to make the position his own.

Enter Dest, who has played primarily as a right-back since committing to the U.S. 17 months ago, but was stationed at left-back on this occasion. Such a switch requires certain calculations on the part of the manager. Does a given player feel comfortable playing out of their preferred role? And most important of all, does it make the team better?

The first question was certainly answered in the affirmative. Dest not only looked capable defensively but also was a force in attack. His finest moment came in the 34th minute when he cut in from the left onto his right foot to fire home a long-range blast for his first international goal.

“First of all, Sergio is sick,” said U.S. midfielder Brenden Aaronson. “He’s so good, man… He’s playing left side first of all, I mean it’s hard enough, but then he comes in on his right, he just bangs it; bangs the shot far post. I didn’t expect anything else. He has that quality.”

Dest also forged an instant partnership with Christian Pulisic — making his first appearance for the U.S. since Oct. 2019 — with the duo causing plenty of problems down the left flank.

“I think the chemistry is good right now; off the field, in the field,” said Dest. “I think if you play more often, it’s only getting better, and right now I’m satisfied with Christian on my side. I think we made some nice combinations also.”

The question of its impact on the team was also positive but less clear-cut. While Reggie Cannon didn’t have his best night on the opposite flank, it is important to remember it was only one game. Berhalter appears to be looking at Dest’s position on a game-by-game basis. There is also the chance that Fulham‘s Antonee Robinson could yet emerge on the left side, while there are more options at Berhalter’s disposal on the right.

“It just depends on the personnel that we have in camp, it depends on who’s in form in the left-and right-back positions,” the U.S. manager said. “But, you know, Antonee is a guy who came in and did really well. We have Reggie. We have Brian Reynolds on the right. We have DeAndre Yedlin on the right. So now we have a ton of people on the right, and sometimes it may make sense to play [Dest] on the left.”

It was a match that provided some other data points as it relates to the U.S. side. The plight of midfielder Christian Pulisic has been an ongoing area of focus as he attempts to secure more consistent playing time with club side, Chelsea. On this night, his 45-minute stint in the first half mirrored that of the team; some rough early touches gave way to more fluidity in attack. The only item missing was the finishing touch, as he failed to convert on a couple of clear looks at goal.

But most encouraging of all was the way some depth pieces are emerging for the U.S. side. To be clear, there will be tougher tests ahead from the CONCACAF opponents that the U.S. have recently faced, starting with Sunday’s matchup against Northern Ireland. Even tougher will be the May 30th tilt against Switzerland. But Kellyn Acosta filled in capably for the unavailable Adams, providing a physical presence in midfield as well some valuable link-play.

Brenden Aaronson replaced Pulisic at half-time and made an immediate impact, putting Giovanni Reyna through on goal in the 52nd minute, and then converting Josh Sargent’s low-centering feed for the U.S.’s second goal of the night two minutes later. Given Pulisic’s injury issues over the last year, that depth piece might prove to be the most critical of all. And if Aaronson isn’t available, it would be worth getting another look at Luca de la Torre, who looked sharp in his 17 minutes of work and set up Sebastian Lletget for one of his two goals.

The assist from Sargent was indicative of his performance on the night, as well as his season with Werder Bremen. He did plenty of dirty work, and his ability to spin away from his defender in the run-up to Aaronson’s goal was top-notch. The only thing that was missing was a goal, and he nearly converted on a couple of occasions, only to be denied by some sharp defending or a matter of inches. At present, Sargent sits atop the depth chart, though Berhalter has made it clear that he needs more from the Bremen striker.

Jamaica did reveal some vulnerabilities in the U.S. that will bear watching going forward. Berhalter noted that the Reggae Boyz threatened in transition, and their goal from Jamal Lowe came on a counter after a U.S. set piece.

But overall the performance contained far more positives. The pieces are beginning to fall into place, which bodes well ahead of a busy calendar that includes World Cup qualifying starting in September.