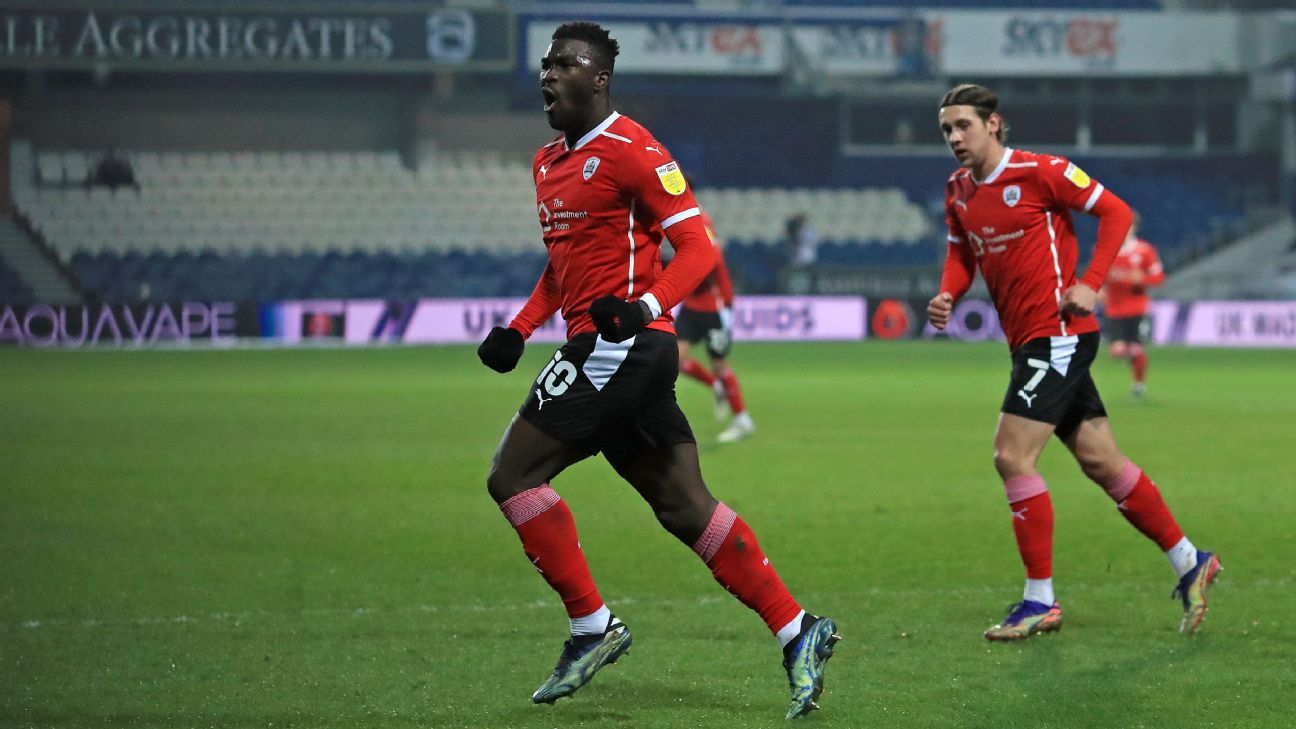 As soon as Daryl Dike finishes a game with club side Barnsley, the critiques come rolling in. They don’t come from coaches or teammates or from social media. Rather they come from Dike’s family.

There’s brother Bright, a former pro, as well as sisters Courtney (a former Nigeria international), Kimberly and Brittny. There’s also his parents, Vincent and Jacinta. The stream is almost endless.

Given all that has transpired in the past 18 months, the impulse to keep Dike’s feet firmly planted on the ground is understandable. In the fall of 2019, Dike was suiting up in the NCAA Men’s College Cup final for the University of Virginia. That season set the stage for getting drafted by MLS side Orlando City SC, where he scored eight goals and had four assists in 19 league and playoff appearances, and was a finalist for Young Player of the Year. That translated into a loan deal with English Championship side Barnsley, and after scoring five goals in 11 league appearances, Dike is now being linked with clubs in the Premier League’s “Big Six” of Manchester City, Manchester United, Chelsea, Arsenal, Tottenham Hotspur and Liverpool.

“The transition has been crazy,” said Dike. “I think it’s something that throughout my entire life I’ve kind of looked forward to. I’ve kind of dreamed of having this transition and being able to play with top-quality players and top-quality staff. It’s been phenomenal.”

Most impressive of all is that Dike has managed to adapt to a soccer culture and tactical approach far different than what he experienced in Orlando. The cold and rain of England is sharp shock from the heat and humidity of central Florida. And he’s no longer the biggest, strongest man on the field.

“You see a lot more direct play, and physicality, it’s a big factor now,” he said. “I think when I go into the game, I might get pushed a little bit more, and I have to use my brain a little bit more to kind of think about how I can get my way around being pushed over or getting into a physical battle. I think that’s the main difference for me, is the style of play. But luckily with the good staff, the players I have, they’ve kind of done a good job of integrating me into the team and kind of thinking like, ‘You know this will work for you. This won’t work for [you].'”

The next challenge is for Dike to prove his worth with the U.S. men’s national team in upcoming friendlies against Jamaica and Northern Ireland. The list of competitors for the lone striker spot is crowded, but largely unproven, with Werder Bremen‘s Joshua Sargent and Caen’s Nicholas Gioacchini and Young Boys’ Jordan Siebatcheu the primary competition in this camp. But U.S. manager Gregg Berhalter recognizes that in Dike, he has a striker with a different kind of profile.

“You see some really good actions back to goal, in and around the penalty box, really good strength holding players off,” said Berhalter about Dike. “He still needs to continue to work on his movement in the penalty box, movement behind the backline. I think sometimes when we’re asking him to come down and link up play, it’s a little bit different than the other guys.

“He needs to be consistent; it needs to be sustainable. So Daryl needs to continue on with this form, continue to push forward. He’s a guy that we really enjoyed working with. We see a lot of potential in him and it’s just continuing to progress for him.”

No less incredible has been Dike’s path to the professional game. His hometown of Edmond, Oklahoma, isn’t known as much of a soccer hotbed. Prior to Dike’s debut with the U.S. last January, just two native Oklahomans — Joe-Max Moore and Zach Loyd — had made senior team appearances for the U.S. And yet such is Dike’s size, mobility and finishing that he’s excelled at each rung of the ladder, even as some teachers and coaches encouraged him to give the other kind of football a try.

“I’m not gonna lie to you, I always wanted to try it, but at the same time, my parents, they don’t really like American football too much,” he said. “It’s pretty dangerous. I don’t blame them at all.”

But Dike remains very aware of where Oklahoma ranks in terms of the soccer hierarchy in the U.S. There were no academies nearby, which meant fewer scouts and even fewer opportunities to get noticed. That reality can wreak havoc on the psyche of a player with pro aspirations.

“It’s crazy because I think every single player [from Oklahoma] may have this kind of thought, you’re going to have this little mental battle with yourself,” he said. “You look at the national team, you look at the youth national team and you look at all these other people and there’s no [non-academy players] on those teams. You look at them, and you’re sitting there thinking, ‘How can I be able to be with those players if I’m not in an academy? Will I be good enough? Will I have the opportunity?'”

Early exposure to the game always helps, especially with Bright being 14 years older than Daryl. What started out as Daryl tagging along to watch his older brother’s games morphed into more specialized instruction when the opportunities presented themselves. And as his younger brother grew older, Bright was increasingly amazed at what Daryl could do.

“You look at some of the things that Daryl was doing at a young age, and you’re just like, ‘Man, this kid is special,'” said Bright. “Even when he was only like 12, I would do soccer camps with college kids. And I would literally say the same things to him that I would say to a college person. And he would understand. You’re like, ‘Wow.'”

Daryl also credits his youth coaches, who continued to challenge him in varying ways, whether it was playing up an age group or training with older players. It was then up to the player to maximize those opportunities.

Daryl’s Oklahoma roots meant for a more old-fashioned path to the professional ranks, one in which the college game can be a valuable waystation. Fortunately, Bright in some ways blazed the trail for his younger brother, excelling collegiately at Notre Dame before playing with the Portland Timbers and Toronto FC, among others. That allowed Daryl to be on the radar of some major collegiate programs, including Virginia. His exploits in Charlottesville got him noticed by Orlando.

Virginia men’s head coach George Gelnovatch admits he didn’t see Daryl play in person before the player arrived at Virginia, relying on video and the reputation of Bright. Once Daryl arrived on campus, Gelnovatch realized that there was more to the player than just his physical attributes.

“There were moments [of game savvy],” said Gelnovatch. “But one of the things about him that nobody ever talks about is relentlessness. He is a relentless competitor, a ruthless guy on the field. You put that inside a body like his, and it’s pretty impressive.”

Gelnovatch also noticed that Dike made a massive improvement in his first year, dropping 15 pounds and getting immersed in a more sophisticated attack. That trend has continued.

“Then the next big jump was at Orlando, so he’s in another proper setup, and with pros all around him,” said Gelnovatch. “I think he’s capable of another one.”

And at each step, Bright was there to offer advice. Daryl said that Bright is “100%” his harshest critic of all. After one game with Orlando City last season, Daryl was getting kudos and Bright was having none of it, telling his kid brother how he could improve his positioning.

“I actually told him, I thought it was one of his worst games for specific reasons,” said Bright. “And then after that, he scored in four games in a row.”

That might sound like meddling to some, but for Daryl it provides an effective counterweight to the noise from outside. He said, “I think kind of having that professional person in your background to always kind of be in your ear and help you succeed and grow as a player … It’s good to have a person like that.”

“I kind of told myself to live in the present,” said Daryl. “I think some players may get caught up in looking into the future and they forget to just kind of slow down and look at what they can do now. That’s how I’ve lived my entire career, my entire life. I think of what I can do today to prepare myself for tomorrow.”

Such is Daryl’s progress that Bright now allows himself to take stock of what his younger sibling has accomplished, even issuing a compliment or two.

“I have a lot of my former teammates being like, ‘Man, I just remember us playing games and seeing your little brother on the sideline, kicking a soccer ball. And he was only like four years old,'” Bright said. “Now you see him on the big stage.”

If Daryl’s form holds, the stage could get even bigger.