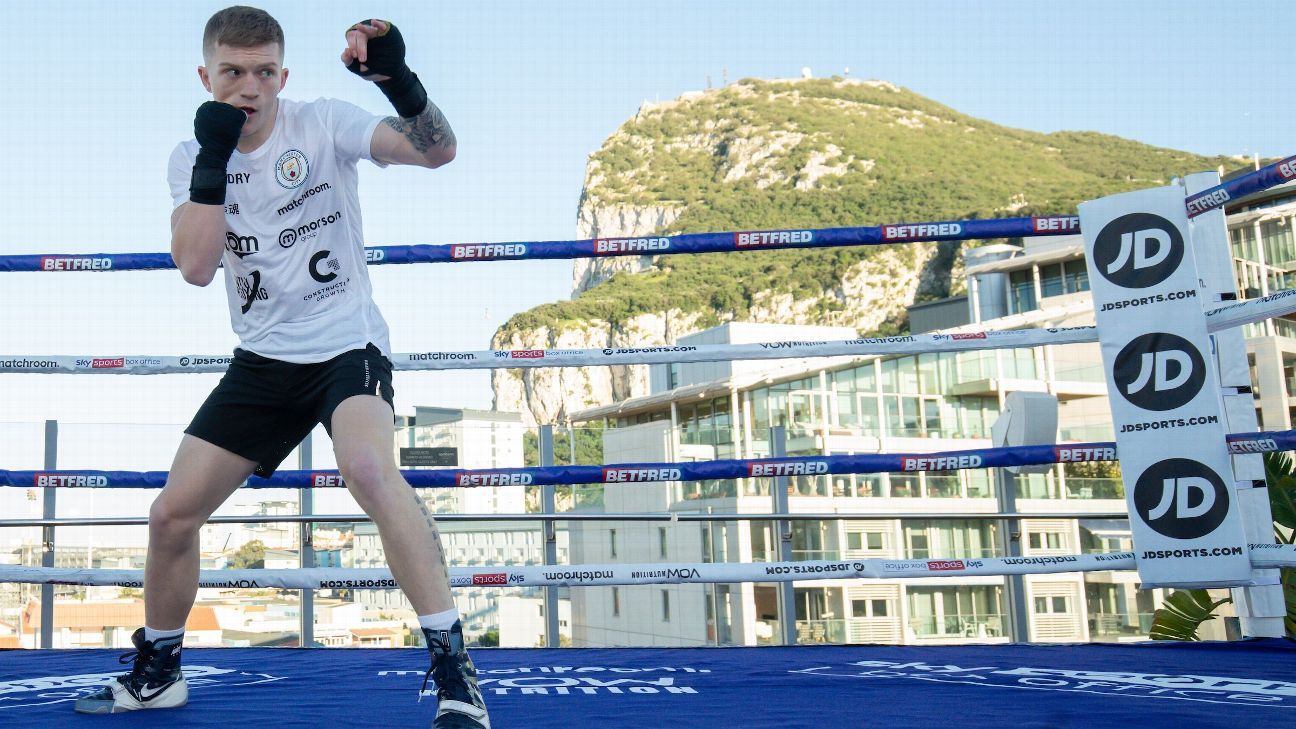 When Britain’s Ricky Hatton made his professional debut in 1997, he recalled hardly anyone turning up at the Kingsway Leisure Centre in Widnes to see him record a first-round knockout. In the same way, Ricky’s son Campbell will have a similar start to his career as he goes into his first professional fight on Saturday; but this time Campbell will be under the spotlight.

Due to coronavirus restrictions, there will be an audience of only 500 people when Hatton faces Mexican Jesus Ruiz (41-9-5, 29 KOs) at the Europa Point Sports Complex in Gibraltar. But it is an improvement on no crowd as would have been the case had the show taken place in England.

Hatton begins his professional career in the British overseas territory located on Spain’s southern tip and on pay-per-view television with the publicity of being the eldest son of Ricky, who won world titles at two weight divisions in a career which saw him attract a huge following for fights in England and in the United States.

“There was only my family in the venue and they were practically sweeping up by the time I got on,” Ricky said, who was just one month short of his 19th birthday when he made his professional debut following Robin Reid’s WBC world super-middleweight title defence against Hacine Cherifi.

Ricky went on to fight some of boxing’s biggest names at the time, beating Kostya Tszyu for the junior welterweight title in his home city of Manchester, England, in 2005 before knockout losses to Floyd Mayweather Jr. and Manny Pacquiao — the best boxers of their generation — in Las Vegas in 2007 and 2009 respectively. When Hatton fought Mayweather, it is believed 30,000 fans travelled from the UK.

When it comes to advice on what to expect on Saturday, 20-year-old Hatton can tap into the knowledge not only of his dad and manager Ricky but his uncle and trainer Matthew, who took Saul “Canelo” Alvarez to points for the WBC world junior middleweight title ten years ago.

“Dad always says about his debut that he was really nervous and he was keen to put on a good performance,” Hatton told ESPN.

“He thinks that’s why he got cut a lot in his career because he was over-eager. I will be nervous, no doubt, it will be one of the biggest days of my life, but I’ve got to keep that little bit of composure and that’s what he really feels is important.”

Campbell was pictured with his father throughout his career, but it was not until he was a teenager that he got serious with boxing.

“I didn’t really have a clue what I wanted to do growing up,” he said. “I never watched any of dad’s fights live because I was too young. But I was always in the gym ever since I was a baby. I even had my nappy changed on the ring apron.

“I had always done bits of training and always enjoyed boxing. When my dad had his comeback fight I was old enough to pay attention to it and know what was going on and after that I started to pay more attention to boxing. I went down to a local amateur gym and that’s where I found a love for it and maybe make a career out of it. I was around 14 when I found a passion for boxing at Northside ABC in Clayton. I did have some success in the amateurs but I was always working towards turning professional as soon as possible because my style was tailor made for it.

“I got about 30 odd fights as an amateur and then the lockdown happened. With another year I would have probably had another nine months of amateur career. The lockdown made me have a rethink and for the sake of having a bit more time, was it really worth it and it made my decision to turn over a bit easier. It’s the best decision I’ve ever made because I’ve had more drive in the gym since making that decision.”

What can we expect from Campbell? Apart from inheriting his dad’s high cheekbones and his sense of humour, he says his boxing style will also fill fans with a warm sense of nostalgia.

“People who liked watching my dad will see there are similarities with me,” he added. “I’ve got a high work rate, good body punches and am very aggressive, but I like to pick my shots as well, working off the jab.

“Over the past few weeks as we have got closer to the fight we are thinking super-featherweight might be a big ask. We are thinking lightweight to start with. Matthew is a big believer in not forcing a fighter to get too much weight off especially when they are young. I’m still growing, and I’ve got a lot of filling out to do, so I could possibly make light-welterweight in years to come. My mum and dad are both short a—s and I’m about the same height as my dad.”

Inevitably, one of the biggest challenges for Campbell early on in his career will be managing expectation of being the son of perhaps the most popular boxer in British history. Other sons of famous boxers, including Tszyu’s son Tim in Australia, are also attempting to make a name for themselves.

“We have spoken about it [expectation, pressure of being Ricky’s son],” Campbell said. “Even through the amateurs there was always a bit more interest when I boxed. The room would fill up and I always had to deal with that on a smaller level, but I’ve always thrived on it to be honest. I have to perform at my best all the time because there are so many eyes on me.

“People will make comparisons but I just have to concentrate on go in in there and doing what I can do. My dad had such a great career and I want to do the same myself, but it’s not going to happen overnight. I’ve got time well on my side and you don’t need to rush things, we can do it professionally and we just have to be patient. My dad was exciting, and I do believe I will bring some excitement but realistically I’ve got to learn my game first.”

Campbell’s first lesson in the pro game comes tucked away on the undercard of the heavyweight bout between Alexander Povetkin and Dillian Whyte on a Matchroom bill, but there will be plenty of interest back home in England from fight fans eager to recall memories of “Hitman Hatton.”