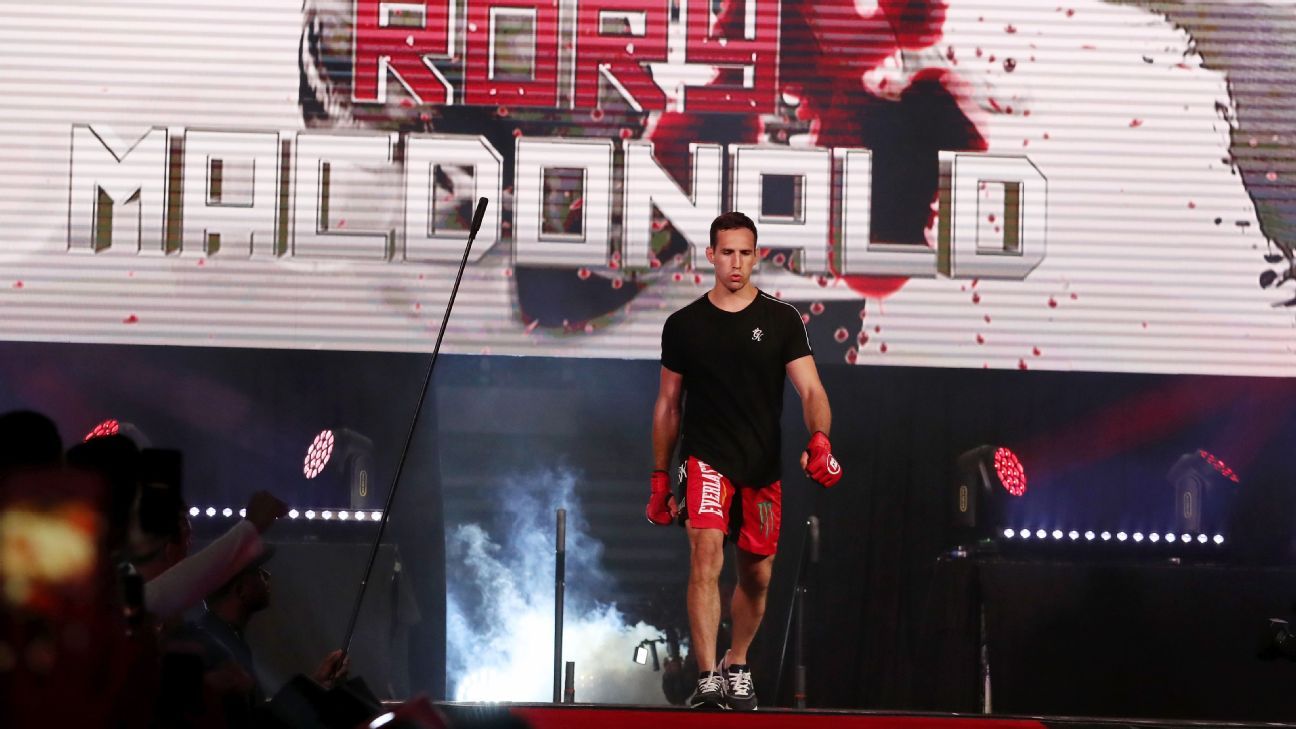 Rory MacDonald‘s 2015 challenge of UFC welterweight champion Robbie Lawler was an absolute classic. A year and a half after Lawler had edged out MacDonald by split decision in a nontitle bout, they went at each other relentlessly for the belt for 21 bloody, bruising minutes.

MacDonald wobbled Lawler with a head kick in the third round and did it again in the fourth, and as he unleashed a swarm of elbows and knees against the cage, and referee John McCarthy implored Lawler to fight back, it was looking like there was about to be a new champ.

But Lawler did fight back, survived to the horn and found respite on his stool. The champ then came out of his corner for the final round determined to make a stand. Both men’s faces were awash in crimson as they met at the center of the cage, and the Las Vegas crowd was roaring. Moments later Lawler unleashed a straight left hand that crumbled MacDonald, his nose crushed.

The fight was over. But the accolades had just begun. Lawler vs. MacDonald 2 earned Fight of the Year honors from ESPN and several other media outlets. There’s an argument to be made that it’s the greatest MMA fight of all time, and fans certainly felt that way in 2017.

With the glory came a cost. Those four-plus rounds of brutality took a lot out of both men. Lawler reigned through just one more title defense and has lost five of his six bouts since then, including his most recent four. MacDonald dropped his next fight, then was gone from the UFC.

To say MacDonald was done as a fighter after the Lawler brawl would be an exaggeration, though. The native of British Columbia, Canada, who trains in Montreal, did go on to win the Bellator championship in 2018. But then he took another beating when he tried to add Bellator’s middleweight belt to become a double champ, and that started him on a skid that continues to this day. He has won just one of his last five fights. MacDonald is only 31 years old, but it’s been years since he looked like his formerly elite self.

Now he has a new stage on which to show what he’s still capable of. MacDonald joined the PFL in December 2019, the biggest signing in the promotion’s short history. The plan was for him to make his debut in 2020, but that season was cancelled because of the coronavirus pandemic. MacDonald will finally enter the PFL cage on April 29 in Atlantic City, New Jersey, to open the 2021 PFL welterweight season.

The expectation among casual fans might be that MacDonald, whose name still means something, should go ahead and start spending the $1 million he’ll surely pocket come New Year’s Eve for winning the 2021 championship. This is the PFL, after all, not the UFC or even Bellator. But a closer look at the PFL’s 170-pound division reveals a fairly deep roster, starting with MacDonald’s season-opening opponent, fellow UFC alum David Michaud. The Oglala Lakota from South Dakota was a welterweight finalist in the PFL’s 2019 season.

The champions from both PFL seasons — 2019 winner Ray Cooper III and 2018 winner Magomed Magomedkerimov — are back for more in 2021. And among the promotional newcomers are former UFC fighters Gleison Tibau and Aleksei Kunchenko. It’s looking like a competitive season.

Still, if this were the old MacDonald storming into the PFL cage, it’d be no problem for him to collect the big check. But today’s version? Like most of the PFL roster, he has not competed since 2019. Last we saw him, in a listless decision loss to Douglas Lima that handed the Bellator belt back to the man MacDonald had taken it from, he did not show the energy and aggression that once made him special. Can MacDonald recapture that in this new chapter?

As much as the PFL’s signing of its star performer elicited exclamation-point reactions, there also are lots of question marks. It’s time for some answers.

That’s right, I’m not going with MacDonald here or even defending champ Ray Cooper III. To me, the favorite is Magomedkerimov, who beat Cooper to win the welterweight championship in 2018, the PFL’s inaugural season. The 31-year-old Russian was scheduled to face the Hawaiian again in the 2019 semifinals but had to pull out due to illness shortly before the bout, after he already had fought once that night. So while he did not get to go for a second straight $1 million, Magomedkerimov does still own an 11-fight winning streak that extends back to 2015. He’s going to be tough to beat.

This pick might look silly in a few months. If MacDonald is standing in the cage on New Year’s Eve holding an oversized replica check as 2021 champ, the thinking among many observers will be of course the former UFC title challenger and Bellator champ outclassed the PFL competition. On the other hand, if MacDonald looks the same this season as he did in his past few outings and fails to take charge of the PFL welterweight division, the thinking will be of course he has nothing left, wasn’t it obvious? So this seems like a reasonable spot to place a fighter who might be the best the PFL has ever seen, but might also prove to no longer be that guy.

Tibau ended his 28-fight UFC run in 2018 after suffering four straight losses, although two of them came against the stout Tony Ferguson and Islam Makhachev. He’s 37, so who knows where this Brazilian now stands as a fighter as he enters the PFL? Kunchenko will test him right off the bat. The Russian was 20-0 and on a roll in the UFC when he ran into future title challenger Gilbert Burns in 2019. He lost that one and his next Octagon appearance, and here he is in the PFL, starting over at age 36.

Welterweight division at a glance

Age: 35
Height: 5-foot-9 | Reach: 69 inches
Career record: 24-9
PFL record: 3-0
Notable PFL highlights: Was No. 2-seeded welterweight in 2018 PFL season, but forced to drop out with knee injury; joined 2019 PFL season midway through as replacement for Gamzat Khiramagomedov and won his lone 2019 fight, but failed to qualify for playoffs

How to watch the PFL fights

Watch the prelims on ESPN+. If you don’t have ESPN+, get it here.