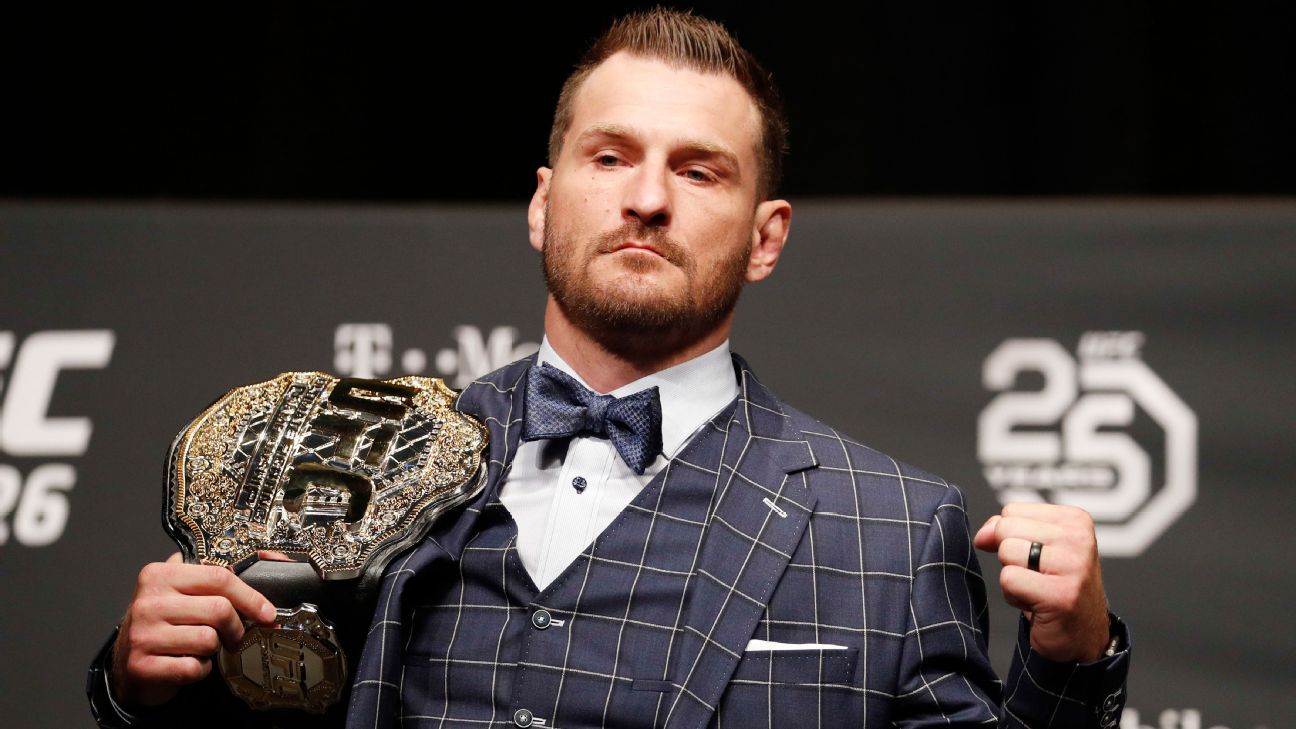 LAS VEGAS — UFC heavyweight champ Stipe Miocic has a gym in the basement of his Cleveland-area home, and occasionally his 2-year-old daughter, Meelah, will walk over and hit the heavy bag a few times.

That’s the extent of Meelah’s exposure to her father’s career as a professional athlete. Miocic and his wife, Ryan, who is due with their second child — a son — in August, don’t allow Meelah to watch her father fight. They’re waiting for the right time — years in the future — to discuss the career that will land Miocic in the UFC Hall of Fame.

And when the occasion does present itself, Miocic plans to keep it simple.

“This is your dad,” Miocic said he’ll tell the kids. “He worked hard, and this is where it got him.”

It’s an understated approach that defines Miocic’s career, and it may be why the appreciation of his work hasn’t yet caught up with his accomplishments. Whether it’s oddsmakers, former UFC champs or casual fans, Miocic doesn’t get the acknowledgement befitting the greatest heavyweight in MMA history. Maybe by the time Meelah and her brother are old enough to learn about their father’s greatness, his status will be secure.

Miocic has put together an all-time great résumé. Beating Daniel Cormier in a trilogy fight at UFC 242 last August was supposed to cement Miocic as the heavyweight GOAT. He has double the amount of UFC heavyweight title defenses (4) of the closest behind him. And yet, as UFC 260 nears, Miocic finds himself as the underdog — again — to Francis Ngannou, a man he has already dominated in the cage.

Miocic has been the betting favorite in just two of his eight title fights. At least one sportsbook has Jon Jones, who is likely to face the winner of Saturday’s main event, as around a -150 favorite against Miocic. And Jones will be making his heavyweight debut.

It’s a testament to how popular Cormier and Ngannou are with the betting public, said Caesars William Hill director of trading Nick Bogdanovich, who added, “I guess you could make a case [Miocic] is the Rodney Dangerfield of the UFC.”

Some athletes use the “no respect” angle as motivation. Miocic laughs and says he enjoys proving people wrong.

Miocic has fought his 11-year career while also being a part-time firefighter and paramedic in Valley View, Ohio, a job he credits for keeping him grounded. When he retires from the UFC, he plans on becoming full time at the firehouse. Miocic says when folks he doesn’t know ask him what he does for a living, he just tells them he’s a fireman.

Miocic’s lack of self-promotion hasn’t harmed him in the cage, but it has definitely hurt him in terms of fame. A heavyweight champ is usually viewed as a major revenue driver for combat organizations, but Miocic doesn’t check that box, and his social media profile pales in comparison to those of his peers. In terms of Instagram followers, Miocic is sixth out of the 11 UFC champions, with relatively new titleholders Jan Blachowicz, Zhang Weili, Alexander Volkanovski, Aljamain Sterling and Deiveson Figueiredo the only ones having fewer.

In interviews last summer, several past UFC heavyweight champions downplayed Miocic’s credentials. On whether the Miocic vs. Cormier 3 winner would be considered the best heavyweight of all time, Josh Barnett‘s answer was a “resounding no.” Ricco Rodriguez didn’t put Miocic in that category unless “statistics” came into play. Antonio Rodrigo Nogueira, Junior dos Santos and Fabricio Werdum said former Pride and Strikeforce star Fedor Emelianenko is the best heavyweight of all time.

Miocic is not as big as Ngannou, who could weigh around 30 pounds more than the champ on fight night. Miocic doesn’t have the gift of gab like Cormier, who has parlayed his fighting career into a television analyst role. Miocic doesn’t have the knockout ratio of some heavyweights. All of those factors may play into why Miocic’s achievements outweigh his hype.

The combat sports world is attracted to drama and excess. Six months before the biggest fight in UFC history — Khabib Nurmagomedov vs. Conor McGregor at UFC 229 in October 2018 — McGregor was arrested for throwing a dolly at a bus Nurmagomedov was in. One of the most talked-about fights in boxing right now pits trash-talking, polarizing YouTube star Jake Paul against former UFC fighter Ben Askren, who has never had a pro boxing match.

Stipe Miocic explains how he’s improved as a fighter since his first bout vs. Francis Ngannou and expresses confidence that he’ll win their rematch on Saturday.

Miocic is not a great quote, and he embraces that. He acknowledges that talking to the media is not his favorite thing. He prefers to let the UFC promote his fights, rather than generating his own hype.

It’s possible that the true appreciation of Miocic’s career will come only when he’s gone, when others might struggle to reach the bar Miocic has set with sustained excellence.

“Everybody doesn’t get their respect while they’re in there, while they’re fighting, while they’re competing,” former UFC welterweight champion Tyron Woodley told ESPN. “Muhammad Ali didn’t. He didn’t get it until afterwards.”

Time is ticking on Miocic’s career. He’s 38 and moving into his second decade of fighting. But before he’s done, he’s facing what could be his biggest year. If he beats Ngannou, there’s the highly anticipated matchup with Jones looming on the horizon.

Miocic said he’ll retire when he stops having fun — and that has not happened yet.

“I am so proud of [my career], of course,” Miocic said. “We have such a big family in the fight game with my coaches and teammates and my family and friends. It’s awesome. It’s like a storybook, and I love it. We’re not done with it yet, though.”

Legacy is important to Miocic, but it’s more about the journey than the accomplishments.

“Always be a good person, no matter what,” Miocic said he’ll tell his children. “I want them to grow up to be great people and just be kind to everyone, no matter who it is. I want them to work hard. Everything is earned, it’s never given.

“Hard work pays off. I want to show them that.”