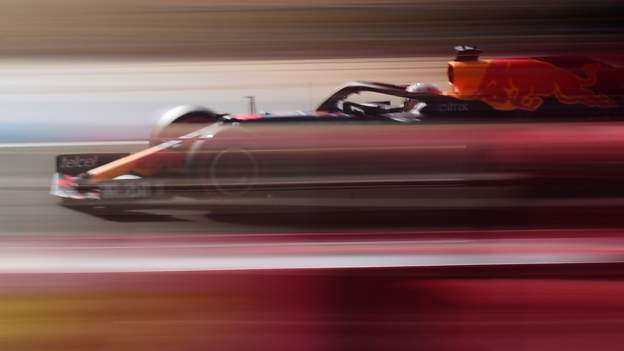 Verstappen was first and Bottas second in the first session with Norris third.

The field appeared very competitive – less than a second separated Verstappen in first place from Fernando Alonso’s Alpine in a disappointing 15th.

It was a mixed day for all the movers up and down the grid.

Sainz impressed in the Ferrari, his team-mate Charles Leclerc not stringing together a strong lap and ended up 12th, 0.5secs off the Spaniard.

And Alonso, returning to F1 after two years away, was four places and 0.169secs down on Alpine team-mate Esteban Ocon.

Verstappen’s pace continued the strong impression Red Bull had left after pre-season testing, in which Mercedes were struggling with an unstable car.

Mercedes appeared to have made progress since then, with the car looking much more stable out on track – although Bottas did complain that it was “undriveable” when on his race simulation run late in the second session.

On the race runs, there was nothing to choose between Hamilton and Verstappen, both averaging more or less the same time over their stints.

McLaren were the other team to make a big impression on the first day of the new season, while Ferrari also appear to have made a step forward after their worst season in 40 years in 2020.

Meanwhile, Alpine and Aston Martin – the new names for the teams that were called Renault and Racing Point last year – had a low-key day.