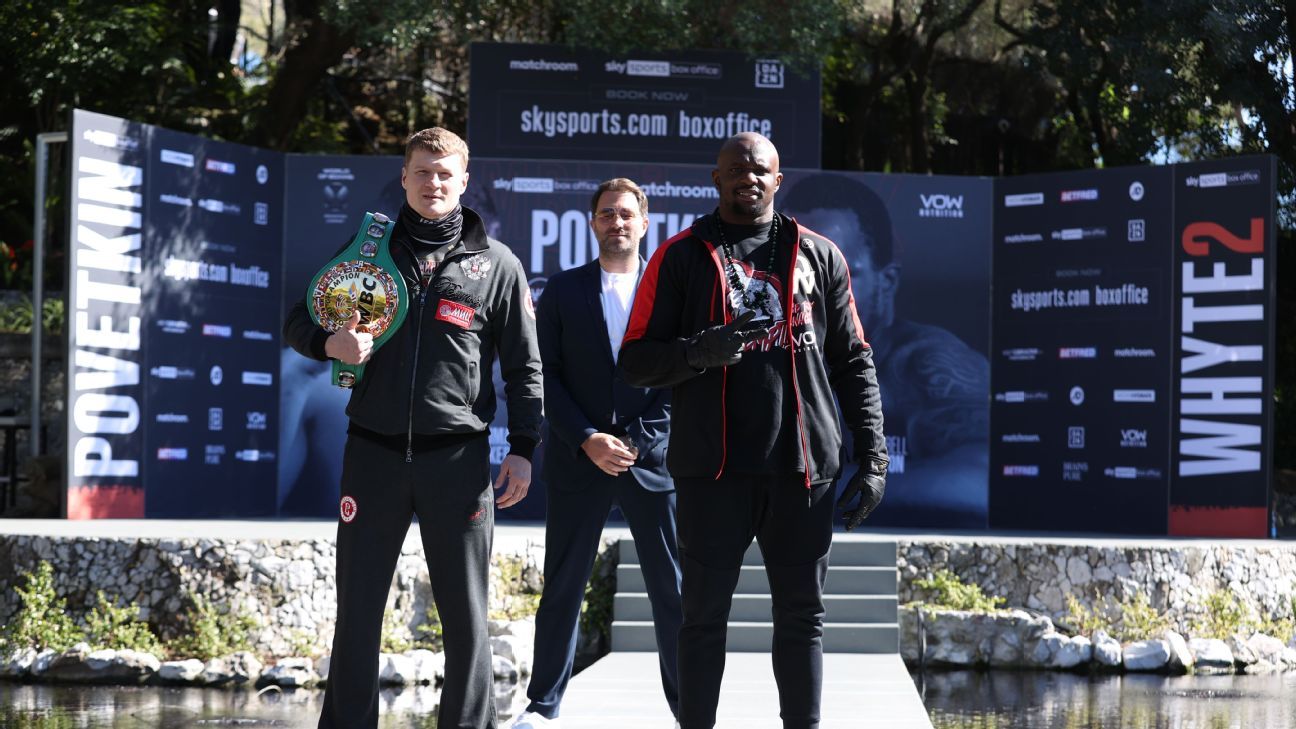 Dillian Whyte has taken measures he hopes will ensure his career is not washed up and wrecked on the Rock of Gibraltar in Saturday’s rematch with Alexander Povetkin.

After getting knocked out by the 41-year-old Povetkin in August, Whyte insisted on a rematch as soon as possible rather than taking a fight in the interim to restore. After delays due to COVID-19, the English heavyweight must beat Povetkin to put himself back into title contention with the WBC interim heavyweight belt once again on the line at the Europa Point Sports Complex, Gibraltar.

Whyte-Povetkin II was initially set for November, but Povetkin tested positive for COVID-19. In the interim, Matchroom promoter Eddie Hearn moved the rematch from London to Gibraltar, a British overseas territory located on Spain’s southern tip. He did that so Whyte would not have to quarantine for 10 days at a designated hotel in London after arriving from his training base in Portugal due to COVID-19 restrictions before the fight, limiting his training just before the fight.

Whyte, the Jamaica-born, London-based boxer, has positioned himself for success. Now he has to follow through.

“I want to put the wrong right as soon as possible,” Whyte told ESPN from his training base in Portugal.

“In Loughborough [England] it’s a general set-up for a lot of different athletes, I was just one of the letters there, but here [in Portugal] it’s set up around me and I’m the main man. They are all pushing me giving 100% of their time. I decided to do my own set up, plus it’s warmer here.”

Whyte (27-2, 18 KOs), 32, also hopes the addition of Harold Knight to his corner will bring decisive experience after he went from controlling the fight against Povetkin (36-2-1, 25 KOs), to suddenly having his senses scrambled by a left uppercut.

Knight was part of the team under highly-respected trainer Emanuel Steward when he worked with world heavyweight champion Lennox Lewis. Steward, whose home base was in Detroit, helped Lewis win rematches against Oliver McCall in 1997 and Hasim Rahman in 2001.

Whyte split with London-based trainer Mark Tibbs in the summer of 2020 and has been working with Knight, along with Xavier Miller. The Povetkin rematch will be the first fight with Whyte having Knight in his corner.

“Harold is very experienced, and he’s very vocal — you can hear him from a mile away,” Whyte told ESPN. “Harold has been involved with multiple world title fights with Lenox Lewis and one of the only old training guys left in the sport. He has an old school mindset to boxing, he was with Lennox all through his career and he knows how to keep my calm under pressure. Harold learned from being around Manny and Lennox so he brings a lot.

“He makes my corner stronger, and I need that. Povetkin has got a world of experience. He’s probably fought about 15 people like me, he’s been in world title fights down the years, but regardless of that I’m going to get the job done.”

Whyte felt a change was necessary after recent form and results. After losing his unbeaten record by stoppage defeat in December 2015 to English rival Anthony Joshua, who is now the WBA-IBF-WBO world heavyweight champion, Whyte rattled off 11 straight wins to earn himself the No. 1 spot with the WBC governing body. However, he came out flat in a listless win against Mariusz Wach in December 2019, and was then left flat out by Povetkin last year.

It’s worth noting that before the fifth-round stoppage to former world title challenger Povetkin, Whyte looked on the brink of victory and dropped Povetkin twice in Round 4. Then disaster struck in a single moment.

“I switched off for a split second, I thought I had the fight in the bag and thought I would pick my punches and take him out a round later,” Whyte told ESPN.

“I learned my lesson. We all make mistakes and sometimes a mistake makes you stronger, makes you realize certain things that you wouldn’t have realized if you had won and everything had gone OK. I can’t give him too much space again, that’s what happened last time. If you watch my last three or four fights I’ve changed mentally and physically in all of them. I’ve got the ability to change my style but I’m still learning the job and I’m still improving.”

Whyte went into the Povetkin fight last year as the WBC’s highest ranked contender, but defeat relegated him to No. 5 in the governing body’s list (Povetkin is first in the queue as WBC interim titleholder), and does not feature at all in the other three governing bodies’ top 10.

In previous years, pre-fight talk with Whyte has revolved around a WBC title shot, and for a long time his frustration at having to wait for an opportunity to fight American Deontay Wilder. After Whyte’s fellow English boxer Tyson Fury beat Wilder in February 2020, and with Fury set to face rival champion Joshua twice over the next year, Whyte’s focus has narrowed to just his next move.

“I’m completely focused on being in a war with Povetkin, I’m not going to overlook him this time, give him room and space. If I don’t win this fight, the Wilder fight can’t happen. Right now I need to get rid of Povetkin, and then we will see what happens next.”

Tale of the tape

At 20 years old, Campbell Hatton is set to make his professional debut on the undercard of Povetkin-Whyte 2. Generally speaking, someone that far down the card wouldn’t garner significant attention, but Hatton is an exception because of his lineage. He’s the son of former junior welterweight and welterweight world champion Ricky Hatton, the British boxing icon and 2005 ESPN Fighter of the Year.

“People will make comparisons, but I just have to concentrate on going in there and doing what I can do,” Campbell told ESPN. “My dad had such a great career and I want to do the same myself, but it’s not going to happen overnight. I’ve got time well on my side and you don’t need to rush things, we can do it professionally and we just have to be patient. My dad was exciting, and I do believe I will bring some excitement but realistically I’ve got to learn my game first.”