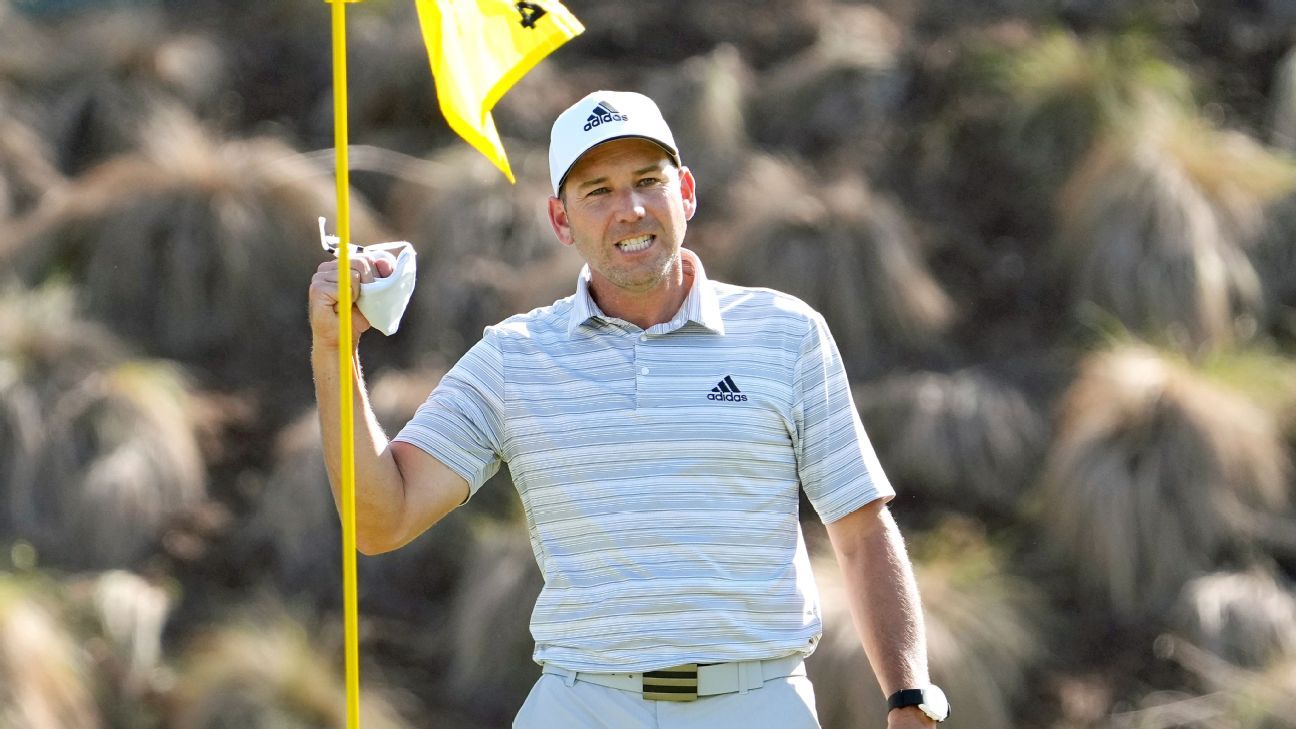 AUSTIN, Texas — Sergio Garcia advanced in a sudden-death playoff with a hole-in-one on the fourth extra hole of the Dell Technologies Match Play on Friday.

Garcia hit a 9-iron that landed just beyond the hole and rolled back a few inches.

That gave him a victory over Lee Westwood and sends the Spaniard into the knockout stage of the weekend for the third straight time at Austin Country Club.

“I don’t know. I really don’t know what to say,” Garcia said. “…. You get lucky that, first of all, it doesn’t hit the flag, because it was very close to hitting the flag — and then it rolls back in. (I’m) obviously very happy about that. I’m sorry for Lee … but, unfortunately, one of us had to lose.”

• Kevin Na lectured Dustin Johnson and then sent him home.

Na won the last two holes with birdies, from 20 feet on the 17th and with a wedge to 4 feet on the 18th hole. That gave him a 1-up victory over the No. 1 player in the world. Johnson won the Match Play in 2017. He has failed to get out of group play the last three times.

The match got testy on the 11th hole when Johnson’s 8-foot birdie putt lipped out. He picked it up from inches away and Na stopped him to say Johnson has to wait for the putt to be conceded. Na won the next hole to square the match and it was tight the rest of the way until Na’s big finish.

Johnson only needed to halve the last hole to assure at least a sudden-death playoff. Instead, the winner was Robert MacIntyre with, prior to Garcia’s ace, was the shot of the tournament. He hit driver on the 18th hole that rolled to within 3 feet of the cup as Johnson was lining up his par putt in the group ahead.

MacIntyre’s eagle gave him a halve, and that was all he needed to win the group after Johnson’s loss.

• Tommy Fleetwood has made it to the weekend thanks to two great escapes on the same hole to beat Bryson DeChambeau.

Fleetwood was 1 up going to the 18th when he mysteriously opted to hit driver and went left into a drainage ditch in a hazard. DeChambeau drove just short of the green. Instead of taking a penalty drop, Fleetwood hacked out of the ditch well right of the green, some 80 feet away. From there, he had no angle to the flag. But he hit a perfect flop shot to 5 feet.

DeChambeau missed his 10-foot birdie putt. Fleetwood made his par. “An unlikely par,” he said with a smile.

Fleetwood reaches the weekend knockout stage for the second time. He will face Dylan Frittelli, who became the first No. 64 seed to advance since the Match Play switched to group play in 2015.