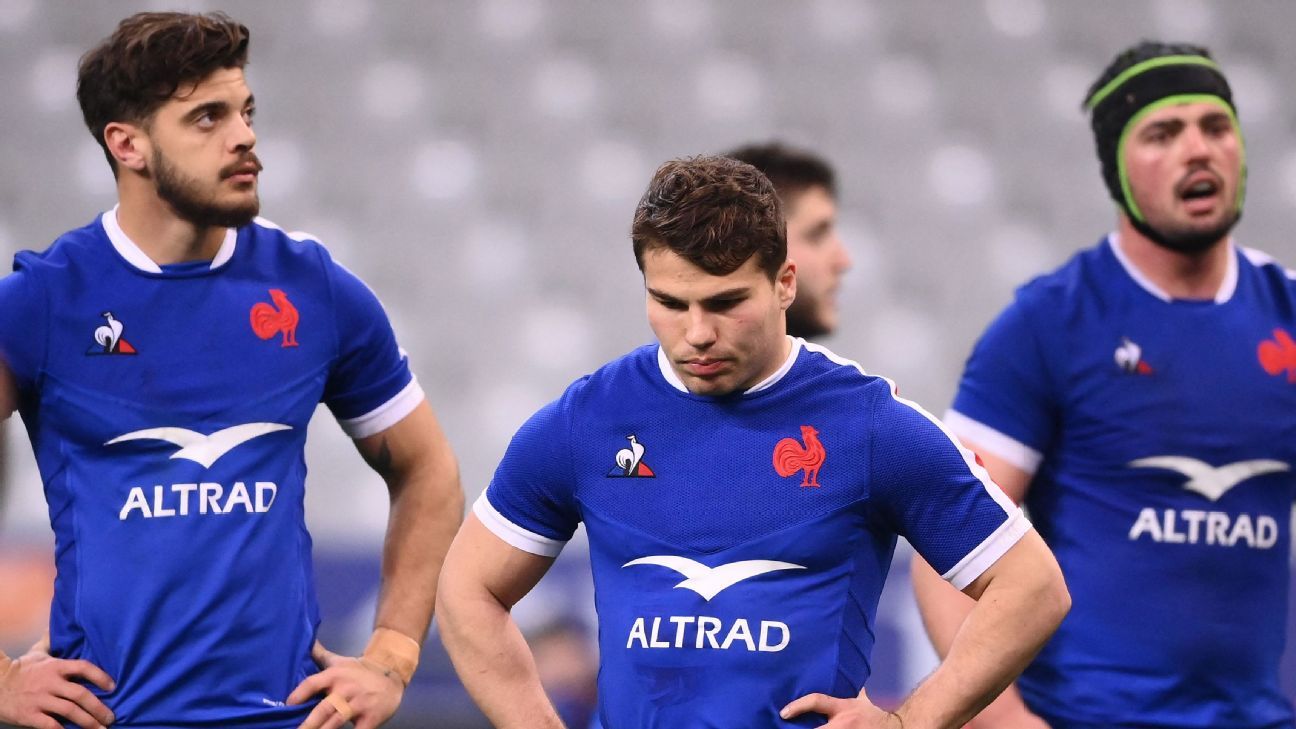 If there’s one thing this Six Nations has proven, it’s that rugby never stands still.

The balance of pressure on the international scene is a shifting beast and with one championship-deciding match still to come, the rugby landscape will only settle in 2023 at the next World Cup.

With rugby perennially preoccupied by four-year cycles from World Cup to World Cup, the demand to win in the short term, while balancing long-term prospects is relentless and jobs are offered and lost off the back of it; short-termism is at the sport’s core. Although we are still waiting to see who eventually lifts the Six Nations trophy late on Friday night, we are still none the wiser as to how five of these six teams will fare in the next World Cup in 2023, which will be held in France.

But let’s begin by looking at the short term and the resolution of this championship.

Scotland head to France with depleted personnel for the delayed final match of this Six Nations. The game was originally meant for round three but was postponed due to an outbreak of COVID-19 in the France ranks.

As this reorganised game falls outside the pre-defined international window, a lucrative deal with Premiership Rugby was struck to permit the release of five Scotsmen for Friday’s match. It’s frankly farcical Scotland are without winger Sean Maitland for this match, but that’s the way the sport works and Scotland’s defence of the high ball will be worse off without the Saracens back. So, Scotland go into this match with one arm tied behind their back for a match in which silverware is on the line.

France’s remarkable last-gasp win over Wales last Saturday — a victory which denied Wayne Pivac’s men their Grand Slam — means they still have a shot at the title come Friday evening.

Last Saturday Wales led France by 10 points with 10 minutes left on the clock. France were down to 14 men after Paul Willemse’s red card. Wales were then reduced to 13 men with two quickfire yellow cards and France rallied to score two tries — the last coming in the 83rd minute of the match.

That victory means Wales still sit atop of the championship rankings on 20 points, with France five behind, but Fabien Galthie’s side can catch them with a victory of at least 21 points and four tries in the process. More on Wales later, but if France win on Friday, they will immediately leap to the top of the European tree of World Cup favourites.

This group of French players are special; a batch of ludicrously talented players with the world’s best scrum-half Antoine Dupont pulling the strings like Geppetto in his workshop.

France are without the brilliant fly-half Matthieu Jalibert for Friday’s match, but they do have Romain Ntamack prepared to step in — who is a wonderful player in his own right — and having come on after 29 minutes against Wales and steered them home, that battle for the keys to No. 10 will be one to monitor from now through to the 2023 World Cup on French soil.

Should they do enough to win the championship on Friday, it’ll be their first since 2010 and proof that for the first time in the last decade, France have clear rugby identity and more importantly, depth. Though it seems this group are never far from implosion, if they can continue riding this wave for the next two years, they’ll take some stopping on home soil.

For Scotland they can look back at a championship where they started brilliantly with that win at Twickenham, but then it petered out.

Frustrating defeats to Wales and Ireland followed, where Scotland were their own worst enemy, but they still have one more monumental performance in them. Gregor Townsend, the Scotland boss, was relieved to have his five England-based players available, but he knows the importance of a win here as they hope to develop into a team capable of reaching the final throes of a World Cup.

They have a fearsome back-row, but are still fine-tuning their front-row and centres.

While Scotland face France, Wales will watch on nervously. They know the opportunity they missed last weekend, but this championship has been a stirring one for Pivac and his men.

Pivac went into the Six Nations under pressure, having endured a poor start to his Wales tenure having got the job in 2019 after Warren Gatland left. But Wales flew under the radar and slowly ticked off the matches to tee up the Grand Slam decider. Those ageless warriors like Alun Wyn Jones and Ken Owens were the team’s spine, but then they had the bright young stars like Louis Rees-Zammit and Callum Sheedy eating up turf and tries, and the more established heads like George North, Josh Navidi, Wyn Jones and Jon Davies all putting in big shifts. So this has been a championship of real progress for Pivac’s men.

Last Saturday also saw Ireland and England face off in Dublin. Andy Farrell’s Ireland had not beaten England in four; Eddie Jones’ England had just beaten France in a remarkable match, having lost two of their opening four matches. The balance of pressure was neatly split between them, but Ireland’s resounding 32-18 win suddenly saw the heat increase on Jones.

England looked off-colour against Ireland, but those in the corridors of power at the RFU will know the perils of knee-jerk decisions.

With England now heading into a review period looking back at a poor Six Nations campaign where they finished fifth, expect the inquest to be thorough, but ultimately for Jones to continue. Which is the right call.

These sorts of experiences make a World Cup side. For example, the Springboks from 2019 — two years prior in 2017 they were in an awful run of form, but Rassie Erasmus concocted the right formula and through they went to their third World Cup crown.

Jones will be looking for this championship to act as a similar fillip and may see the slow setting of the sun on some Test careers, and the chance for others to step in and shine. The talent coming through is inconceivable — just at scrum-half you have Harry Randall, Alex Mitchell, Raffi Quirke and Jack van Poortvliet, all with the potential to be 50-cap Test players. They were poor in this Six Nations and lacking in discipline. As a result, they will be under pressure to deliver in the autumn.

Ireland are now in a better place than where they started the championship. Tadhg Beirne is looking to be a player for the ages, while Johnny Sexton, Keith Earls and Conor Murray continue to defy Old Father Time, while keeping those younger chaps snapping at their heels at a distance.

The pressure on Andy Farrell has eased, and we’re starting to see what his Ireland team looks like: one with more than a dab of Joe Schmidt-esque about them, but with more license to play off unstructured play and with a brutally strong set piece. Their front-row looks solid, while they are still finding their perfect balance in the backs, there is the talent to trouble the best in the world.

Which brings us to Italy, the ugly duckling of this group. Their last Six Nations win was in 2015. It’s a grim statistic and with the new CVC investment in the tournament, they are going to be under increasing pressure to start delivering results or be shipped out (either in favour of Georgia, or perhaps closer ties with South Africa).

You can see how exasperated Franco Smith looks when his side concede try after try, but you can look at this in two ways: either it’s time to get rid and throw slow evolution to the wind, or you continue investing in this country with the hope they are moving away from base camp and up the mountain. Like their championship comrades, there are green shoots of younger players coming through, but they need to get results, and fast.

And then above all this are the British & Irish Lions, with their tour green lit to take place in South Africa this summer. Lions boss Gatland will name his squad at the start of May and there will be the usual intrigue around his selections. Captaincy now looks to be between Alun Wyn Jones, Ken Owens, Owen Farrell or Mario Itoje while there will be a mad scramble for places on the plane to South Africa.

Those in red and green, and a few in blue, will have advanced their claims while he’ll be keeping a close eye on England’s Saracens contingent to see how they fare in the RFU Championship. Big names will miss out, but Gatland has a good idea of his final touring party, with room for a couple of bolters.

Which brings us back to Friday night in Paris.

We’re meant to love Paris in the springtime, but it will be another eerie affair, played out against the backdrop of the French capital in lockdown.

The romance is lacking, but the significance is great. This is a game for the present and future; in a game of pressure, foresight and hindsight, the now still matters.

France will be going all out to win this Six Nations title, but wherever it ends up, it’ll give little indication of where the balance of power will lie in 2023. It all moves too quickly for that.