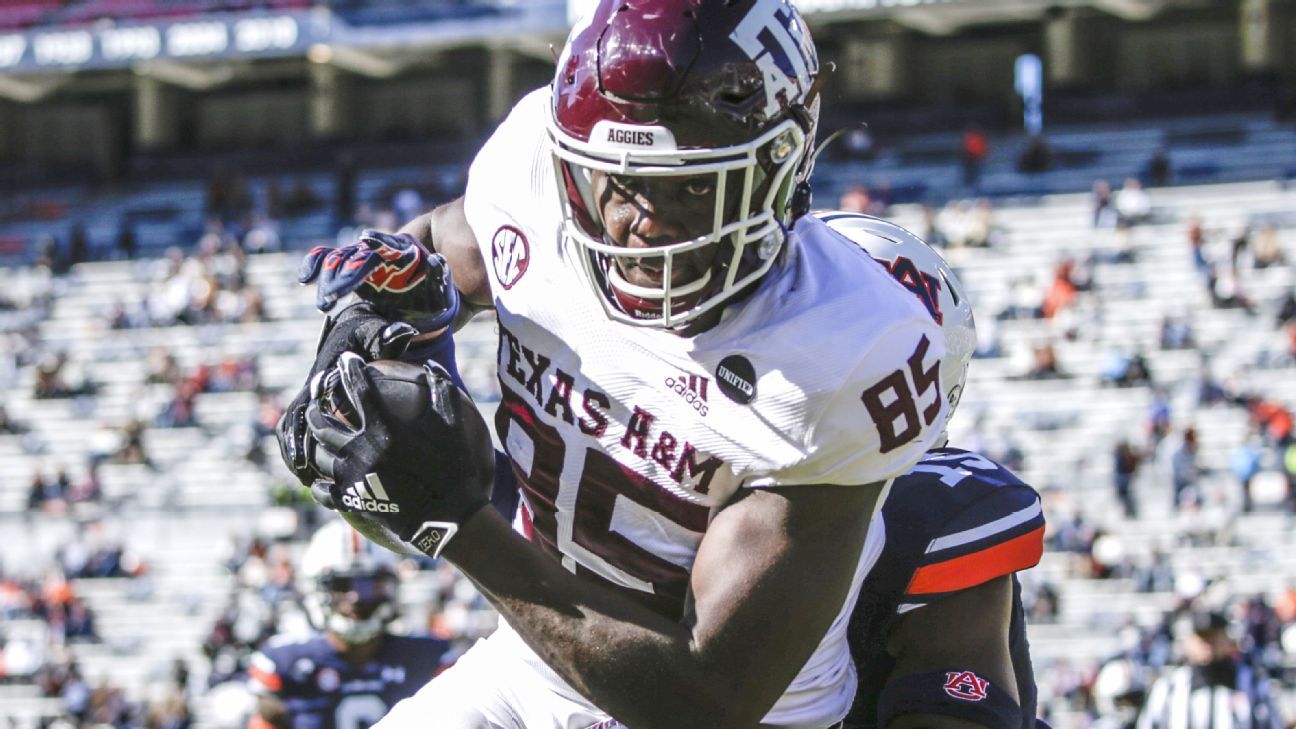 Texas A&M coach Jimbo Fisher said on Thursday that tight end Jalen Wydermyer, a Mackey Award finalist and key target for the Aggies last year as a sophomore, will miss this spring after cutting his hand in a “freak off-the-field accident.”

Fisher said the injury required surgery on a tendon.

“It’s all fine,” he said. “It’s got to get stretched out. He can’t take any hits or anything on it.”

After finishing No. 4 last season and just missing the College Football Playoff, A&M will open spring drills on Monday looking to find a replacement at quarterback for four-year starter Kellen Mond. Fisher said he’s been impressed by how all three candidates — sophomore Haynes King, redshirt sophomore Zach Calzada and freshman Eli Stowers — have processed the offense and and has learned to let quarterback competitions play out.

“From an intelligence standpoint, learning standpoint, I think all three of those guys I’m extremely pleased of (their) knowledge of what to do — not only pass game, but run game and also protections,” Fisher said. “I think all three guys have done an outstanding job in that regard. I’m really anxious to see these guys compete with spring.”

Fisher said wide receiver Caleb Chapman, who broke out last season with nine catches for 151 yards in the Aggies win over then-No. 5 Florida before injuring his knee on a 51-yard touchdown pass late in the game, will sit out the spring while finishing his rehab.

“He’ll be fully healthy by the end (of spring practice) so there’s no sense of that,” Fisher said. “So he won’t be in there.”

Sophomore wide receiver Demond Demas, who was a five-star recruit last season before appearing in three games, is awaiting a university disciplinary meeting after a Mar. 16 arrest by the Brazos County Sheriff’s Office on a charge of possession of less than two ounces of marijuana.

“They’ll have a meeting, which has nothing to do with us — it’s school procedure — and when that gets cleared up then he’ll be back in action with us,” Fisher said.

Devon Achane, the MVP of the Aggies’ Orange Bowl win over North Carolina, is also splitting time in the spring between football and track. Achane opened his track season with a win in the 200-meter race at the Willie Williams Classic in Tucson, Ariz. last weekend with a time of 20.76 seconds, which currently ranks second in the NCAA. He was named the SEC Track and Field Men’s Freshman of the Week.

Fisher said they hoped to keep Achane up to speed in football meetings, but won’t ask much of him on the field.

“If he’s having tons of success, we’re not gonna do anything that makes him not run well in the meet,” Fisher said. “It’s something that is very important to him and and he’s very good at.”