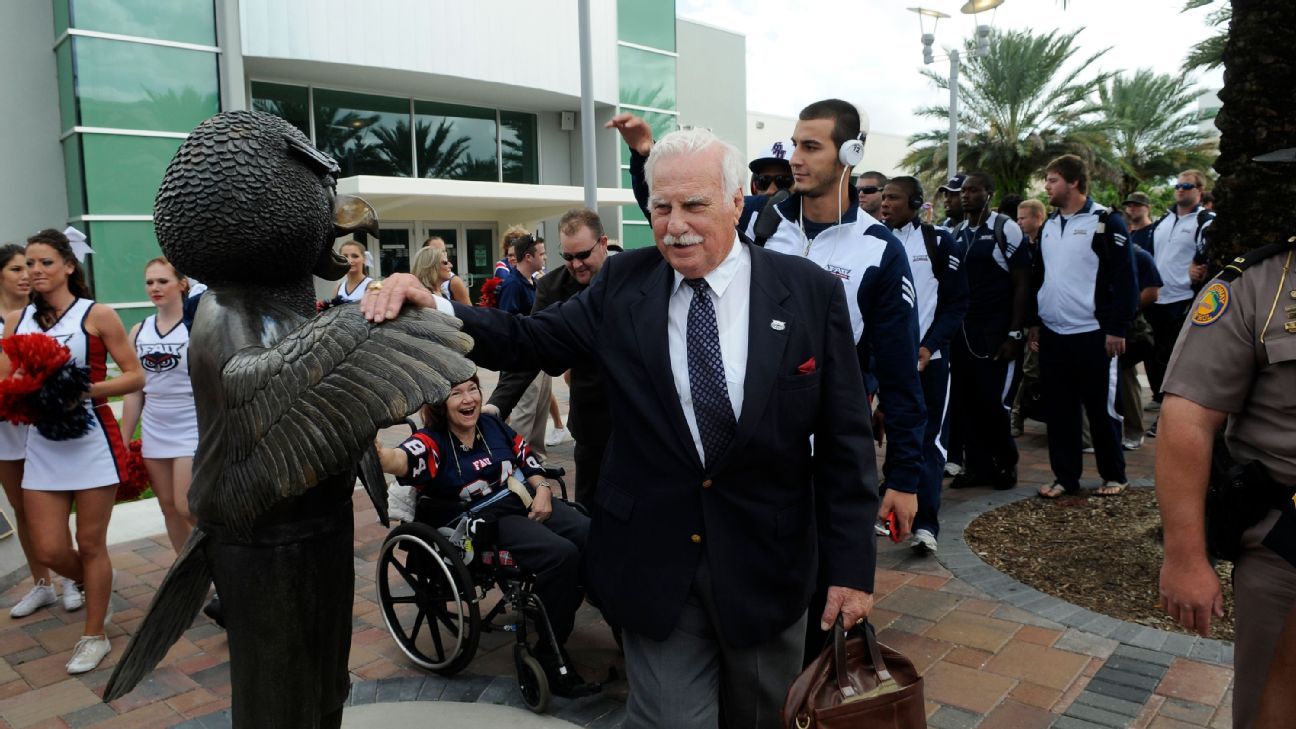 Howard Schnellenberger, who led Miami to its first national championship and in the process turned a once-floundering football program into a dynasty, died Saturday his family announced. He was 87.

What Schnellenberger did at Miami remains one of the greatest transformations in college football history. Before his arrival in 1979, Miami administrators considered dropping the sport as the losses mounted and morale dipped.

But after he helped deliver the 1983 national championship, Miami won three more national titles over the next six seasons. Though he was only there for the ’83 title, the speed and athleticism the Hurricanes first displayed under Schnellenberger became a blueprint for programs across the country.

His baritone voice, bushy mustache and ever-present pipe made him look more businessman than football coach, but it became as synonymous with Schnellenberger as his penchant for embracing reclamation projects.

He did that first with Miami, a job friends urged him to avoid because it looked like a dead end. Schnellenberger saw something else, and declared Miami would win a national championship within five years. He ratcheted up the discipline inside the program, and focused his recruiting efforts primarily on the untapped potential across South Florida, declaring the area the “State of Miami.”

It did not take long for Miami to climb to national relevance, culminating in the 1984 Orange Bowl against Nebraska, a game that ranks among the sport’s greatest upsets.

Miami went in as the underdog on its home field. But when Kenny Calhoun batted down Turner Gill’s 2-point conversion pass, the Hurricanes sealed the 31-30 upset and first national championship in school history.

In a post-game interview, Schnellenberger said, “This has been a love affair that’s been developing for five years, and tonight was the fulfillment of a dream. I say fulfillment. It might just be the beginning of a dream.”

It was, but Schnellenberger was not there to see it firsthand. Schnellenberger left the Hurricanes after that championship season to take a job with a USFL team planned for Miami. At the time, he told The Miami Herald he left because he felt constrained by Miami’s athletic budget, and he couldn’t pass up the $3 million contract offer.

But the team never materialized, and Schnellenberger ended up sitting out the 1984 football season.

In 2011, Schnellenberger said of leaving Miami, “If you look at it objectively, it was the dumbest thing a human being could do.”

But sitting out one year from coaching afforded him an opportunity to go home to Louisville, where he became head coach in 1985. He promised national championships there, too, and though he didn’t win any, he revitalized a program that was in worse shape than Miami was when he took over. During his 10 years as head coach, Louisville won a Fiesta Bowl and Schnellenberger spearheaded the construction of an on-campus stadium. The current football complex bears his name.

He left in 1995 to become head coach at Oklahoma, another decision he came to regret. After one miserable season going 5-5-1, Schnellenberger resigned under pressure.

Schnellenberger would get one more opportunity to coach, in the state where he made his name. In 1998, a commuter school in Boca Raton, Florida, wanted to start a football program. Schnellenberger was chosen as Florida Atlantic director of football operations, and later decided to coach the team. He had a fast-track vision for the Owls: after three years spent on the FCS level, they would become an FBS program.

By now, he had ditched the pipe for health reasons, but still wore his trademark sports coat, suspenders and tie on the sideline. During his time as head coach, FAU went to two bowl games, and he got an on-campus stadium built there, too. When he retired in 2011, Schnellenberger had compiled a 158-151-3 record. The field at the stadium bears his name as well.

His resume includes not only championship rings (three won as an assistant at Alabama, one with the 1972 undefeated Miami Dolphins, and one with 1983 Miami) but the quarterbacks he coached or recruited. As an Alabama assistant in 1962, Schnellenberger convinced top recruit Joe Namath to sign with the Tide out of Beaver Falls, Pennsylvania.

With the Hurricanes, he coached Jim Kelly, Bernie Kosar and Vinny Testaverde, the foundation for the “Quarterback U” moniker Miami once owned.

Then there are the coaches he learned from. Schnellenberger played for Paul “Bear” Bryant at Kentucky and later coached with him at Alabama; he also coached under NFL Hall of Famers George Allen and Don Shula. Schnellenberger did have his shot as an NFL head coach, leaving the Dolphins after the 1972 season to take over the Baltimore Colts. But his tenure lasted 17 games — he was fired after a dispute with the owner following an 0-3 start in 1974.

Schnellenberger was born March 16, 1934, in Louisville, and played tight end at Kentucky from 1952-55, earning All-America honors his senior year. After a short stint in the CFL, he began his coaching career at his alma mater before joining Bryant at Alabama.

After he retired from FAU, he served as an ambassador for the school and stayed in the South Florida area. When Miami and FAU played against each other for the first time in 2013, Schnellenberger was made the honorary co-captain.

Survivors include his wife Beverlee, sons Stuart and Tim and three grandchildren. He was preceded in death by his son, Stephen.