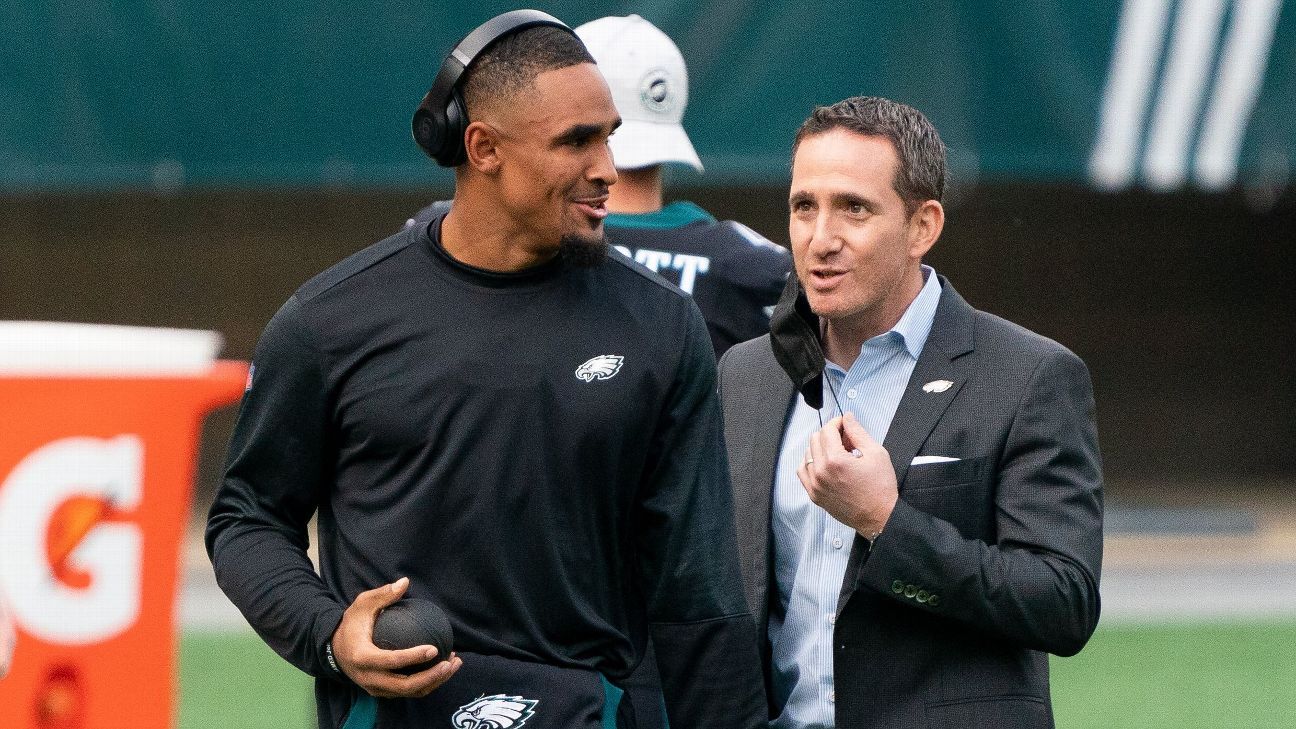 PHILADELPHIA — Any dreams fans had of tight end Kyle Pitts or wide receiver Ja’Marr Chase running out of the Lincoln Financial Field tunnel in a Philadelphia Eagles uniform likely went up in smoke Friday when the Eagles traded the No. 6 pick in the 2021 NFL draft along with a 2021 fifth-round pick (No. 156) to the Miami Dolphins for the No. 12 pick, a fourth-round pick (No. 123) and a 2022 first-round pick.

The risk here is obvious: The Eagles are passing up the chance to snag a blue-chip playmaker, and it could come back to haunt them. This is a unique year in which a quarterback could be selected with each of the first four picks in the draft, pushing some serious talent down the board in the process. That makes the No. 6 slot pretty desirable. The Dolphins sure thought so.

Why pass up on such an opportunity?

It gives the Eagles options.

The Eagles, who finished 4-11-1 and in last place in the NFC East last season, are stacking up resources as they move further away from their aging 2017 Super Bowl squad and transition into a new era under coach Nick Sirianni. They will now have as many as three first-round picks in the 2022 draft, depending on how much quarterback Carson Wentz plays for the Indianapolis Colts this season. Philadelphia received a conditional second-round pick from the Colts when it traded Wentz to Indianapolis that becomes a first-round pick if Wentz plays 75% of the offensive snaps, or if he plays 70% of the snaps and Indianapolis makes the playoffs this season.

Having so many quality picks allows the Eagles flexibility to go in a number of directions.

If second-year quarterback Jalen Hurts thrives this season, the Eagles can use those assets to build up the team around him. If he doesn’t match expectations, they could package those picks in the 2022 draft to move up and select their quarterback of the future.

They should be able to get a good player with the No. 12 overall pick — there’s a thought Alabama wide receiver DeVonta Smith might slide further than initially expected, for example — and if there’s a player they’re hot after, they could always pull from their cache of picks to move up a couple of slots to land him. They could also target offensive line or one of the top cornerbacks at No. 12, according to ESPN draft analyst Mel Kiper Jr.

There are also a couple of marquee quarterbacks who could be dealt this offseason in Houston’s Deshaun Watson and Seattle’s Russell Wilson. The more capital a team has, the better chance of landing a quarterback, if that proves to be the desired course. The same could be said for next year if a franchise quarterback becomes available and the Eagles want to pursue.

Bottom line, the Eagles believe this move to trade down to the No. 12 spot in the 2021 draft puts them in a better position to build the team moving forward.

Time will tell if they have calculated correctly.