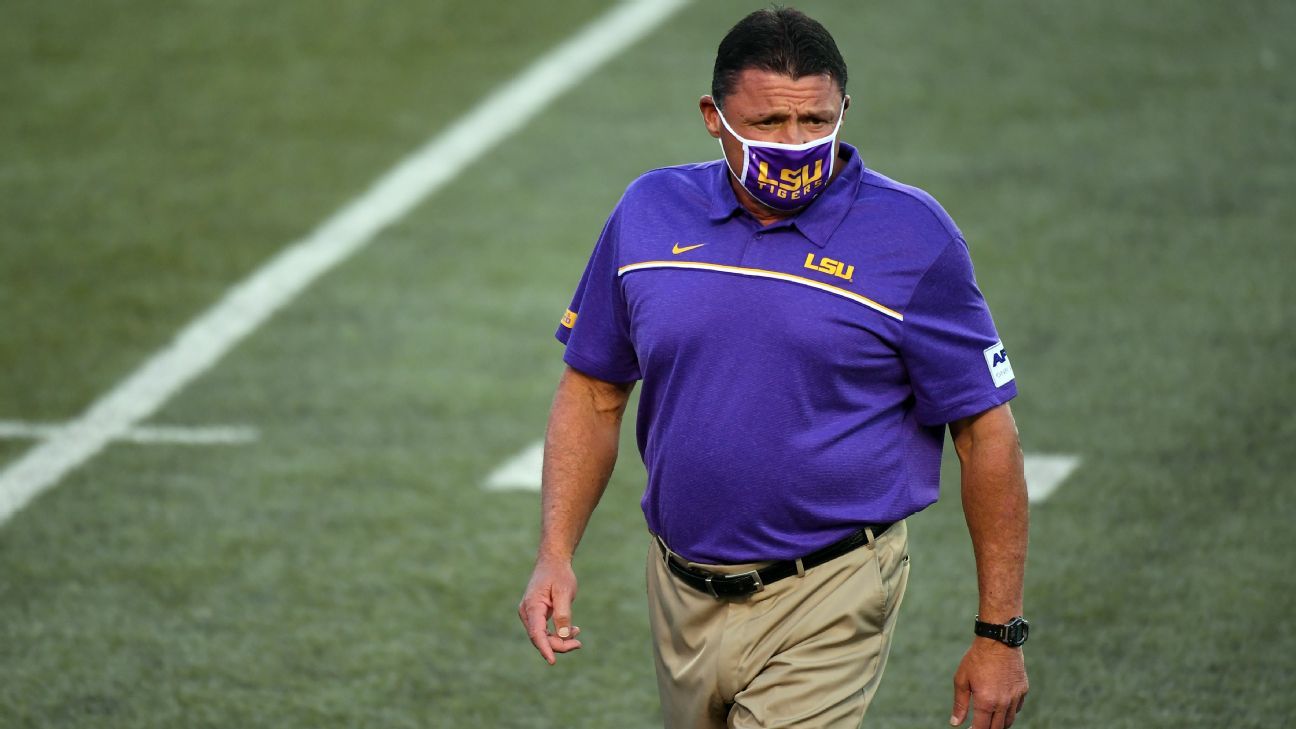 BATON ROUGE, La. — A 74-year-old woman told state lawmakers Friday that she spoke directly to LSU football coach Ed Orgeron about sexual harassment she allegedly endured in 2017 from one of his star players, adding he did nothing to reprimand the running back.

Gloria Scott, a security worker at the Superdome in New Orleans, said then-LSU player Derrius Guice walked up to her with his friends at an event and told her: “I like having sex with older women like you” and “I want your body,” among other vulgarities while rubbing his body.

“I have never felt so embarrassed,” Scott, who is a grandmother, told lawmakers during an appearance in which she broke down at times in tears.

Scott said she called LSU about the player and eventually received a return phone call from Orgeron, who she said offered to put Guice on the phone to apologize. Scott said Orgeron asked her to “please forgive [Guice] because he’s a troubled child.”

Scott said she refused to speak to the player and urged Orgeron and other LSU athletic officials to keep Guice out of an upcoming bowl game as discipline — a request that wasn’t fulfilled. After the call, Scott said she never heard from Orgeron again.

Orgeron denies ever speaking with Scott.

Her testimony came at the second hearing called by female state lawmakers who are following up on an independent report that determined LSU for years mishandled its response to student allegations of rape, domestic violence and assault, in some instances ignoring the claims entirely.

Orgeron told Husch Blackwell in an interview that he didn’t speak with Scott but was told about the harassment allegations. Athletic department spokesperson Michael Bonnette repeated that denial in a statement Friday.

“Coach Orgeron never had any direct communications with the complainant. He has and will continue to follow university protocols regarding reporting,” Bonnette said.

Lawmakers said they believed Scott and wanted to hear directly from Orgeron, known in Louisiana as Coach O, at a future hearing.

“Coach O has to answer to us,” said Rep. Aimee Adatto Freeman, a New Orleans Democrat whose daughter attends LSU.

LSU lawyer Winston DeCuir said university officials will speak both to Scott, who had previously not identified herself publicly, and Orgeron.

“And if he lied?” asked Sen. Karen Carter Peterson, a New Orleans Democrat.

“If he lied, we’ll deal with Coach O,” DeCuir replied.

Guice was accused of rape when he was a player at LSU, but university officials never investigated the accusations and Guice was never disciplined, according to the Husch Blackwell report. Guice was released from the NFL’s Washington Football Team in August after his arrest for domestic violence charges. He has denied all the allegations, including claims of sexual misconduct at LSU, through his attorney.

The Associated Press doesn’t usually name people alleging they were victims of sexual misconduct, but Scott testified publicly and identified herself to the joint House and Senate committee reviewing the LSU report.

Scott told the lawmakers she spoke to multiple people in the LSU athletic department about the December 2017 incident, including two people have received short-term suspensions after being identified in the report as mishandling allegations of sexual misconduct. Scott said she also went to the police seeking to file charges and reported the harassment to Superdome management.

No one took action against Guice, she said.

“I had to come here today and let you know that LSU hides a lot of things,” Scott said, crying. “He scarred me.”

Lawmakers, who are pushing for stronger disciplinary actions from LSU, continued to express anger about the university’s response and grilled university officials after Scott’s testimony.

“I am really trying to keep myself composed here, but I am just outraged,” said Sen. Regina Barrow, the Baton Rouge Democrat who chairs the committee.

“We are going to take action,” she said. “This is not just a show here.”

Former football coach Les Miles was pushed out of his coaching job at Kansas after the report detailed allegations of inappropriate behavior with students during his tenure at LSU.

Ex-LSU system president F. King Alexander resigned from his job leading Oregon State because of his role in the mishandling of sexual misconduct cases at LSU. Oregon State officials said Alexander wouldn’t be able to rebuild trust with their university community.