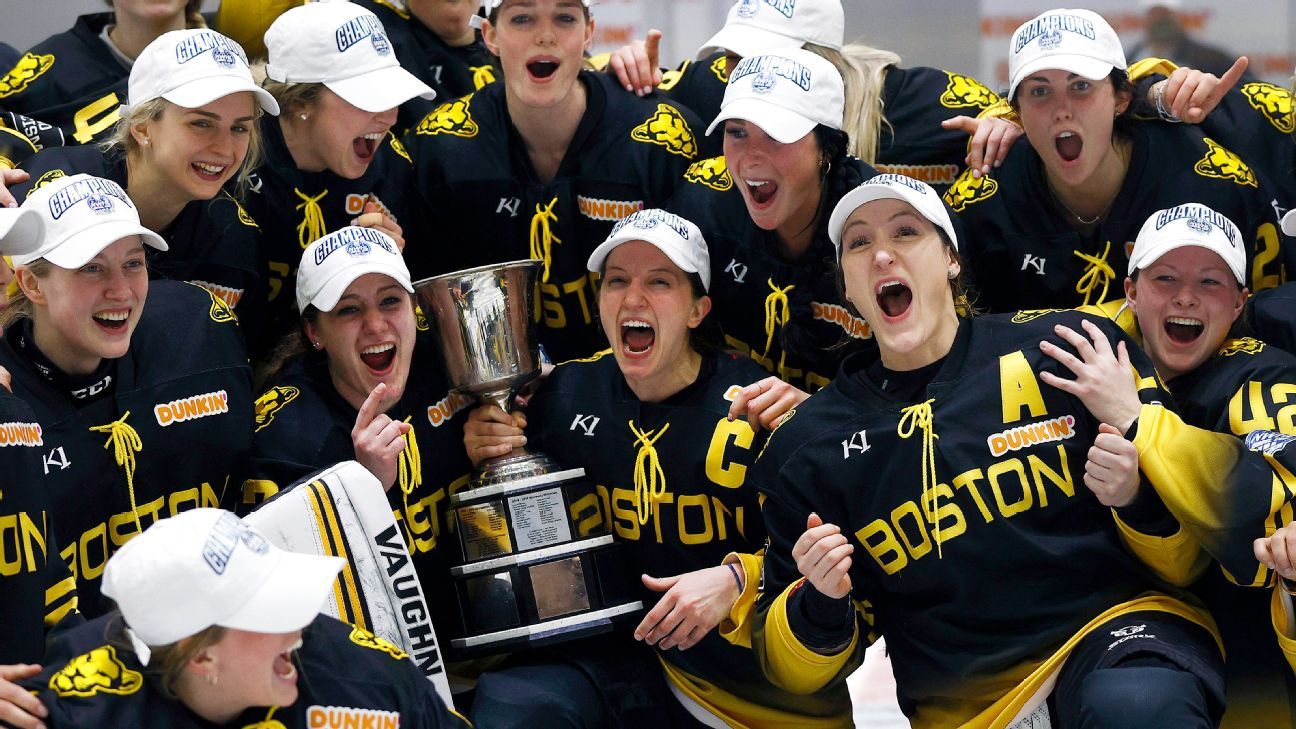 BOSTON — Lexie Laing and Taylor Wenczkowski scored power-play goals, and the Boston Pride became the first two-time winners of the Isobel Cup with a 4-3 win over the defending champion Minnesota Whitecaps on Saturday night.

It was an NWHL championship the Pride, who were regular-season champions, had hoped to win a year earlier, before the COVID-19 pandemic forced the cancellation of the championship game between these same two teams just two days before the faceoff.

Wenczkowski’s goal, which made it 4-2 with 6 minutes, 28 seconds to play, proved to be the game winner as it came down to a frantic finish.

Boston’s Tereza Vanisova was called for a five-minute checking-from-behind major with 2:25 left. The Whitecaps pulled goalie Amanda Leveille at the same time but didn’t score on the 6-on-4 until just 19.4 seconds remained, with Meaghan Pezon stuffing the puck during a scramble.

But Boston, which dominated the faceoffs 39-18, won the last draw thanks to Laing, and the Pride had their first championship since the inaugural season of 2015-16.

“We finally did it and I’m so proud of our team,” Boston captain and Cup MVP Jillian Dempsey, the only player from the first championship, said. “Huge congratulations to Minnesota, too. They really made that a battle until the very last second.”

After Allie Thunstrom gave Minnesota a 1-0 lead in the first period, the Pride score three goals in the second period. Mary Parker tied the game, Dempsey found the far top corner from the bottom of the circle and then Laing cashed in a 5-on-3 power play.

With 12:21 to play in the third period, the Pride had pressure on the goal when defenseman Amanda Boulier was called for covering up the puck in the crease. Boston was given a choice of a penalty shot or power play and elected to give Tori Sullivan the penalty shot that Leveille stopped.

Just 13 seconds later, Thunstrom scored her second goal, fourth of the weekend, to make it 3-2 and set up the frantic finish.

“[The finish] felt like the longest 19 seconds of my life,” Boston defenseman Kaleigh Fratkin, who has played in the NWHL since the inception, said. “Lexie Laing has been an amazing center for us. She won the draw, and Lauren Kelly has been unbelievable for us this year on the D-end — she sent the puck down and killed it. Man, a great way to bring home the last 19 seconds.”

Even the abbreviated season, played in a bubble in Lake Placid, New York, was shut down in early February, with the six teams playing between three and seven games and the four playoff teams not playing since early February.

Fourth-seeded Boston reached the championship game with a 6-2 win over top-seeded Toronto (4-1-1) in the semifinals with six different players scoring. Minnesota routed 2-2 Connecticut 7-0 behind a hat trick by Audra Richards and two goals from Thunstrom.