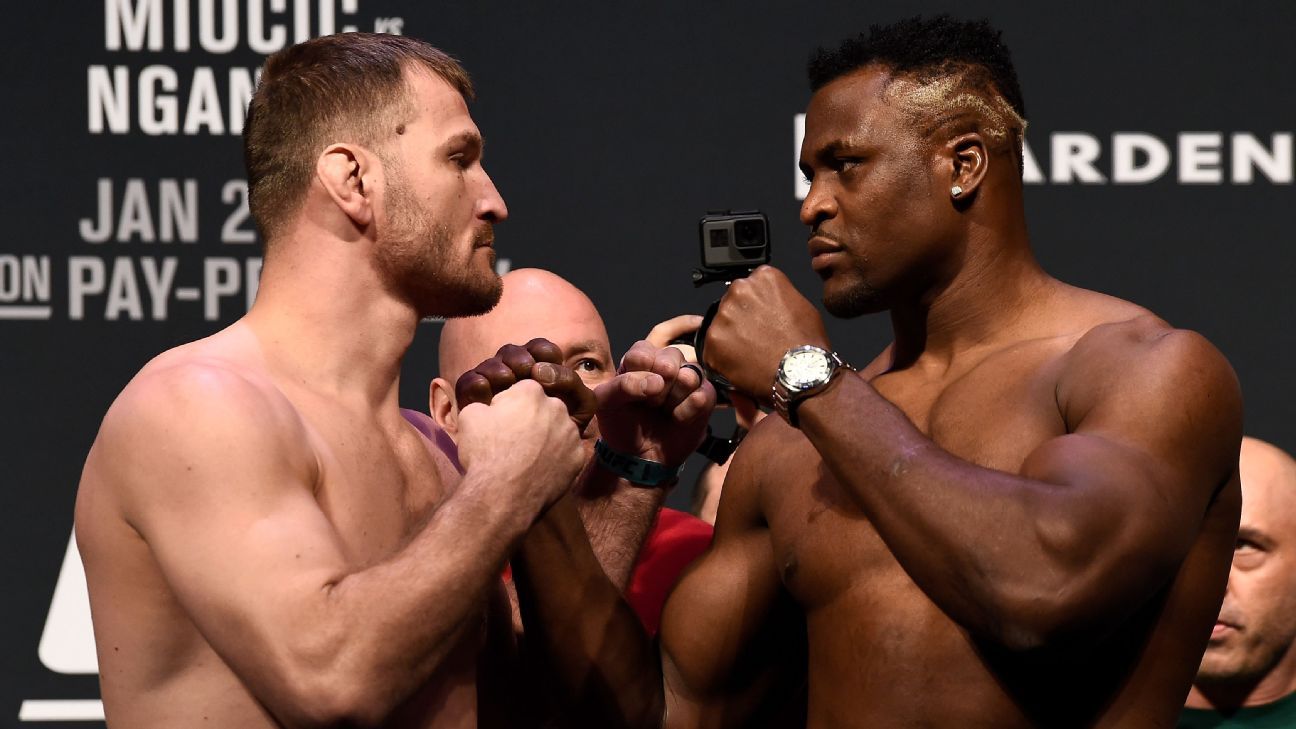 LAS VEGAS — From most feared to undisputed best, the Francis Ngannou era has begun.

Ngannou knocked out Stipe Miocic to win the UFC heavyweight title Saturday night at the UFC Apex. The finish came at 52 seconds of the second round.

Ngannou dropped Miocic with a left hand, and, after Miocic seemed to recover, he landed a combination and big punch on the ground to put Miocic out. Miocic had not been knocked out since 2012.

This was a rematch of a bout that Miocic won in fairly one-sided fashion over via unanimous decision at UFC 220 on Jan. 20, 2018.

Coming in, Miocic was atop ESPN’s heavyweight rankings with Ngannou at No. 2. ESPN had Miocic ranked No. 3 in the world pound-for-pound. Ngannou won the title by finishing a man who many, including UFC president Dana White, feel is the best heavyweight fighter in MMA history.

UFC 260 took place with COVID-19 protocols in effect at the UFC Apex, a facility across from the promotion’s corporate campus. The card could be the last UFC pay-per-view event to take place at the Apex without fans with the promotion going back to full arenas beginning with UFC 261 on April 24.

Ngannou (12-3) is perhaps the most dangerous knockout artist in UFC history. The Cameroon native, who lives and trains in Las Vegas, has won five in a row, all by first-round KO/TKO. In those last four bouts coming into Saturday, the 34-year-old Ngannou had stopped his opponents in 72 seconds or less. He has eight first-round finishes in 10 UFC wins.

Miocic (20-4) is considered by many the best heavyweight champion in UFC history. The Ohio native, who still works part-time as a firefighter and EMT, has the most successful UFC heavyweight title defenses (4) ever, which is double the next men in that category.

Miocic, 38, was coming off a unanimous decision victory over Daniel Cormier in a trilogy bout at UFC 242 last August. He owns wins over former UFC heavyweight champs Cormier (twice), Junior dos Santos, Fabricio Werdum and Andrei Arlovski. The only defeat he has not avenged in his career came against Stefan Struve in 2012, the lone knockout defeat of his career until Saturday night.