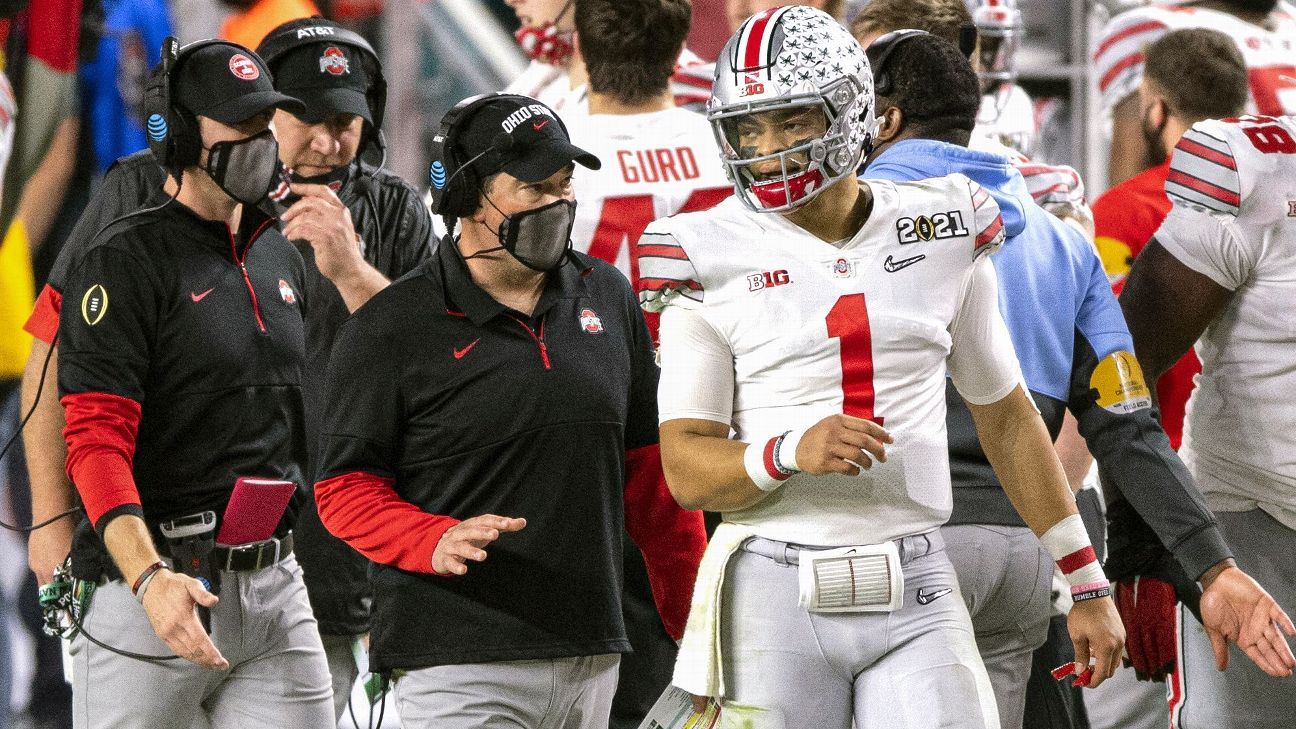 Ohio State coach Ryan Day thinks quarterback Justin Fields “checks all the boxes” as an NFL prospect and will become a franchise player for the team that drafts him next month.

Fields, who started the past two seasons for Day at Ohio State, goes through his pro day workout Tuesday in Columbus, Ohio. The 6-foot-3, 228-pound Fields passed for 5,373 yards, 63 touchdowns and nine interceptions as a Buckeye after starting his career at Georgia in 2018.

ESPN’s Mel Kiper last week projected Fields to go No. 3 overall in the draft to the Carolina Panthers, after fellow quarterbacks Trevor Lawrence and Zach Wilson. Kiper’s mock draft was published before the San Francisco 49ers traded up to the No. 3 spot.

“Whatever they teach in terms of a scheme, he’s going to pick that up very, very quickly,” Day said Monday. “And he’s very, very competitive. So when you combine the talent, the size, the arm strength, his competitiveness, his toughness, his intelligence, it kind of checks all the boxes. If you were trying to design a quarterback, to me, Justin fits that prototype.”

Day noted that Fields didn’t play four years of college football and should have an even higher ceiling in the NFL. Fields is set to become the second Ohio State quarterback drafted in the first round in the past three seasons, after the program had none between Art Schlichter in 1982 and Dwayne Haskins in 2019.

“Whether he’s ready-made to be the No. 1 pick in the NFL draft, that’s up to them, every team has to make their own decision,” Day said of Fields. “But I know this: Everything you invest in that kid, you’re going to get back. It’s just a matter of the fit.

“Someone’s going to take a shot at him here early in the draft and they’re going to have a franchise quarterback for a long time.”

Both Stroud and Miller were ESPN 300 recruits in 2020, while McCord, who enrolled early, is ESPN’s No. 31 overall player in the 2021 class. Day noted that the starting job won’t be claimed on one day, and the process of selecting the top quarterback could even spill over into the season.

“I’d love to sit here and tell you that I think we’ll have a great feel for it in two weeks or three weeks or in the fifth practice of preseason, but I don’t think so,” Day said. “The more we’re around them, the more we get a feel for it, the more it shakes out. But even going into that first game, you’ll still be learning and trying to evaluate it all.”