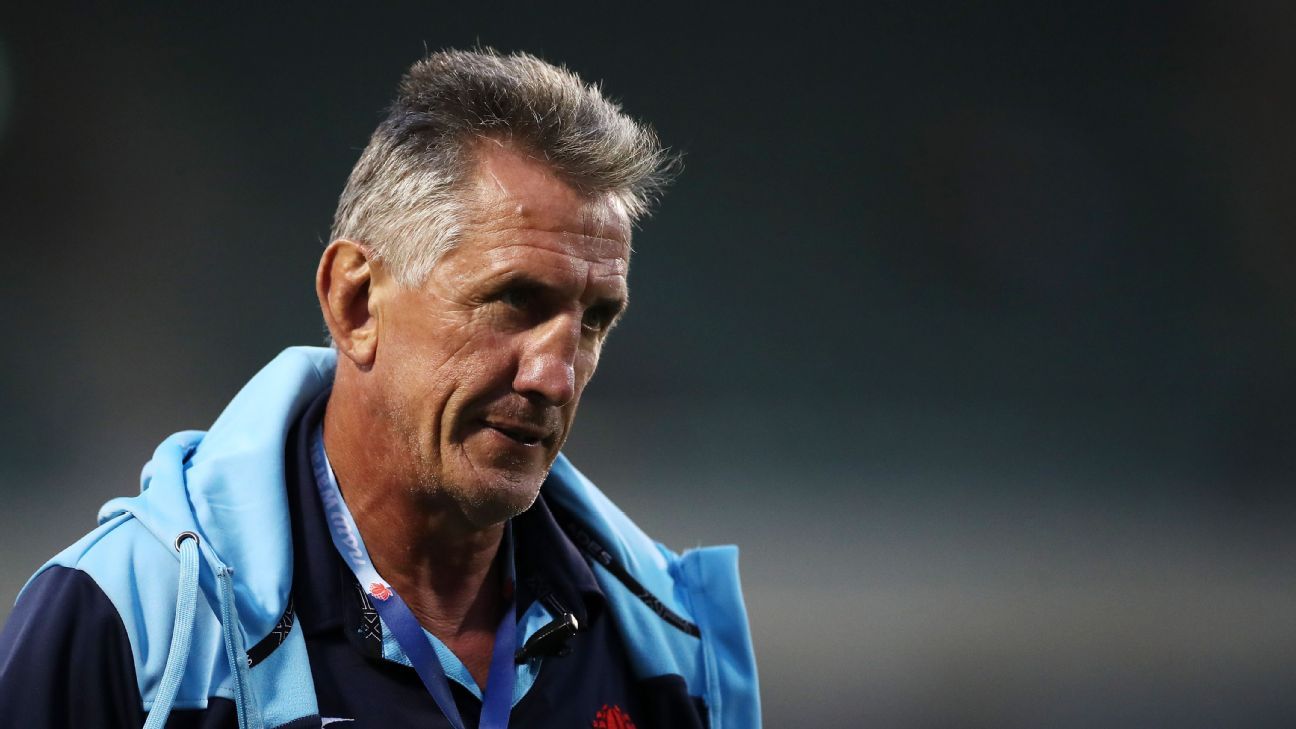 Another weekend of Super Rugby is in the books and there were plenty of fireworks in Australia and New Zealand.

falling to their fifth straight defeat, Rob Penney was given the boot late on Sunday night ending a failed 18 month tenure at the club.

It’s a similar story in New Zealand with an embarrassment of fullback talent all raising their hands for All Blacks selection.

PENNEY FINALLY DROPS AT TAHS, THE BOARD MUST FOLLOW

A five game winless streak, three record losses and an inexperienced squad, something had to give at the Waratahs and unfortunately for coach Rob Penney that meant it was time for him to step away.

Signing a three-year deal starting in 2020, Penney’s contract was torn up with more than 18 months left, with the NSW Rugby Board acknowledging Penney had an “inexperienced roster”, but following match reviews, they weren’t convinced “there was enough significant improvement in the team to have him continue in the role”.

Perhaps the writing was on the wall before the season had kicked off with one report suggesting Penney was facing the sack if the Tahs didn’t win their final match of 2020, while several former players – including Jed Holloway and Tom Robertson — hit out at a flagging culture at the club.

The decision wouldn’t have come as much of a surprise for Waratahs fans, following a 46-14 loss to the Reds the night before at Stadium Australia, but it still received plenty of criticism. Hundreds of comments flooded the team’s social media pages, it wasn’t Penney they wanted to see go, instead the contempt was thrown towards the NSW board who they believe had put the club in this situation over the past five years through mismanagement.

Former Waratahs wing Drew Mitchell even weighed in on Twitter.

Any word from Hore, Rapp & any other administrators of recent times?

The coach was never the biggest issue..

Just a case of making a decision to make it look like something is being done imo.. https://t.co/6kGJbJ1E5J

In 2016, the Tahs boasted a roster featuring Sekope Kepu, Tolu Latu, Ned Hanigan, Dean Mumm, Will Skelton, Michael Hooper, Nick Phipps, Bernard Foley, Israel Folau, Rob Horne and Taqele Naiyaravoro. They went on to finish 16th of 18 teams, while coach Daryl Gibson would keep his job and also earn an extension. In the years following all 11 of those players have left the side.

Since his tenure began, Penney has seen the last of his most experienced players leave the side including Rob Simmons, Kurtley Beale and now Jack Dempsey announcing his departure at the end of 2021. It only further brings into question the board’s decision not to spend the entirety of their salary cap.

Only hours after he was given the call on Sunday morning Penney told Sydney Morning Herald journalist Tom Decent: “my only comment at this point is I was desperate to stay and be part of the rebuild”. One can only feel sorry that such a coach with proven results would be thrown under the bus 18 months after he took on the role.

The board’s decision to rely on young, inexperienced players should have at least bought him some time, he is after all not a miracle worker, and it did afford him some leniency from Tahs fans. But while many were expecting a hard year, the size of the losses was surprising and eventually culminated in a board meeting just three weekends ago. At the time Penney came away with the “full support of the board” almost certainly the kiss of death for any coaching job. Two weeks later he was shown the door.

In the end, Penney’s position was simply untenable. The record results were against him, while only four players were selected in the Wallabies squad – again not surprising, but a horrible result for a franchise that consistently pushes for majority numbers – but the buck can’t just stop at Penney, the board must follow out the door.

With just four Waratahs players and three from the Western Force named in Dave Rennie’s first Wallabies squad for 2021, it’s no surprise the Queensland Reds and Brumbies make up the bulk of the 40-man squad, with some of Super Rugby AU’s most exciting young players finding their place.

Naming 14 uncapped players for next month’s training camp and an average age of just 25, Rennie told media his squad was a reflection of current Super Rugby AU form and a look towards the future. It’s a massive step forward for Australian rugby and a huge opportunity for Australia’s best young talent to step up and claim their place.

It’s a follow on from last year’s theme when Rennie named 16 uncapped players, with 10 going on to make their test debuts.

There were no surprises when the likes of Andy Muirhead, Seru Uru and Len Ikitau were named. Their performances this year have been headline grabbing and have lit up the Super Rugby AU competition. Their selections are a reflection of the hard work and rich talent Australia has.

Ikitau was named in last year’s squad after just five appearances for the Brumbies off the bench, but since moving into the starting outside centre position, he’s taken his game to a new level. You need only watch Friday night’s performance against the Force where he scored a double alongside running 33 meters. Teammate Muirhead scored a double of his own and has finally been rewarded for his domination on the right wing over the last two seasons.

Uru was another who has made every minute with the Reds count. His domination and form deserved selection after he was equal most linebreaks by a forward in Super Rugby AU before the weekend. His performance against the Tahs on Saturday would have no doubt sealed his place after he made 11 tackles and monstered the breakdown.

The trio were named alongside talented youngsters like Feleti Kaitu’u, Angus Bell, Lachlan Lonergan, Darcy Swain, Tim Anstee and Josh Kemeny. Throw them in alongside some of last year’s squad such as Pone Fa’amausili, Trevor Hosea, Lachie Swinton, Fraser McRight and Tate McDermott, and Wallabies fans have a right to feel excited for the future.

Their selections have come at a cost for some of Australia’s most experienced players though, with Scott Sio and Folau Fainga’a both missing selection. While they have been hindered by injury so far this season, their non-selection proves that you can’t rest on your laurels and there’s plenty of test spots of for grabs for those who consistently perform.

FABULOUS FULLBACKS FRONT UP FOR FOSTER

The All Blacks have depth in most positions but the array of options coach Ian Foster will have to choose from at fullback this year, all of whom are in excellent form, really is something else.

It is not exactly a new development but with Beauden Barrett away in Japan, and the incumbent custodian having confirmed his preference is still to play No. 10 at Test level, there is perhaps a sense that this is the year that the two-playmaker system is shelved – or at least there is the belief that Super Rugby Aotearoa form should be rewarded.

Certainly both Jordie Barrett and Damian McKenzie could be doing little more to stake a claim for the All Blacks No. 15 jersey and then, gazing a little further ahead, Warriors skipper Roger Tuivasa-Sheck is also in tremendous form in the NRL. Tuivasa-Sheck will switch to rugby after the 2021 NRL season is complete.

Let’s start with Jordie Barrett, though. The Hurricanes fullback was simply brilliant in scoring all of his side’s points in the impressive 30-19 victory away to the Highlanders in Dunedin. Barrett was tremendous in every facet of the game as he both created and then finished three tries, kicked long range penalties and also saved the Hurricanes 10 points with desperate try-saving efforts on both Shannon Frizell and Freedom Vahaakolo.

While he is not interested in a switch to the Hurricanes’ troublesome No. 10 role, Barrett is moving between fullback and a bona fide playmaker in the front line as shown in the second of his three tries when he first shifted the ball back inside to Salesi Rayasi, stayed alive in support, and then received the ball back from his winger to cross under the posts.

Barrett could have done little more to ensure the Hurricanes got the four points and he was rightly honoured for an incredible all-round performance with the man-of-the-match award.

He has, howeve,r predominantly been used on the wing so far at Test level because of Foster’s desire to build the twin-playmaker system with Richie Mo’unga and Beauden Barrett. Given he has been playing at No. 10 for Suntory Sungoliath in Japan, Beauden Barrett might not necessarily be ready for the rigors of Test rugby when he does return from Asia.

That could present the situation where Jordie or perhaps Damian McKenzie could start in the Tests before the Rugby Championship, after the Chiefs dynamo produced yet another excellent performance in his side’s last-gasp win over the Blues.

Bouncing away from three defenders to score the match-winner, McKenzie ensured the Chiefs went back-to-back just when it seemed like the Blues would scrape over the line.

McKenzie has been shifting into the fly-half role late in games with great effect and again that was the case against the Blues in Hamilton.

Just how Foster and his fellow All Blacks selectors settle on their fullback will depend on whether they remained tied to the two-playmaker system, as New Zealand have been since the middle of 2019. But they are certainly blessed with an array of fullback options – not discounting David Havili either despite his impressive switch to inside centre for the Crusaders – for the run to the next World Cup.

And we haven’t even mentioned Will Jordan! Talk about an embarrassment of riches.