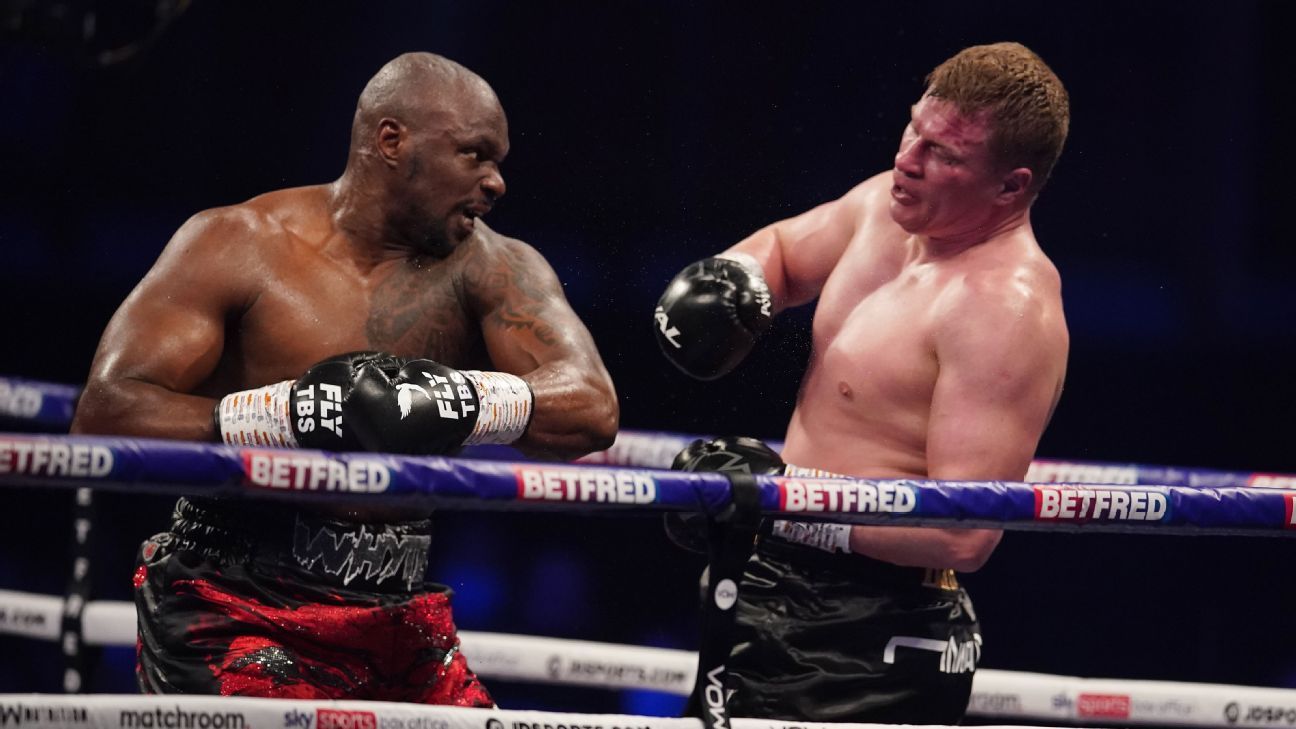 Seven months after a shocking loss, Dillian Whyte got his revenge against Alexander Povetkin with an impressive fourth-round TKO victory. And while Whyte said afterward he would welcome a trilogy fight against Povetkin, is it really necessary? Wouldn’t it be better for Whyte to keep moving forward and step up to face former champs Deontay Wilder or Andy Ruiz Jr. next?

This Saturday, junior lightweight world titlist Jamel Herring faces Carl Frampton in what might be the toughest opponent of his career. Is Herring ready?

Looking ahead, former lightweight champion Vasiliy Lomachenko returns for the first time since losing his championship to Teofimo Lopez in October. He’ll face Masayoshi Nakatani, but is that a smart move by Lomachenko after undergoing shoulder surgery? In other lightweight action, WBC interim champion Ryan Garcia will face No. 2 contender Javier Fortuna. Is that the right step up for the rising talent?

Real or not: A Dillian Whyte-Alexander Povetkin trilogy is the best option for Whyte’s next fight

Parkinson: Not real. Despite two entertaining knockout finishes and even though Whyte said he would take a third fight with Povetkin, there’s no need after he repaired the damage of August’s shock knockout loss to Povetkin. At 41, Povetkin still has one-punch knockout power, and he is a risk Whyte doesn’t need at this pivotal time of his career.

But what Whyte does while he waits for a shot at the WBC title to become available is a bit of a problem. Whyte needs to stay active, but after being in pole position with the WBC for so long without a title shot (almost four years), he doesn’t want to blow it again. With Whyte’s English rivals Tyson Fury (the WBC champion) and Anthony Joshua (the WBA, IBF and WBO champion) announcing a two-fight deal to crown the undisputed champion, Whyte will be kept waiting for a title shot until 2022.

Who does he face in the interim? It’s unclear what former titlist Deontay Wilder’s next move is. Former undisputed world cruiserweight champion Oleksandr Usyk is in talks with Joe Joyce about a fight, with the winner expected to fight for the WBO belt later down the line. Andy Ruiz Jr., who beat Joshua for the belts only to pile on weight and lose them in a rematch, is due to face Chris Arreola on May 1 and could emerge as an opponent for Whyte later this year. But if Whyte fights again in the summer, it should be against a lower-ranked opponent.

Whyte has the firepower to mix it with the best: He hurt Joshua in their 2015 bout before Joshua won by seventh-round TKO. But Whyte needs to show a bit more — perhaps beat someone like Ruiz just as he did Povektin — before more people start considering him a real danger to the elite fighters in the division.

Real or not: Jamel Herring will be the best junior lightweight in the division if he beats Carl Frampton

Parkinson: Not real. If Herring beats Frampton, it’s the best win of his career, and the former U.S. Marine would at least climb a place from No. 4 in the latest ESPN divisional rankings to No. 3. Frampton is new to the weight class, and Herring must defeat other, more established 130-pound fighters to claim the top spot.

WBA junior lightweight champion Gervonta Davis is perhaps staying at lightweight, after he knocked out Leo Santa Cruz in October 2020 for the WBA lightweight title. But that still leaves Oscar Valdez, the WBC champion, ahead of Herring regardless of what Herring does against Frampton. Valdez (29-0, 23 KOs) secured the top spot in the division with a 10th-round knockout of Miguel Berchelt in February. It was an impressive win for Valdez, as Berchelt had been champion for four years, and the victory made Valdez the man to beat at junior lightweight.

It would take a really impressive victory over Frampton to even elevate Herring to No. 2, after Joseph “Jo Jo” Diaz (31-1-1, 15 KOs) lost the IBF belt on the scales before a majority draw with Shavkatdzhon Rakhimov in February.

Real or not: Masayoshi Nakatani is a bad matchup for Vasiliy Lomachenko’s return

Baby: Not real. This shouldn’t be a big risk for someone like Lomachenko. Lomachenko was considered one of the world’s best pound-for-pound fighters before his upset loss to Lopez. And one could argue that Lomachenko could have won that fight if he’d figured Lopez out a little earlier.

Nakatani’s best win was against Felix Verdejo. Verdejo knocked down Nakatani, 32, in two separate rounds and was arguably in control of that bout, until he was hit with a quick left that ultimately ended the fight in the ninth round. Lomachenko’s portfolio is much thicker than Nakatani’s, and even at 33, Loma still has a case as one of the best lightweights in the world.

Someone such as Lomachenko doesn’t go from being one of the consensus best fighters in the world to losing against someone who has never even sniffed a legitimate world title. To say this is a big risk for Lomachenko is to suggest he is no longer one of the best in the world. And even after a loss to Lopez, there isn’t nearly enough evidence to suggest Lomachenko is not elite anymore.

Real or not: Javier Fortuna will test Ryan Garcia’s chin even more than Luke Campbell did

Wolfe: Real. This certainly depends on which Fortuna shows up, but we’re going to bet he will bring his A game for a bout with Garcia. Fortuna has more natural power than Campbell, who has never been considered a knockout artist. Fortuna’s southpaw style and speed also give Garcia more to deal with than the game but limited Campbell did. It would be a different test and possibly a more dangerous test.

The biggest weakness in Garcia’s game right now is his defense: He has the tendency to stand flat-footed, which will certainly be something other fighters aim to exploit when they fight him. Fortuna also has even more experience in notable fights than Campbell, so I’d certainly be eager to see how Garcia handles this challenge.

Real or not: Amanda Serrano is the most exciting women’s boxer in the world right now

Rothstein: This is most definitely real. That’s not a knock on Katie Taylor or Claressa Shields or any of the other high-level female fighters in the sport at the moment. But Serrano’s knockout power — and ability to register knockouts regularly — offers a different level of excitement, especially when it comes to fights where rounds are only two minutes long.

Serrano’s competition hasn’t always been the best — that’s part of why some knockouts have come — but when she has fought top-level fighters, she has been able to register knockdowns and knockouts then, as well, including her ninth-round KO of Daniela Bermudez on Thursday.

That Serrano is willing to bounce around weight classes to chase titles also gives her a level of intrigue, as the majority of her fights since 2016 have had some title implications.

Is she the best pound-for-pound female in boxing? No. That still goes to Shields and then Taylor, but Serrano could be No. 3. And while Serrano talked about unification following her last win, unification in another division — the junior lightweight division — could lead to a fight against Mikaela Mayer, Terri Harper or Hyun Mi Choi. And that fight — particularly if it were against Mayer or Harper — would be a massive one for the careers of both women.