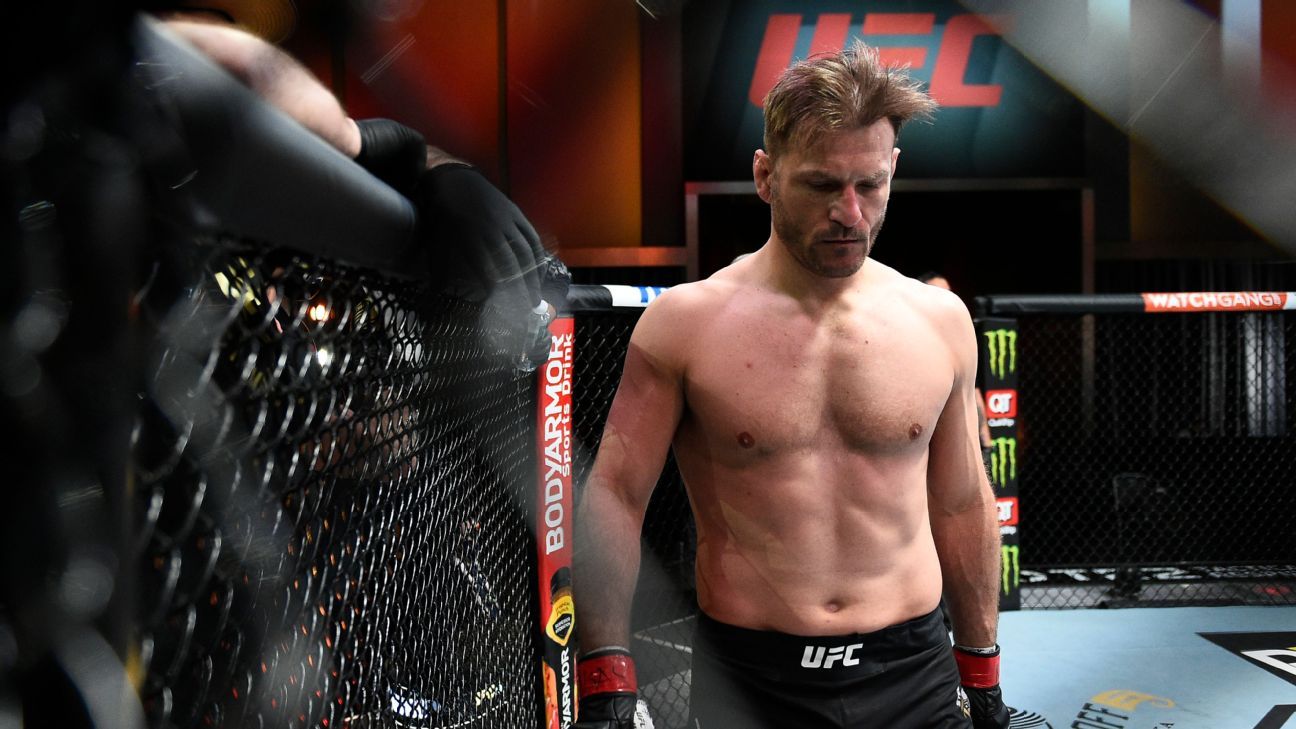 ESPN’s panel of Ariel Helwani, Marc Raimondi and Phil Murphy breaks down the biggest stories coming out of UFC 260, including Stipe Miocic’s future after his second-round KO loss to Francis Ngannou, what questions are still left to be answered about Sean O’Malley, and if there’s a future in the UFC for former welterweight champion Tyron Woodley.

Helwani: Give Stipe Miocic his due

Make no mistake about it, the story of UFC 260’s main event was Francis Ngannou‘s victory.

Ngannou said Thursday that he didn’t recognize the guy who lost to Stipe Miocic in 2018, and now we understand why. The fighter we saw Saturday night wasn’t the same person who lost a unanimous decision to Miocic in Boston over three years ago. That was very clear.

The Ngannou of 2021 was poised, patient, well-rounded. It was incredible to watch.

Credit goes to his coaches Eric Nicksick, who has developed into one of the best coaches in MMA, and Dewey Cooper, for turning him into the fighter he is today.

But as I was admiring Ngannou’s triumph, I couldn’t help but think of something that I don’t believe was talked about enough going into Saturday night: the effect the trilogy against Daniel Cormier had on Miocic. If you ask me, those three fights played a factor into Saturday’s result, too.

This isn’t me trying to take anything away from what Ngannou did Saturday night. But, considering those three Miocic-Cormier fights were so spread out, it does feel like we forgot about the damage Miocic took in those bouts over time. Remember, he got knocked out in the first, was losing the second one before turning things around in the fourth round, and then went five full rounds in the third fight last August.

You don’t walk away from so many rounds against one of the greatest fighters of all time and not leave a piece or two of yourself in the cage afterwards. Those are the kind of fights that change careers and lives forever.

MMA fans love to talk about how the Robbie Lawler vs. Rory MacDonald fight, for example, changed both men forever — and it did. The same is said about the Cain Velasquez vs. Junior dos Santos trilogy, yet, for some reason the three battles between Miocic and Cormier were hardly talked about going into Saturday.

Miocic turns 39 in August. Now, it is not uncommon for a heavyweight to enjoy success into his 40s, but I have always felt like once he lost the belt in this latest run that it would spell the beginning of the end of his career.

He doesn’t love the limelight, he doesn’t love the media, he doesn’t seem to love all the things that come with being a prizefighter other than the fighting itself. He’s a simple man, a blue-collar man who just so happened to become the most-decorated UFC heavyweight champion ever.

I have no idea if this was his last fight. I asked him whether this could be in our interview last week and he deflected the question, as he often does. He did say he thinks about retiring after every fight, but eventually comes back.

He doesn’t usually get knocked out like that, though.

Is he getting an immediate third crack at Ngannou? It’s doubtful. Of course, he certainly deserves it, but there’s Jon Jones out there, and that’s just an absolute massive money-making fight.

But even if that one doesn’t materialize, it sounds like the UFC brass is more keen on Derrick Lewis being next for Ngannou than Miocic, because, well, that’s who Dana White mentioned at the postfight news conference.

Does Miocic really want to climb all the way back to a title shot only to face that man again?

For what? Money? Well, that is a great reason, but Miocic has never seemed to be the money type. He’s accomplished it all and beat them all, including Daniel Cormier — twice. I think it’s time we recognize and appreciate the toll that incredible trilogy had on the tail end of his career.

Sean O’Malley walked over to the side of the cage where the media was sitting and quipped, “All you’ve gotta do is kick his ankles, that’s all you gotta do.”

After Marlon Vera defeated O’Malley with some well-placed leg kicks last August, there has been plenty of speculation that O’Malley might have some durability issues. On Saturday night, however, that certainly did not appear to be the case. O’Malley violently knocked out Thomas Almeida in the third round and overcame some adversity to get there.

In the first round, the flashy O’Malley, who sported rainbow-colored cornrows, seemed to have a head-kick knockout all buttoned up, but Almeida recovered quickly and referee Mark Smith allowed the bout to go on. While it wasn’t the early walk-off knockout he seemed to be hoping for, going into the third round against Almeida was a positive. It gave O’Malley a chance to show he can weather some storms — Almeida kicked his legs hard several times — and stay in stride.

There are some question marks around O’Malley, who has all the makings of becoming a future star. How will he fare against the top talent that awaits him at bantamweight? Almeida has lost five of his last six fights and he’s not an elite fighter at this point. This was clearly matchmaking to help O’Malley get back on track. And that’s exactly what the UFC should have done in protecting a 26-year-old prospect. The “Suga Show” did get to answer some of questions Saturday night, if not all of them. We’ll likely find out much more about O’Malley in his next bout, which is likely to be against stiffer competition.

History won’t be kind to Tyron Woodley‘s post-title reign. The former UFC welterweight champ has lost four consecutive fights, the first three of which came against perhaps the division’s top three in the world and the latest to fast-rising Vicente Luque. Woodley failed to even win a round over those four outings. Losses to opponents of that caliber look excusable, but none offer any demand for a rematch.

No elite fighter has incentive to face Woodley, so no bookable bout generates ability for him to quickly regain footing. In a conversation with Ariel Helwani earlier this week, Woodley acknowledged the volatility of someone in his position, saying, “There’s always one fight on your deal for me. Because you can have 10; you have three; you can one. If you don’t do your f—ing thing, they can always say sayonara.”

Luque deserves the spotlight after creating further excitement over his career trajectory, picking up a ninth win in his last 10 appearances. But the greater consequence of Saturday’s result falls on Woodley, who will turn 39 in April. The questions he must now answer are far less pleasant.