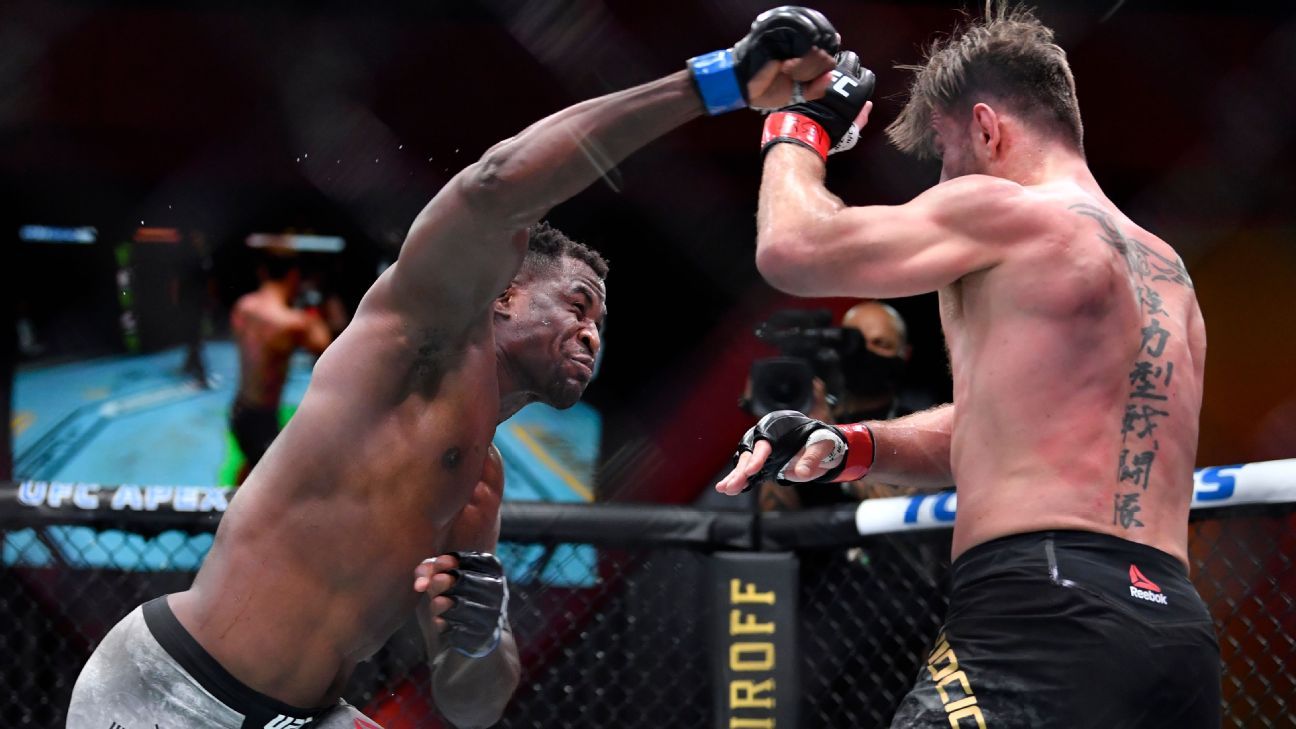 UFC 260 proved to be a changing of the guard in the heavyweight division. Francis Ngannou displayed enhanced fight skills beyond his already devastating knockout power as he dethroned Stipe Miocic with a thoroughly impressive all-around performance.

But with that knockout behind him, and the UFC heavyweight championship belt around his waist, the natural inclination is to look ahead to what’s next. And as big a fight as the Miocic title clash was, the potential of a superfight between Ngannou and GOAT candidate Jon Jones carries massive implications in its own right.

That’s provided Jones and the UFC can come to financial terms, which is not a guarantee, especially considering Jones and Dana White were both digging their heels in publicly from the moment Ngannou landed a final haymaker to a grounded Miocic to finish the fight. If the two sides can’t come to an agreement, Derrick Lewis looms as another possibility.

Then there’s the matter of Miocic, who has flirted with the idea of retiring in the past, but has not discussed his future since losing his title. Will Miocic get a trilogy fight with Ngannou to settle their 1-1 score, and if so, where does it fit within the larger framework of the division?

With so many big questions lingering after Saturday night, our panel of Ariel Helwani, Brett Okamoto, Marc Raimondi and Jeff Wagenheim separates what’s real from what’s not.

Despite the rhetoric, the UFC and Jones will come to terms to book Ngannou vs. Jones next

Francis Ngannou addresses a potential bout with Jon Jones, and where that fight should take place.

Okamoto: Real, but there is no doubt about it: this is a legitimate hurdle. Don’t forget, Jones was publicly talking about money last year, too. And it’s pretty telling that the first thing he posted on Twitter, the minute Ngannou won the belt, was ‘Show me the money.’ And then he continued on into the evening, talking about money.

Dana White responded, as he has to Jones and others in the past, by essentially saying Jones is asking for such an enormous amount, it indicates he doesn’t really want the fight.

This is not good, guys. None of this is good.

I am a far cry from feeling 100 percent confident this matter gets resolved. However … I am optimistic. If I’m not 100 percent, let’s say I’m 75 percent confident this fight will happen next — because it HAS to. This just became the No. 1 fight the UFC can make. I think it’s bigger than the Conor McGregor–Dustin Poirier trilogy (or at the very least, on par with it). It’s the only fight for both of them. You can’t dangle Ngannou vs. Jones in front of us, and then give us Ngannou vs. Derrick Lewis 2, and Jones vs…. who exactly?.

I am going to try to remain faithful. There’s still time for the UFC to do the right thing. I am supposed to be seeing a fight proposal next week. Fingers are crossed, this is an opportunity of a lifetime for everyone involved.

No disrespect to Lewis or any other heavyweight, but there is not another matchup for Ngannou that is even close to Jones in terms of appeal. I think we’ll get there, but we might see a few more frustrated Jones tweets along the way.

If Ngannou vs. Jones doesn’t happen, look for Lewis to be Ngannou’s first challenger

Helwani: It would either be Lewis or Miocic. But Lewis has the edge because he’s fresher and isn’t coming off a vicious knockout loss. What hurts him is the first Ngannou-Lewis fight, which was highly anticipated, turned into one of the biggest duds in UFC history. Now, I feel confident a rematch won’t play out the same way, but the stench of that fight still lingers, unfortunately.

That said, Miocic will now take some time off. He and his wife are expecting their second child later this year, so I’d imagine he’d want a break. Would he expedite his timeline for another crack at the belt immediately? I suspect so, but if not, I wouldn’t be surprised if he takes the rest of 2021 off, if not longer.

So that leaves Lewis as the only viable contender available if the big Jones fight doesn’t get made. And you know what? You can do a lot worse than a guy who has won four in a row, including two straight second-round finishes, and who also is very popular with the fans. Oh, and he has a win over Ngannou three years ago, too. Ngannou’s last loss, as a matter of fact. I can see the promotion now …

Ngannou is poised to enjoy a long reign as champion

Wagenheim: “Poised” is right. Even a one-dimensional Ngannou, the knockout artist of a few years ago, might have been capable of holding onto the belt for a long time. But the fighter we saw on Saturday night — well-rounded and, yes, poised — raises real concerns for any heavyweight with an ambition to become champion.

At age 34, Ngannou is just entering the prime years for a heavyweight. So I don’t envision him fading anytime soon, which means the new champ is in position to reign for as long as he’s interested in fighting. Who’s going to dethrone him?

Jones gets first crack — you don’t believe fans would stand for the UFC handing the title shot to a cut-rate alternative, do you — and the former light heavyweight champ is perhaps the greatest fighter of all time. For years, it has been all but impossible to envision Jones losing. But he’s flirted with defeat in his last couple of bouts, and the step up to heavyweight puts Jones in a shark tank of unfamiliar waters, debuting against a man aptly called “The Predator.”

If Jones cannot budge Ngannou from his throne, what about Lewis in a tempting-fate rematch of the worst fight in heavyweight history, then? Or Miocic in a fight to settle their 1-1 trilogy? Or a rising contender such as Ciryl Gane or Alexander Volkov? No, no, no and no.

Ngannou could be champ for years.

That’s in terms of the calendar, of course. In cage time, Ngannou’s reign might well consist of a series of short snippets of time — half a minute of furious fighting before knocking out one challenger, just a few seconds of thunder before finishing the next, and so on.

Then again, maybe patient Francis is the Ngannou we’ll see from now on. Rather than thrilling fans and thrashing heavyweights with a nonstop blast of “don’t blink” smashfests, as he has delivered for nearly all of his UFC tenure, maybe the new champ will continue to display his evolution as a martial artist. The leg and head kicks, body punches and takedown defense all made their debut against Miocic on Saturday, as did a composure that equipped Ngannou for a long night of fighting, if that had been what was asked of him.

The realization that the most dangerous knockout artist in MMA history is getting even better is frightening. Even scarier? If Ngannou fights continue to last into the second round or even beyond, and he proves he has a gas tank to match that expanding skill set.

We will see a trilogy fight between Miocic and Ngannou

Raimondi: I had a chance to spend 24 hours with Miocic at his firehouse in Valley View, Ohio two years ago. That day, while waiting for calls to come in, the firefighters engaged in a game of cornhole right outside the station garage. Miocic grew frustrated with his partner, talked some smack to the opposition and then called his shot at the end, nailing the game-winning throw. It quickly went from a game just to pass the time to an activity that Miocic absolutely did not want to lose. He is ultra-competitive, even in recreational settings.

All that is a long-winded way of saying “real” to this statement. There has been talk of retirement around Miocic for a few years already. And I still think that the end is likely near. He’s 38 years old, has a daughter, plus a son on the way, and family is absolutely his top priority. Plus, he will keep his job as a firefighter and EMT after retirement, likely becoming full-time at Valley View with the benefits — healthcare, pension, etc. — that come with that job. However, if Miocic was going to hang up the gloves after UFC 260, it was more likely to be after a win. As good as Ngannou looked Saturday night, Miocic very likely is already thinking of ways he could win a third fight.

Of course, things could always change. Miocic has taken his fair share of damage between the two fights with Ngannou and the trilogy with Daniel Cormier. Maybe him, his team and his family come to the conclusion that it’s time to walk away. There are other factors at play here, too. If Miocic does return, I doubt it would be any time in the near future. Ngannou will likely fight Lewis or Jones next, depending on if the UFC can come to financial terms with Jones. It’s possible Ngannou could even fight both of them before Miocic returns. Miocic has only fought once per year since 2018. There’s no guarantee Ngannou stays champion to set up that Miocic trilogy bout in 2022, though I wouldn’t bet against him.

One last thing: Miocic deserves the trilogy fight. He beat Ngannou in one-sided fashion at UFC 220 in 2018. Ngannou improved greatly and really evolved as a fighter since then. Miocic granted him the rematch. It would only be fair for Ngannou to do the same. Miocic is the greatest UFC heavyweight champion ever. Nothing about what happened Saturday night changes that. As much as anyone, Miocic should be granted the ability to write the last chapter of his storied career on his terms, whatever they might be.