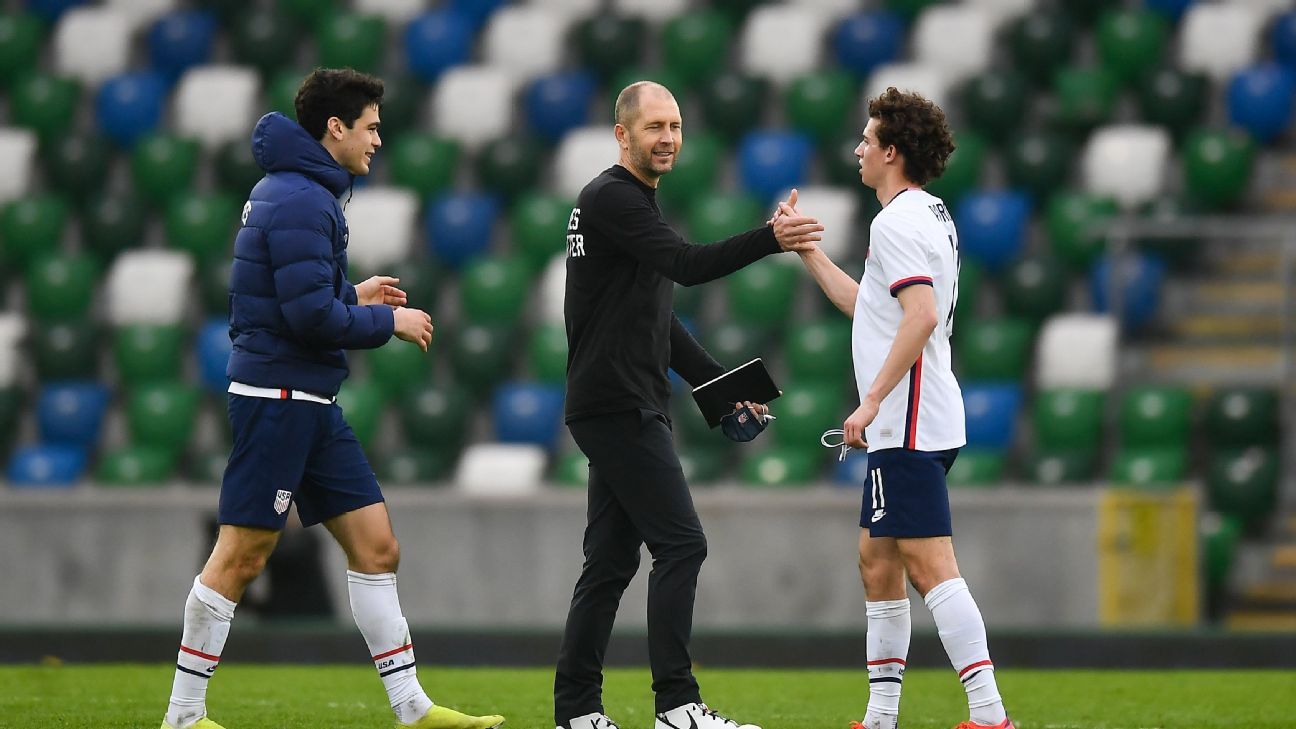 U.S. men’s national team manager Gregg Berhalter has done plenty of experimenting in his time in charge. Forty-three players have made their international debuts since Berhalter took over in Dec. 2018. In Sunday’s 2-1 victory over Northern Ireland, Berhalter engaged in a different kind of experiment, going with a three-man backline.

Given the relatively low stakes, it was smart of Berhalter to give the alignment a try. The formation switch certainly amounts to a different look and will give future opponents something to think about in the months ahead. It also fits some aspects of the Americans’ personnel. The U.S. has a logjam of center-backs of comparable ability, and the same is true in terms of central midfielders. It also allows for wing-backs like Antonee Robinson and Sergino Dest — whose skills skew towards the attacking side of the game — to get forward. And it’s not the first time Berhalter has trotted the formation out, having done so in a friendly against Jamaica prior to the 2019 Gold Cup.

Unsurprisingly, there were periods of fluidity, as the U.S. had the vast majority of possession. An early sequence saw Christian Pulisic release Robinson deep down the left wing, only for Robinson’s ensuing delivery to miss a trio of targets in the box.

Pulisic and Giovanni Reyna both looked lively in the match, with the latter opening the scoring in the 30th minute, and Pulisic adding the eventual game-winner from the penalty spot just prior to the hour mark. Even more important for Pulisic, he looked freer than he did against Jamaica. How much of that is down to the formation is up for debate, but it was nice to finally see both players impressing within the same team.

Pulisic’s performance will provide some assurance that even if things aren’t going great at club level, he can still provide the kind of dynamic attacking presence the U.S. needs. Though for Berhalter, Pulisic contributed off the ball as well.

“Forget about all the great stuff he does on the ball, he just competed today,” Berhalter said about Pulisic. “And when he’s in that type of mode, you know, he’s just an unbelievable player and that’s what I was most happy with today, it was his relentless pressing. He just kept going and going and going and then you know he’s so good on the ball, he can unbalance the team and to me, he had an overall really strong performance.”

But there were also some rough spots for the Americans. One of the requirements for playing three in the back is that the center-backs and holding midfielder need to be tidy on the ball, and in the first half there were enough errors from that group to make the U.S. look vulnerable in transition. On more than one occasion it took just one or two passes to put a Northern Ireland attacker in a one-on-one situation with a U.S. defender, including a sequence in the 38th minute in which Shayne Lavery forced a diving save out of Zack Steffen.

Berhalter noted that while not wanting to make excuses, the field conditions at Windsor Park were difficult. Of course, the U.S. can expect more of the same in CONCACAF World Cup qualifying, and Berhalter did note that the turnovers got his side in some trouble.

“It was difficult and we lacked a little bit of that precision on the ball, and that’s why we had some turnovers,” he said. “What I like though is that the guys still tried and you see in the second half, there’s a period where we really came up and took possession of the ball and moved it around nicely. So overall, you know, please with the, with the I think the effort to execute the game plan.

Some of the biggest problems for the U.S. were independent of formation, namely a propensity to concede set pieces that tilted the first-half momentum to Northern Ireland. That was a problem against Jamaica as well and will be something for Berhalter to keep an eye on going forward.

The U.S. looked more comfortable and assured within the formation after the half-time break, and looked to be in control when Pulisic won and converted a penalty. At that point a parade of substitutions saw the game become a bit more open, and the U.S. really should have added to its lead with a slew of chances. When Niall McGinn scored on an absolute thunderbolt from a tight angle in the 88th minute, it made for a nervy final few moments, but the U.S. was able to see it out.

So should Berhalter give the three-man backline another try? It’s worth noting that Northern Ireland have a World Cup qualifier against Bulgaria on Wednesday, and as such were going to save their collective energy for that match. That said, it’s certainly worth exploring, especially when Weston McKennie and Tyler Adams are back in the fold. Unfortunately, outside of the May 30 friendly against Switzerland, there won’t be many more opportunities to try the formation out ahead of the Nations League in June.

Yet through it all, the U.S. experimented and recorded a rare win in Europe, making it another test passed for Berhalter and Co.