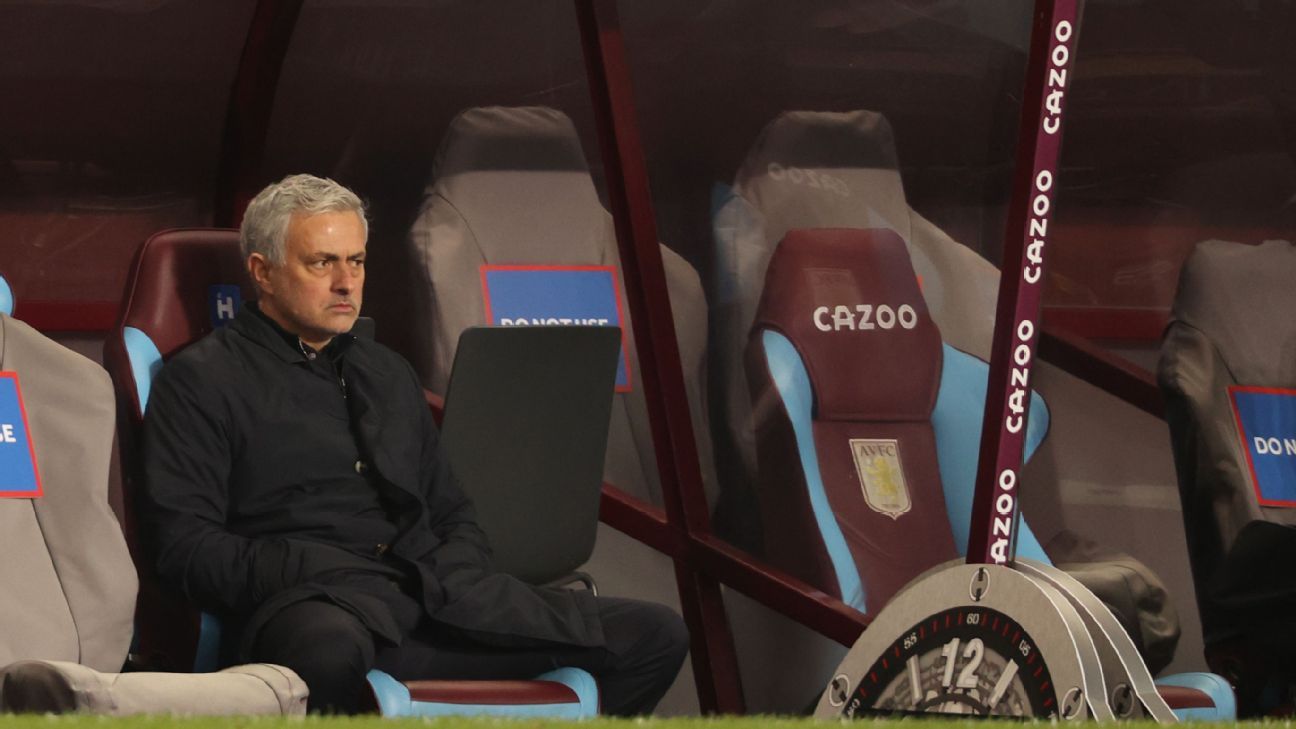 The life cycle for hiring Jose Mourinho as your manager has been pretty well-defined through the years.

First, you win big. He won Chelsea‘s first two top-division titles in 50+ years in his first two seasons at the club. He won two Serie A titles and a Champions League in two years at Inter. He fielded the most dominant team in La Liga history in his second season at Real Madrid. He won another league title in his second year back at Chelsea. He engineered Manchester United‘s only top-two finish since Alex Ferguson’s retirement in his second season at Old Trafford.

Then, the drama begins. At some point — usually in his third season at a club — the results flag a bit. Players stop responding as well to the intensity of Mourinho’s demands, poor results creep into the picture — a frustrating late loss to a minnow here, a blowout loss to a heavyweight there — and rumors of player discord waft out of the dressing room, soon picking up velocity. Mourinho begins to get testier with the media. The club (usually via anonymous sources) and its fans express dismay with his lineup selections, typically in his lack of trust in a young hotshot prospect.

Finally, he departs. Typically, he’s walking away with a large buyout in hand.

By hiring Mourinho, you’re signing up for trophies, a heavy and immediate investment in player talent — from Michael Essien and Didier Drogba at Chelsea, to Paul Pogba at Manchester United — and a more dramatic than usual departure.

His time at Tottenham Hotspur, however, has followed a different script. For one thing, though the club has more money and talent than most of its peers, it doesn’t have the financial (or roster) superiority that most of Mourinho’s previous employers have boasted. And due in part to the effects of the pandemic, the club’s moves since hiring Mourinho in November 2019 have been more calculated and less free-spending: they’ve made loan deals for Gareth Bale and Carlos Vinicius, while their biggest transfer spending was geared towards strong, but less-than-Pogba-level, players like Pierre-Emile Hojbjerg, Sergio Reguilon (though Real Madrid did insert a buy-back clause) and Steven Bergwijn.

When attackers Harry Kane and Heung-Min Son have been healthy, Spurs have been a perfectly solid team. From the start of Project Restart last summer (which finished the delayed 2019-20 season) through mid-December — a span of about 21 matches for each club — they generated 43 points, tied for most in the league with Pep Guardiola’s Manchester City. They have also advanced to the League Cup finals; an upset of City on April 25 would bring the club its first major trophy since 2008.

Still, they suffered an embarrassing collapse in the Europa League round of 16 earlier this March, and despite a solid recent run of league form, they remain three points off of the Champions League pace for next season. That initial burst of wins and trophies that you sign up for — the reason the eventual drama is worth it for so many clubs — hasn’t materialized.

When players return from the international break later this week, Spurs will set off on one of the most important stretches in their time as an aspirant soccer heavyweight. With the League Cup battle against City looming, and league contests remaining with Manchester United (April 11), Everton (April 17) and Leicester City (May 23), the season could finish with a trophy and Champions League qualification, or it could finish with neither.

While we wait to see how things play out, it is perhaps worthwhile to look at how Mourinho teams take shape statistically, where Spurs have lacked to date and what things tend to look like when his tenures fall apart.

First, let’s clear up a misconception about “The Special One”

While Mourinho has long been associated with the word “pragmatism,” and while his first champion at Chelsea allowed a forever-incredible 15 league goals all season (in 38 games), his best teams of the 2010s were superior at both ends of the pitch. His 2011-12 Real Madrid team scored a La Liga record 121 goals, 3.2 per match, and at worst most of his Real Madrid, Chelsea (second tenure) and Manchester United teams had above average shot frequency and shot quality numbers. 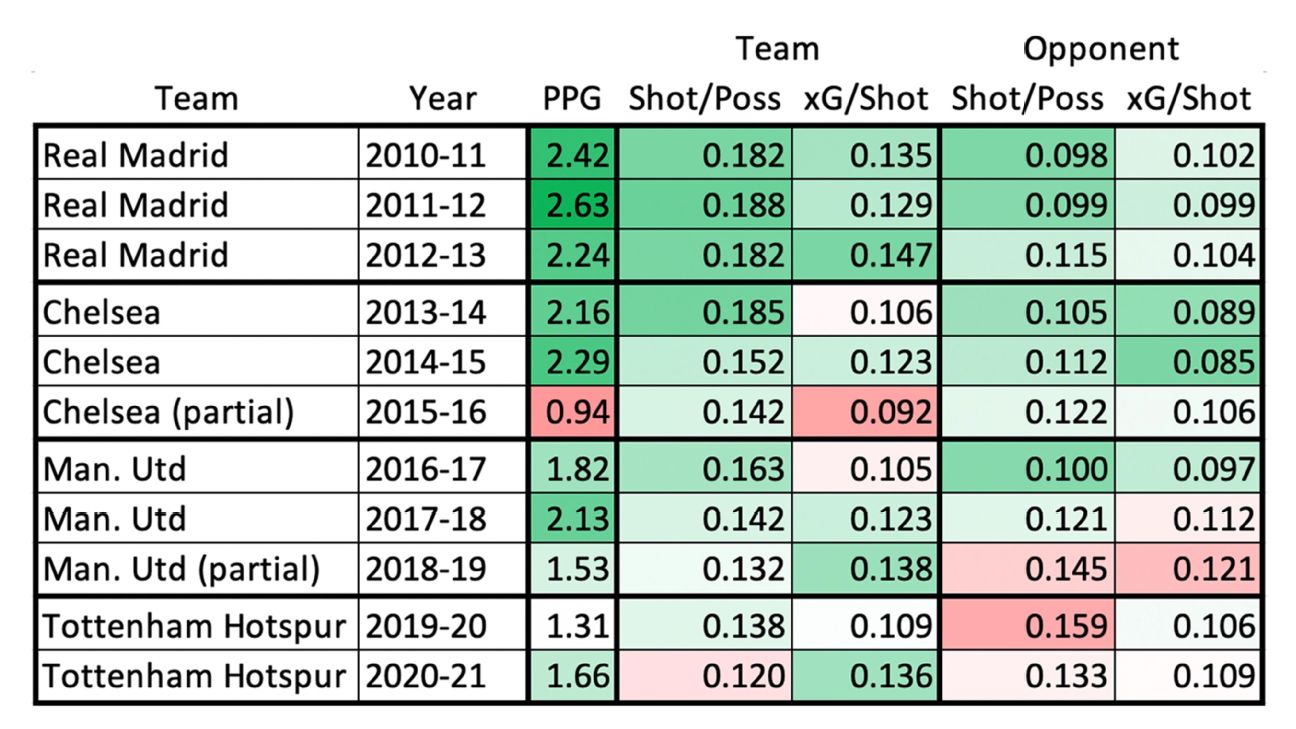 As it turns out, combining Mourinho’s pragmatic ways with otherworldly offensive talent — a peak-age Cristiano Ronaldo with Angel di Maria and Mesut Ozil at Real Madrid, Eden Hazard and a Diego Costa at peak-crabbiness at Chelsea — works pretty well. Go figure. While his focus has always been on defensive structure, and he will never over-commit numbers to attack if he doesn’t have to, he doesn’t necessarily get in the way of superior offensive talent either.

Well…. not at first, anyway. The longer Mourinho stayed at both Chelsea and United, the more their offensive returns diminished. His teams got a little more bunkered in, the shot quantity diminished, and the fact that his teams don’t engage in length-of-the-field pressing meant that there weren’t as many easy scoring opportunities created from said pressure.

Toward the end of a given Mourinho tenure, both the attacking and pressure stats tend to fade.

These shifts seem pretty small for the most part, but they flip results. In close matches — basically, matches decided by zero or one goal — Real Madrid went from averaging an unsustainably high 2.5 per game in his second season to 1.6 in his third, while Chelsea went from 2.0 to an unsustainably low 0.9.

These problems didn’t present themselves in every match, of course, but they occurred with increasing frequency toward the end of each of his tenures. Late in his third year at Real Madrid, for instance, came results like these:

– Borussia Dortmund 4, Real Madrid 1 (April 24, 2013): In the 17 or so minutes that this Champions League semifinal match was tied, RMA averaged just 0.05 shots per possession. Once behind, they were unable to generate pressure, starting just five of 109 possessions in the attacking third.

– Espanyol 1, Real Madrid 1 (May 11, 2013): Los Blancos had 70% of the possession and attempted more shots, but averaged just 0.05 xG per shot and again began just five possessions in the attacking third.

– Real Sociedad 3, Real Madrid 3 (May 26, 2013): A goal by Gonzalo Higuain defined the early going, but while RMA held the lead for 80 minutes, they averaged only 0.09 shots per possession while ahead and began only six possessions in the attacking third. RSO outshot them, 28-11, and eventually found an equalizer in stoppage time.

It was the same story near the end at Chelsea and Man United, too.

– Stoke 1, Chelsea 0 (Nov. 17, 2015): Chelsea had managed seven shots at just 0.07 xG/shot when Stoke scored early in the second half. Chelsea averaged only 0.06 xG/shot from there, began only five possessions in the attacking third and fell.

– Spurs 0, Chelsea 0 (Nov. 29, 2015): Chelsea let Spurs have a majority of the possession (as is frequently the case for Mourinho against top teams), but couldn’t counter off of it and finished the match with just five total shots at 0.06 xG/shot.

– Leicester City 2, Chelsea 1 (Dec. 14, 2015): The eventual league champs gave Chelsea 65% of the possession, but the Blues managed a ghastly 0.03 shots per possession and 0.07 xG/shot — a totally nonexistent attack — for the 33 or so minutes that the game was tied. By the time Chelsea generated some ideas in attack, they were 2-0 down. (Mourinho was sacked on December 17.)

– Manchester United 2, Arsenal 2 (Dec. 5, 2018): Different club, same story. In the 85 minutes or so that the game was tied, United took just seven shots at only 0.04 xG per shot. They exploded back twice when behind, but couldn’t create anything until then.

– Valencia 2, Manchester United 1 (Dec. 12, 2018): In the 16 minutes this Champions League group stage match was tied, United attempted no shots despite 53% possession. And once more, they couldn’t build traction until down 2-0.

If this type of defeat sounds familiar to Spurs fans, there’s a pretty clear reason for that.

Basically, this is just how Mourinho teams lose matches.

In their victories, Spurs fit a “normal” profile of a team in Europe’s Big 5 leagues. In losses, they are more meek in attack than the “normal” losing team. Again, these don’t seem like huge differences, but they add up.

Jurgen Klinsmann shares his thoughts on whether or not Harry Kane will leave Tottenham this summer.

Their Europa League collapse against Dinamo Zagreb had a similar theme. Spurs averaged just 0.05 shots per possession over the first 60 minutes while nursing a 2-0 lead from the first leg. Dinamo eventually scored twice to force extra time, then scored quickly again in the extra period. Spurs finally found the accelerator from there, but thanks in part to some incredible work from Dinamo goalkeeper Dominik Livakovic, it was too late.

This occasional offensive disappearance has combined with a lack of extreme pressure. Spurs allow 13.1 PPDA (10th in the league) and allow opponents 5.3 passes per possession (11th); they start just 5.7 possessions per match in the attacking third (17th), while opponents average 7.8 (18th).

To their credit, Spurs have played better since a dreadful February stretch of six losses in eight matches. They have since won six of eight overall after that, scoring 18 goals in the process. Gareth Bale has begun to find his fifth-gear form, which has given Spurs an extra avenue for attack beyond “Son and Kane do something amazing,” for which there hasn’t been a Plan B all season. Plus, the rumors of player discontent and/or Mourinho’s crankiness with the media have been kept to a minimum. As long as that remains the case, we aren’t necessarily in Mourinho End Times.

Of course, both the low-quantity Arsenal loss and the Zagreb collapse also happened in March. It was a “two steps forward, one back” sort of month, and it gives pause to any serious hope of a League Cup win or Champions League qualification.

So does the familiarity of the problem. For all of Mourinho’s innovation through the years — particularly in the field of “tactical periodization,” which became so well-accepted over time that teams from other sports have adopted its principles — he’s never had much of a Plan B in attack. Not everyone can stop Plan A, but when someone does, Mourinho appears to simply trust his players to figure it out. That doesn’t always happen.

Compounding matters for Spurs this year is that, as you can see in the chart near the top, his defensive magic has worn out to a degree. Spurs don’t allow many high-quality looks, but opponents take more shots than them. They are one of only two teams in Europe’s Big 5 leagues to average over 1.6 points per game despite taking fewer shots than opponents (the other: Everton) — they are the best of the shot-starved squads — but in this era of soccer, creativity in possession and full-length pressure are the most direct paths to winning. When you don’t offer those things, your ceiling is simply going to be lower.

Over the last five league matches, however, they’ve taken 52 shots to opponents’ 47, generated 8.9 xG to 4.6, averaged 7 possessions per game starting in the attacking third (not great, but better) and only suffered one Mourinho Special loss. If that’s the start of a trend, Spurs could still make quite a bit out of the 2020-21 season. If it was just a good month and regression strikes soon, Tottenham’s Mourinho experiment probably won’t see a third season.