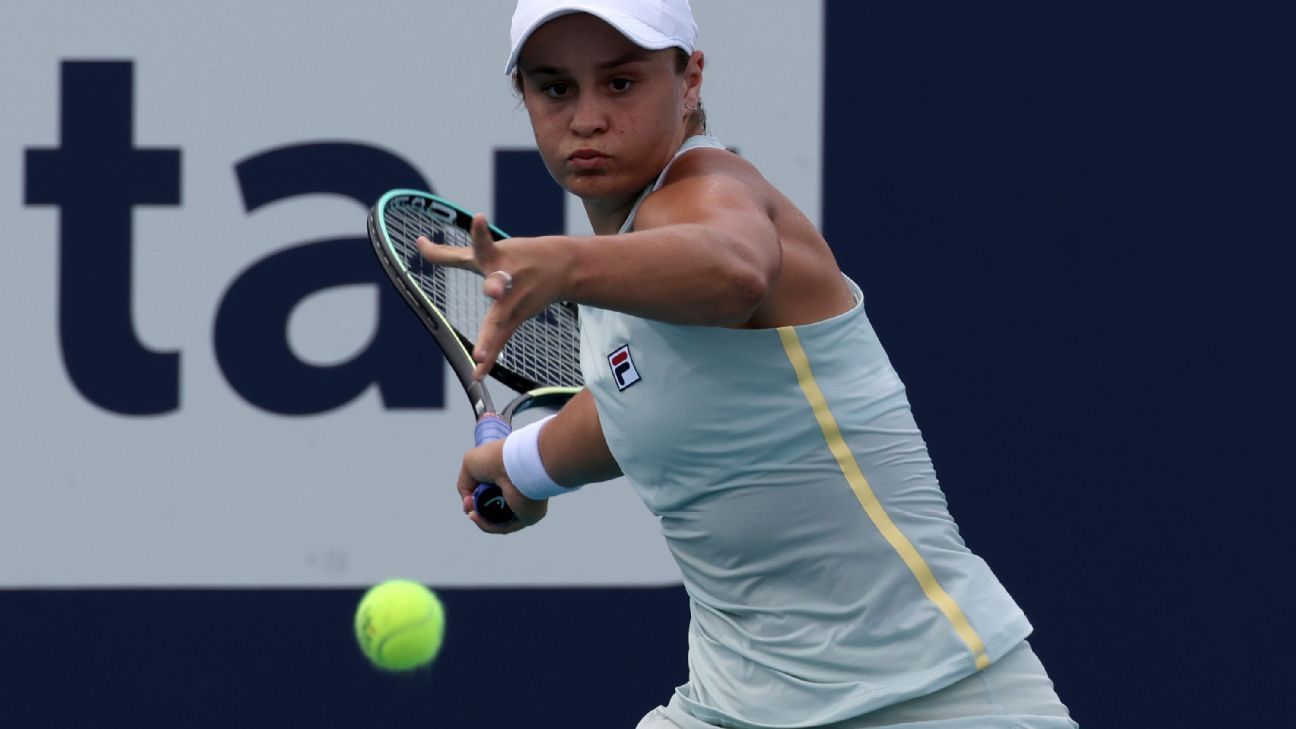 MIAMI — Ash Barty is tough to beat under any circumstances, especially when she’s on the ropes.

She proved that again Monday.

The world’s top-ranked women’s tennis player has reached the Miami Open quarterfinals, getting there by holding off 14th-seeded Victoria Azarenka of Belarus 6-1, 1-6, 6-2. It was Barty’s 17th win in her past 20 three-set matches, two of those victories for the Australian coming so far in this tournament.

This, too, was cool: The match lived up to its showdown potential, with the reigning Miami Open champion and current world No. 1 in Barty facing someone who has won the Miami title three times and is a previous world No. 1 in Azarenka.

Barty rolled in the first set, Azarenka in the second. But the third — as they tend to be — was all Barty, who was never in trouble in the deciding set even after nearly two hours on the court in the midday South Florida heat and humidity.

“It’s just about staying in the fight,” Barty said. “It’s about not relenting, not giving up regardless of whether you lose a set or you get a break, whatever it might be. I think it’s just about trying to hang around, and I’ve worked my backside off off the court to make sure that I feel like I’m good physical condition to play tennis.”

Another three-set win went to fifth-seeded Elina Svitolina of Ukraine, who needed nearly 2½ hours to beat ninth-seeded Petra Kvitova of the Czech Republic 2-6, 7-5, 7-5 and earn her ticket to the quarterfinals.

“It was not easy conditions,” said Svitolina, who has already matched her best Miami finish by making the quarters. “I was trying to fight, trying to find a way, one extra ball over the net.”

Barty will next face No. 7 seed Aryna Sabalenka, a 6-1, 6-2 winner over No. 19 seed Marketa Vondrousova. Svitolina will play unseeded Anastasija Sevastova of Latvia in the quarters; Sevastova was a 6-1, 7-5 winner over wild-card entry Ana Konjuh of Croatia.

No. 2 women’s seed Naomi Osaka of Japan ran her winning streak to 23 matches and moved into the quarters by topping No. 16 seed Elise Mertens of Belgium, 6-3, 6-3.

“I’m not the type of player that really needs that many tournaments to feel a groove,” Osaka said.

Osaka wasted six set points before finally finishing off Mertens to win the opening set; she needed five break points before cashing in to go up 2-1 in the second. Mertens later needed a medical timeout that lasted about 10 minutes while she left the court to get treatment on the area below her right shoulder.

She didn’t win another game; Osaka casually munched on a banana and took a few serves while waiting for Mertens to return, then cruised the rest of the way. Osaka next meets No. 23 Maria Sakkari of Greece, who won a 2-hour, 38-minute marathon over No. 29 Jessica Pegula of the U.S.

Unseeded Sara Sorribes Tormo of Spain got her fourth win of the tournament, all of them three-setters. She topped No. 27 seed Ons Jabeur of Tunisia 6-4, 0-6, 6-1.

Next up for Tormo: No. 8 seed Bianca Andreescu of Canada, a 3-6, 6-3, 6-2 winner over No. 12 seed Garbine Muguruza of Spain in Monday’s final match — capping a day when five of the eight women’s matches went three sets.

“I’m playing the best tennis of my life, this is for sure,” Tormo said after her shortest match of the tournament — a mere two hours.