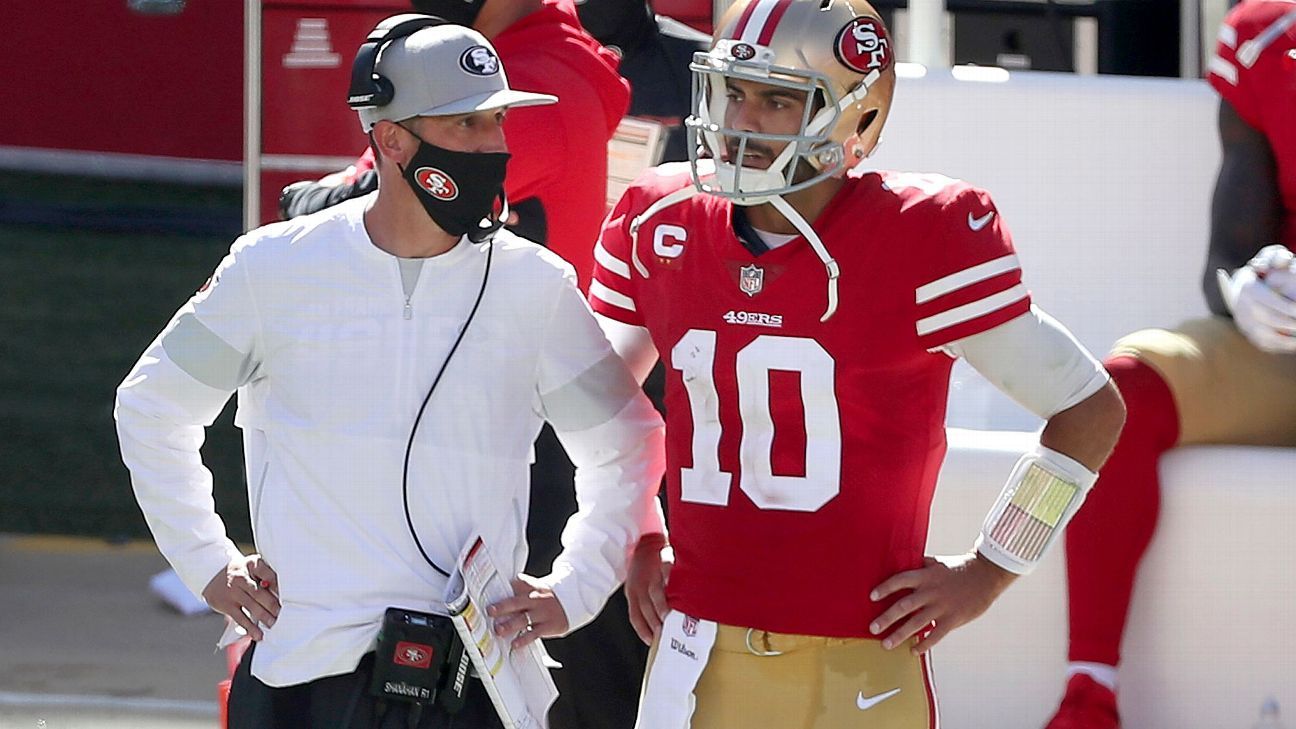 SANTA CLARA, Calif. — San Francisco 49ers general manager John Lynch and coach Kyle Shanahan came out of their offseason bunker Monday and shed light on their plans for the newly acquired third pick in next month’s NFL draft, what is to become of Jimmy Garoppolo and how they arrived at their decisions on all of it.

Speaking to the media for the first time since Jan. 4, Lynch and Shanahan spent 40 minutes detailing the how and why of the bold move they made Friday to acquire the No. 3 pick from the Miami Dolphins in exchange for the No. 12 pick this year, first and third-round choices in 2022 and a first-round selection in ’23.

Throughout, Lynch and Shanahan didn’t shy away from two widely held ideas: The Niners plan to draft a quarterback at No. 3 and they intend to hang on to Garoppolo, barring a significant trade offer for him.

“We’re in a situation where when you bring in a rookie quarterback, to me it’s always better, especially on the team that you have, if you’ve got a veteran starter there already who you like and you’re comfortable winning with, that’s usually the direction you want to go,” Shanahan said. “And not throw someone else out into the fire until they’re fully ready and that’s the situation we’re at … I think Jimmy, it’s going to be hard to find a quarterback who gives us a better chance to win than Jimmy right now, especially even a rookie in the draft… Now, if someone wanted (to give) something for (Garoppolo) and it could make our team better in a lot of other ways, you listen to that but it also depends on how good you feel about that rookie.

After San Francisco’s disappointing 6-10 season, Shanahan and Lynch and their respective staffs set a course in January to begin exploring all possible options at quarterback. While they believed in Garoppolo’s ability to win when healthy, they also knew they could no longer risk having entire seasons lost because he couldn’t stay on the field.

“It’s been tough the two years he’s missed, it’s been hard to compete the same way,” Shanahan said. “So, we knew we had to look into that this year.”

Among the options considered, Shanahan mentioned that the Niners looked at Matthew Stafford, who ultimately was traded to the Los Angeles Rams, and monitored Houston Texans quarterback Deshaun Watson‘s potential availability.

The idea of trading up from No. 12 to take one of the draft’s top rookies and keep Garoppolo on board lingered but was largely dependent on a flurry of other things happening first. When free agency opened, their ability to keep many of their own key players such as left tackle Trent Williams and fullback Kyle Juszczyk offered the Niners two things they coveted: a roster that could compete immediately in 2021 and the unique position of having no glaring needs for the draft that would steer them away from a big move at quarterback.

Lynch said the Niners began talking to other teams near the top of the draft weeks ago in the belief that there were up to five quarterbacks who could become the future face of the franchise. Those quarterbacks — Clemson’s Trevor Lawrence, BYU’s Zach Wilson, North Dakota State’s Trey Lance, Ohio State’s Justin Fields and Alabama’s Mac Jones — all had at least some appeal to Shanahan and Lynch, who surveyed the quarterback landscape around the league and believed they would have no shot at any of them if they didn’t make a move quickly.

“We felt pretty strongly we were gonna get left at the altar sitting there at 12,” Shanahan said. “There are five guys that are kind of at this party a little bit and people are talking about them going everywhere. They’re all over in the first round. Our feeling is these guys were going to go a lot higher than people realize.”

Just before the deal became official, Lynch went to Niners ownership and laid out the plan to move all the way up to No. 3 and keep Garoppolo and his $26.4 million cap hit in 2021.

“We went to ownership and said, ‘Hey, things are looking good. We’d like to make this move but we also don’t want to say goodbye to Jimmy,'” Lynch said. “It was a stated goal that we needed to come out with the quarterback position being stronger this year and I think we’ve put ourselves in an opportunity to make that happen with this move.”

In the hours before the trade was announced, Shanahan spoke with Garoppolo, explaining to him what the Niners were about to do. According to Shanahan, Garoppolo wasn’t thrilled with the idea of the team drafting his future replacement, but Shanahan said he seemed to understand the plan to bring him back and to give it one more go and possibly rehabilitate his value in the process.

“I’m sure Jimmy was a little pissed off from it, just like I would be, too,” Shanahan said. “The more mad Jimmy gets, usually the better he gets. Jimmy just gets madder and stays healthy, this is going to be a good thing for Jimmy too, which could be a great problem for the 49ers.”

The next step for the 49ers is actually drafting their quarterback. Lynch and Shanahan said they have no intel on what’s going to happen in front of them aside from what’s viewed as the common knowledge — that Jacksonville will take Lawrence and the Jets will choose Wilson.

Shanahan acknowledged that the Niners are already comfortable with three quarterbacks on the list becoming the franchise’s future, though he obviously declined to say which ones, and that he could get there with four and five.

The Niners will spend the next few weeks doing their diligence on the top quarterbacks. Shanahan and Lynch are headed to Alabama’s second pro day to see Jones on Tuesday, while assistant general manager Adam Peters will be in Ohio to see Fields.

Shanahan said he plans to see Fields in person later after speaking with his agent, and there are plans for an up-close look at Lance, as well.

All of that, of course, will be happening in an odd offseason in which teams can no longer do private workouts, visits or dinners because of continued COVID-19 restrictions. If nothing else, the Niners at least no longer have to do any of it in secret.

“You get to three, you don’t have to mess with that stuff,” Shanahan said. “And I think that gives us a better chance now to do our due diligence because we don’t have to really play any games in that way.”