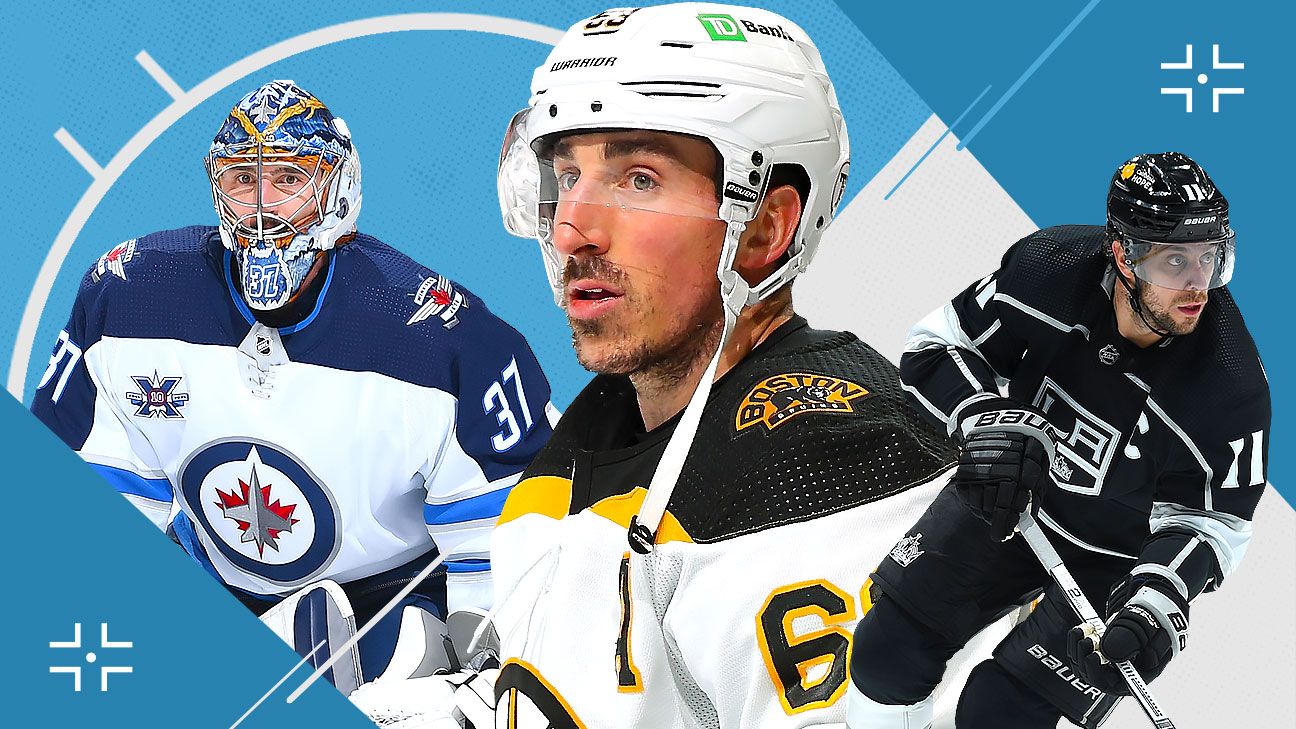 With the NHL trade deadline less than two weeks away, it’s a good time to take stock. We’ve hit on reasons for optimism for every team in the past. For this week’s power rankings, we identified a reason for concern for all 31 teams.

Note: Previous ranking for each team refers to our Week 10 edition, published on March 24. Points percentages are through the games of March 30.

It’s hard to find weaknesses in the Golden Knights game, and they should only improve as Alex Pietrangelo returns to the lineup. One thing to keep an eye on: Vegas is 19-3-1 against the Ducks, Coyotes, Kings, Sharks and Blues but 5-5 against the other top teams in the division, the Avs and Wild.

Despite the Canes’ success, the absence of top-line winger Teuvo Teravainen looms. The 26-year-old is sidelined with a concussion and there’s no timetable to return. “It’s a huge loss for a lot of reasons that a lot of people don’t understand,” coach Rod Brind’Amour told ESPN last week.

Yes, Tampa Bay is looking like it can repeat as champs. However, the Lightning are averaging more than 10 penalty minutes per game, which is tops in the league. They have a top-10 penalty kill, but it’s something to keep an eye on as we head down the stretch.

The Avalanche are blazing, with their point streak now reaching 11 games. The top line of Mikko Rantanen, Gabriel Landeskog and Nathan Mackinnon (combined 35 points over the last seven games) is dynamite again. The concern for the Avs is a common one for them: staying healthy down the stretch.

Lars Eller‘s recent absence shined a light on the Caps’ biggest lineup weakness: center depth. Heck, they had T.J. Oshie filling in from his usual spot on the wing, which didn’t do much for the team in the faceoff circle. “We need Lars back,” Oshie said Sunday. “I don’t know if my faceoff percentage can take it anymore.”

Coach Dean Evason has tried out seemingly every combination in the world, but the Wild can’t figure out how to get their power play clicking this season. It’s currently worst in the league, hitting at a sub-10% rate. For context: the Hurricanes lead the league at 30%. Big difference.

Aaron Ekblad was having a Norris Trophy-caliber season, but suffered an ugly injury over the weekend. After undergoing leg surgery, he’s sidelined 12 weeks. GM Bill Zito summed it up: “To be without a player of Aaron’s caliber and character is an irreplaceable loss to our hockey club.”

After the bad injury luck the Penguins had in 2019-20, good karma had to be coming their way this season, right? Pittsburgh keeps grinding out wins to climb up the standings, but the injuries are piling again. The latest is Tristan Jarry, who mysteriously exited with an upper-body injury after the first period Monday.

Jack Campbell has been fantastic — he has a .955 save percentage through six starts — but he’s managing an injury. “The reality is that he hasn’t been playing at 100% and the games take a toll on him,” coach Sheldon Keefe said. That is not ideal when starter Frederik Andersen is also injured.

The Islanders were red hot when their captain, Anders Lee, injured his ACL. New York has gone 5-4 since. It’s hard to project GM Lou Lamoriello’s moves, but it sure seems like he’s going to get a scoring winger at the deadline to help compensate for the loss.

The Jets are set in their forward group, and have enviable depth down the middle. Ahead of the trade deadline, their biggest concern is whether to add to the blue line. Logan Stanley, the 22-year-old first-round pick from 2016, is making his case to remain in the lineup down the stretch.

Connor McDavid has factored in on over half of all Oilers goals this season, which is the highest mark in the league. Leon Draisaitl has also been fantastic (second in the league in points) but beyond that, depth has been a concern. Forgive us if you’ve heard this story before.

Scoring at even strength has plagued the Bruins in 2021. We’ll put it bluntly: only the Sabres have scored fewer goals at 5-on-5 than Boston this season. Besides Brad Marchand and David Pastrnak, no Bruins player has more than six goals at 5-on-5. They’re looking for more from their depth players.

Discipline is a bit of an issue in Montreal. The Canadiens have a minus-18 penalty differential. It’s especially problematic since the Habs’ penalty kill is 21st in the league. The only silver lining here: Montreal leads the league in shorthanded goals, with seven.

The Blues don’t have comfortable footing in the West playoff race, and really could use more scoring. It’s one of the reasons Craig Berube made Mike Hoffman (eight goals) a healthy scratch on Sunday. “I just want more out of him,” the coach said.

The Predators have picked up their game — in large part to much-improved goaltending — to get back in the playoff hunt. But this team was looking to be sellers at the trade deadline. Can they remain competitive, but also plan for the future — and stockpile draft picks and prospects to finally infuse this team with a youth movement?

The Yotes are quietly making a run at a West Division playoff spot, but their offense still isn’t inspiring much confidence. They are last in the league in shots per game, shot differential per game, and rank 25th in goals per game, averaging just a hair over 2.5.

Depth down the middle is not one of the Rangers’ strengths this season, and one of the things New York’s centers haven’t been great at are faceoffs. New York ranks dead last in the league, winning only 44.7% of its draws. No regular centers are at 50% or better.

The Flyers’ season is quickly derailing. The defense has been way too leaky, but all eyes are on Carter Hart. The prized No. 1 goalie hasn’t been himself (8-9-3, .869 save percentage, 4.04 goals-against average) and coach Alain Vigneault is sitting Hart this week because the young netminder “needs to work harder.”

The Blackhawks have been a sub-.500 team since the beginning of March, slowly losing grip of their playoff footing. The biggest issue is that the underlying statistics predicted this. Per Natural Stat Trick, Chicago ranks 31st in the league in expected goals for percentage at 5-on-5.

The Kings are hanging in the playoff race, but they haven’t had much luck in tight games. Since the beginning of March, Los Angeles has gone 4-7-2 in one-goal games. That .200 winning percentage ranks 28th in the league in that span; only the Rangers, Habs and Sabres are worse.

The fundamental concern for the Stars: Can they get their act together quickly, and go on a winning streak to compensate for their slow start? Dallas’ games-in-hand, which has been its cushion all season long, is slowly dwindling. The Stars can’t afford to wait for the return of Tyler Seguin and Ben Bishop to turn things around.

Even if the Canucks want to do something at the trade deadline, it’s going to be difficult. They have no cap space. Also, Brandon Sutter, Antoine Roussel, and all of their regular defenseman — minus Quinn Hughes, who is on an entry-level contract — have either a no-movement or modified no-trade clause.

The Flames biggest concern right now: Can Darryl Sutter get through to players before it’s too late? Calgary brought back Sutter to light a fire under this group, and he’s doing it with his signature gruff, including calling players out publicly. After an encouraging start with Sutter, the Flames have won one of their last six games.

Over the last few seasons, the Blue Jackets have developed a reputation as one of the stingiest defensive teams in the league, which can compensate for some lackluster offense. That has not been the case this season, as Columbus is allowing the ninth most goals per game — and still not thriving on offense.

The biggest concern for the Sharks right now: Do they trade Patrick Marleau at the trade deadline? The veteran has said that he’s open to a deal like the one that sent him to Pittsburgh last season. Or, does he stick around and break Gordie Howe’s record for all-time NHL games played while wearing a Sharks sweater, albeit in another lost season?

Oh, what to do with Kyle Palmieri? The pending UFA has been the Devils’ most consistent scorer since joining the team in 2015, scoring at least 24 goals in every season leading up to this one. Does New Jersey work out a long-term extension, or say goodbye to the beloved winger at the trade deadline?

If Detroit can build a lead, it’s in good shape. Entering the week, the Red Wings are 11-0-1 when leading after two periods. They don’t have the grit to get out of a hole though, going 0-16-1 when trailing entering the third.

The pressing question for the Sens is whether a trio of their marquee prospects, currently in college, are going to decide to go pro this season. North Dakota’s Shane Pinto, Jacob Bernard-Docker and Jake Sanderson’s season ended with a devastating five-overtime loss to Minnesota-Duluth. Will they be in Ottawa this season?

Ahead of the trade deadline, the Ducks are poised to be one of the busiest sellers — if they choose to be. For example, Rickard Rakell is an attractive option to many teams (27-years-old, $3.9 million annual cap hit). But can Anaheim get enough in return, and do they want to give up on a player other teams find so valuable?

Oh, where to begin on the Sabres concerns? The winless streak has hit 18 games, the longest for an NHL team in 17 years. Buffalo blew a 3-0 third period lead against the Flyers Monday, and there’s no timetable for Jack Eichel to return. In one word: morale. That’s the biggest issue in Buffalo right now.