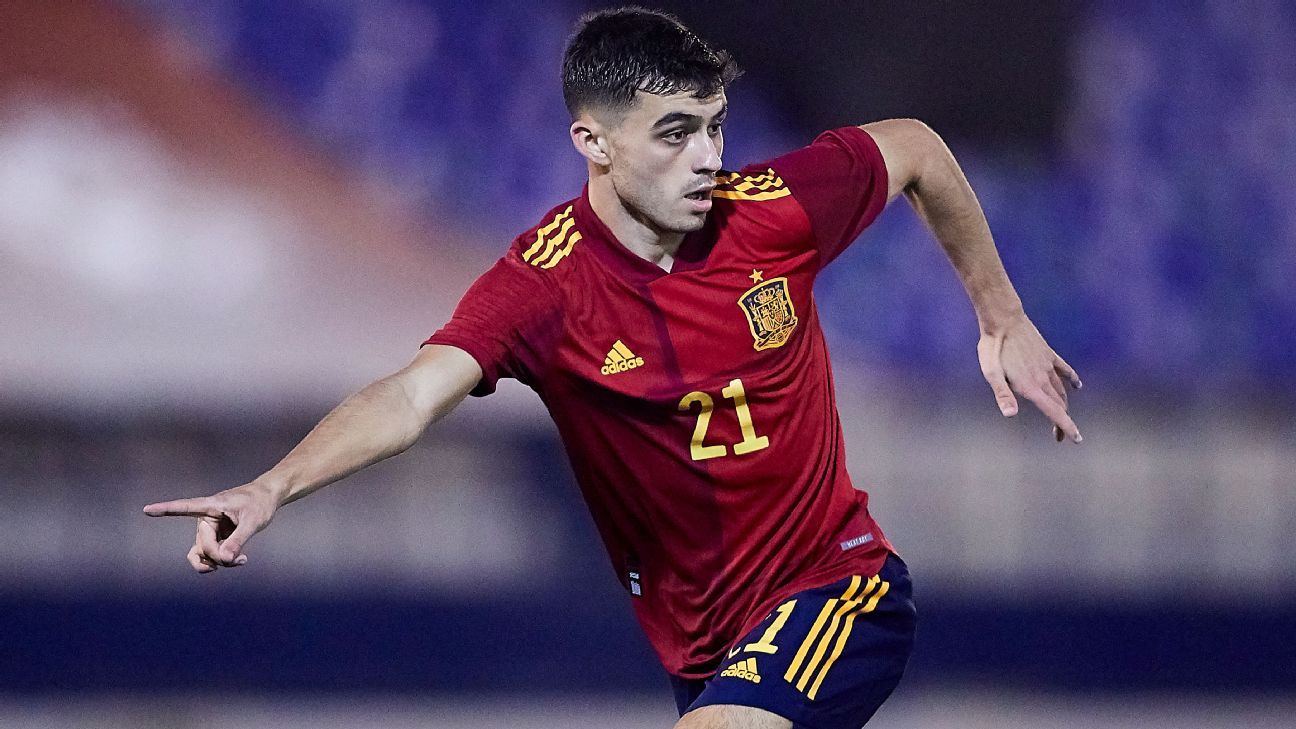 This subject is so important that we must start with the basics. His workaday name is Pedri. He plays in midfield for Barcelona and Spain. His full name is Pedro González López. He turned 18 in November.

Now, ladies and gentlemen: I’m going to construct a case that we are watching the blossoming of one of the world’s great talents. Whether that is of modern times or “all-time” is largely up to him. That’s how good he is.

When Pedri is on the ball, angels sing. Then they put down their harps and sheet music and just stare, in awe. His football brain is the size of California. He’s cheeky, brave, quick and old-school, Leo Messi is utterly in thrall to him, he loves the ball and the ball flippin’ adores him. We are talking about a guy who is several months into his debut season for one of football’s elite teams — we should, in theory, be seeing glimpses of something special gleaming through some up-and-down experiences as he finds his way in this vicious jungle we call “top-level football.”

Instead, this utterly stunning footballer is not only making the whole business look like child’s play (literally), but he’s consistently taking charge of matches to a degree that is properly astonishing. It’s like watching a football equivalent of molten gold: classy, fluid, attractive, and extraordinarily valuable.

Just in case you haven’t been watching his consistent domination of Barcelona’s season so far — where, if it weren’t for a recently resurgent Messi, Pedri would automatically be their player of the season — the skinny, pocket-sized playmaker from the Canary Islands offered up crystal clear evidence that he’s off-the-scale good when made his full Spain debut against Georgia in Tbilisi last Sunday.

Tensions were high going into that match. After Greece defended for their lives and took a 1-1 draw in Granada last week, dropping further points was “prohibido” for Spain on Sunday; in other words, totally unthinkable. The last time they’d started the first two matches of tournament qualifying without a single win was in 1957, thanks to a draw with Switzerland and defeat in Scotland — from there, La Roja failed to qualify for the 1958 World Cup. Building up to a contest against international opponents who beat them in Getafe last time the sides met, in 2016, it was a stark fact that it had been 15 years since Spain endured a streak of one win in their previous five matches. Things were that serious.

For a teenager to be making his full debut like that with senior, superstar pros like Sergio Ramos, Dani Carvajal, Pau Torres and Gerard Moreno missing, and on a third-rate pitch Luis Enrique subsequently complained about — he said the ball bounced around like a rabbit — was potentially the stuff of nightmares. Especially 1-0 down at half time and with Willy Sagnol’s Georgia team pressing, harassing and counter-attacking with abundant glee.

Pedri, however, is a guy who rolls his sleeves up and his socks down. He’s got an identifiably loping, slightly strange “trot” around the pitch. For most of my journalistic career, I’ve heard scouts from British clubs use the phrase “he can’t run” about footballers they’ve watched and quite like, only doubting their athleticism. It doesn’t automatically mean a footballer is outright slow, just that they give the impression that running, and especially sprinting, is a beautiful thing that they manage to make look brutal.

At first glance, Pedri’s means of drifting around the pitch is idiosyncratic enough that some observers might be distracted from his brilliance. He’s so intelligent and so relentless in his movement that he reads situations long before they’ve happened — well in advance of most of his opponents — and so, arms and legs pumping like pistons, but not noticeably sweating or sprinting Pedri is that most wonderful thing in team sport: right guy, right place, right time.

That all stood out when Spain equalised. Pedri simply glided into position, having anticipated midfielder Otar Kiteishvili and what wanted to do, blocked the Georgian and from the ball recovery, Dani Olmo fed Jordi Alba, who crossed for Ferran Torres‘ goal.

Shaka Hislop marvels at Pedri’s rise at Barcelona and taps the 18 year old for a breakout year in 2021.

The most spectacular moment in what was an absolute masterclass of confidence, match-reading, vision, technique and bravery came 20 minutes into what was beginning to look like a mortal threat to Spain qualifying directly for World Cup 2022.

Wide on the left, Bryan Gil shunted Pedri a nothing pass about 25 metres from Georgia’s penalty area. The Barça kid didn’t look up. Instead, he let the ball roll onto his right foot and struck a long, diagonal pass through a blizzard of five white-shirted opponents to Ferran Torres, who’d made a run towards the back post.

It was a pass he shouldn’t really have been able to see, let alone deliver with a ribbon on the top; meanwhile the City striker was so visibly shocked at Pedri’s outrageous technique that he let the ball run under his foot, wasting a glorious chance.

Just for a second or two, let me take you back to last summer, when Pedri was still a 17-year-old Las Palmas midfielder in Spain’s second division. This was the end of his breakthrough season, beginning when he was just 16, and after he’d already been rejected by Real Madrid after a trial there. But Barcelona had been alerted there was a little diamond of a drifting, impish player who looked like he’d spent his entire life earning his chops at the Catalan club’s La Masia academy. They struck a deal with Las Palmas, delayed the youngster’s arrival until the end of Spain’s pandemic-delayed season and there he was: happy, excited, largely unknown but completely uncertain.

Sid Lowe joins ESPN FC to discuss the outlook for La Roja after they opened World Cup qualifying with a draw.

Barcelona weren’t the only club, by any means, to have been alerted that something special was happening off the coast of Africa, over 600 miles south off the Spanish mainland. Borussia Monchengladbach, one of the Bundesliga’s Champions League sides, desperately wanted to take Pedri on loan immediately, suspecting that he’d be swallowed up and regurgitated by what was, at the time, a hugely volatile and irregular playing hierarchy at Barcelona. He’d also been told, pretty firmly, that the best he could aspire to in 2020-21 as a Camp Nou employee was playing for the second string.

In fact, as Pedri told Diario Sport last July: “I really hope Barca B get promoted to the second division because another year there, like I’ve just had with Las Palmas, when you’re young, can be good for you. But my sole aim is to become a Barcelona player and to triumph with the club, so I do understand that if they don’t see me as being ready for their first team, the best thing would be to go out on loan.

“The absolutely essential thing is to be playing. Some very interesting proposals have been offered from top-level clubs in Germany [Bayern Munich were widely thought to be the other.] “They are really insistent in taking me on loan, and Barca know all about this. They’re clubs who think that I could be a useful player for them and gain experience at the same time.”

Honestly: just think about it. Eight months ago, Pedri reckoned he was either going to spend a season back in Division Two with the Blaugrana’s academy kids or trying to learn German, cope with the freezing Bundesliga winter and adapt to “Gegenpressing.”

Right now, 42 matches into Pedri’s Barcelona first-team career, the hero of our tale is, astonishingly, standing in for the departed Luis Suarez as Messi’s new “best friend,” he’s playing for the bookmakers’ favourite to win La Liga — Barcelona are four points behind leaders Atleti — he’s got a shot at lifting Spain’s Copa del Rey against Athletic Club in just over two weeks’ time, and as a horrific red-card challenge from Georgia’s Levan Shengelia showed on Sunday night, he’s viewed as a dangerous international footballer.

Perhaps the greatest thing about Pedri, right now at least, is that it really doesn’t matter whether you love, respect, hate or are indifferent about FC Barcelona. Watching him glide across the playing field, seeing his supernatural anticipation, enjoying his instinctive first time passing and ra-ta-ta-tat tempo setting in midfield is just sheer joy for anyone who loves football.

Many tests lie in wait for the kid, including vastly important matches away to Real Madrid and at home to Atleti this season alone, and nobody — literally nobody — is immune to dips in form and confidence, particularly a skinny, five-foot-nine, inexperienced 18-year-old whom rivals are starting to enjoy targeting. But I honestly believe that if young Pedri can avoid major injury, we are witnessing the birth of a player who has the technical repertoire, attitude, character, brain and learning environment to go on and become one of the modern European greats. That’s how absolutely glowingly wonderful this kid is.

Do yourself a favour. Track his matches down and watch every last one of them from here on in. You’ve been warned: a true star is born.