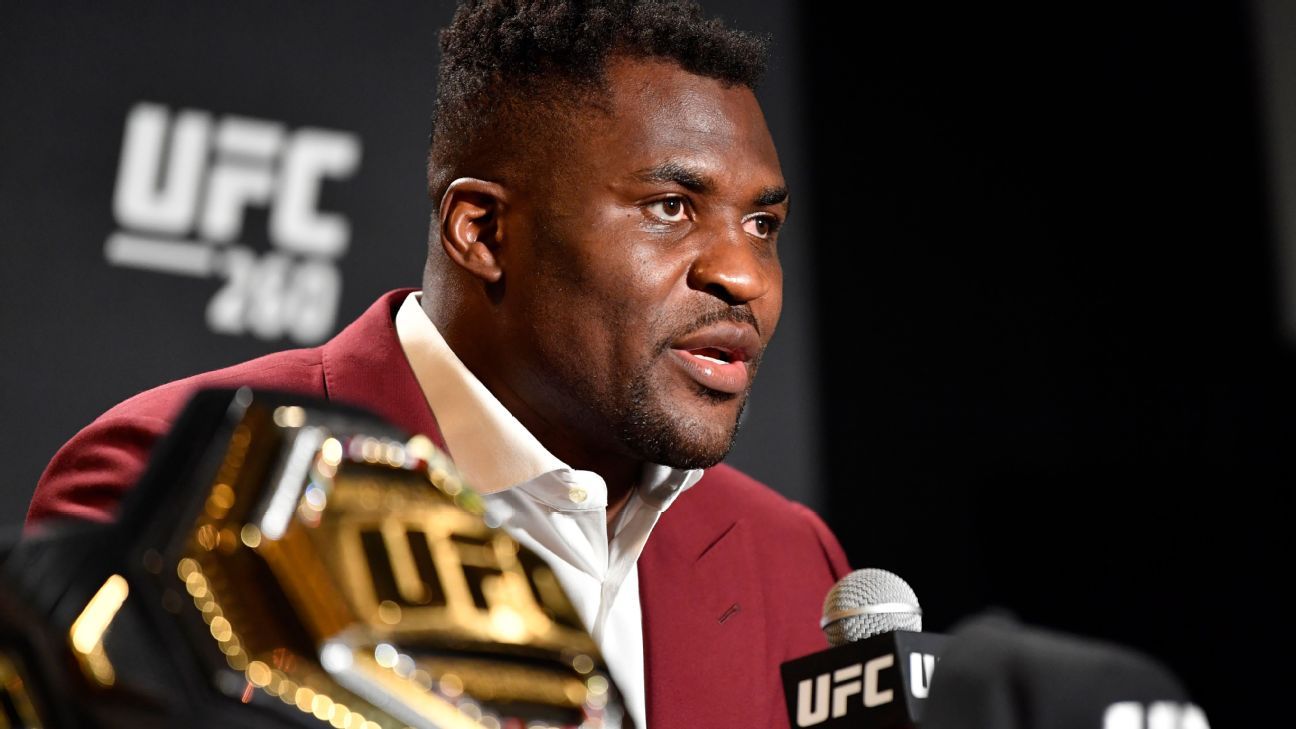 UFC heavyweight champion Francis Ngannou captured the imagination — as well as the most prestigious prize — of the combat sports world when he dethroned Stipe Miocic at UFC 260 on Saturday.

So it was no surprise that ESPN’s panel made Ngannou its overwhelming choice for the top spot of its latest Hot List.

The list recognizes achievements over the last three months, a time span that featured two new champions — including bantamweight Aljamain Sterling, who became the first person to win a UFC belt by disqualification when Petr Yan landed an illegal knee — and several knockout-of-the-year candidates. Success, controversy and flash conspired to make this one of the more intriguing periods in UFC history.

Last three months: Stopped Stipe Miocic in the second round on March 27

Miocic may be the greatest MMA heavyweight who ever lived, but Ngannou dominated the former champion in a rematch of their 2018 bout. Miocic won their first fight by unanimous decision with superior wrestling, but Ngannou didn’t allow that to be a factor in the rematch as he defended the takedown and displayed a more well-rounded skill set.

Will there be a trilogy fight? Maybe, but the heat is already building for Ngannou to make his first defense against Jon Jones. Whether that happens will depend on the UFC and Jones coming to financial terms, and that already seems at an impasse. But one thing is certain, Ngannou wants the division to move more quickly than it has over the past three years, when the Miocic-Daniel Cormier trilogy limited the division to one fight per year. Ngannou said he wants two more fights this year, starting with Jones and possibly Derrick Lewis after that.

It’s a new era for the UFC heavyweight division, one with a fearsome new champ who wants big fights lined up quickly.

Last three months: Stopped Conor McGregor in the second round on Jan. 23

It appeared Poirier had a choice to make: fight for the belt or fight for the money vs. McGregor. Poirier chose McGregor, and their trilogy bout is expected to happen at UFC 264 on July 10.

Michael Chandler, meanwhile, will face Charles Oliveira for the lightweight championship at UFC 262 on May 15, and the winners of these two bouts could face off after that.

UFC president Dana White said Poirier made the right call to fight the biggest star in UFC history. If Poirier beats McGregor and then wins the title, it would easily be the biggest year in his long and distinguished career.

Last three months: Stopped Gilbert Burns in the third round on Feb. 13

Usman is crafting one of the greatest welterweight careers in UFC history. He hasn’t lost a fight in eight years and is 13-0 in the UFC. He faced some adversity early against Burns before shifting momentum and ending the fight early. And it wasn’t just wrestling or pushing his opponent up against the cage that won the fight for Usman. His striking was on point, including a devastating jab.

Next up is a rematch with Jorge Masvidal at UFC 261 on April 24. Usman believes Masvidal agreed to take their first fight in July 2020 because he had a ready-made excuse that he had just six days’ notice. Masvidal will have more time to prepare for this one, although it might be slightly less than a full camp.

Either way, Caesars Sportsbook by William Hill has Usman as a heavy favorite. If Usman wins, would his next title defense be against Leon Edwards, if he’s able to get past Nate Diaz on May 15?

So much for Adesanya’s champ-champ quest. Blachowicz dominated the middleweight titlist, winning four rounds on all three scorecards.

Blachowicz also was the underdog when he faced Dominick Reyes in September 2020 before recording a second-round stoppage to win the vacant title.

Who’s next? Maybe Glover Teixeira, which is a fight Blachowicz might actually be favored to win.

Holloway was so dominant while beating Kattar that he took time between punches to turn to the announcing team and declare: “I’m the best boxer in the UFC.”

Holloway had taken exception to analysts saying in the lead-up to the fight that Kattar might have the edge in boxing, so he decided to address the critics with words and actions.

His next fight is expected to be for the featherweight belt he owned for over two years.

Last three months: Stopped Dan Hooker in the first round on Jan. 23

Chandler has made the most of his short time in the UFC. He knocked out Hooker in less than three minutes in his debut and will fight Oliveira for the title in his second UFC fight.

He said he expects to make his first title defense against McGregor later this year.

She makes it look too easy. The UFC doesn’t even bother ranking anyone below Nunes at featherweight, and nobody would expect her to lose at bantamweight.

Her biggest challenge may be complacency, but that definitely was not the case against Anderson.

Last three months: Stopped Curtis Blaydes in the second round on Feb. 20

No one stands to benefit more if the UFC and Jon Jones can’t agree on a deal than Lewis. If Jones isn’t Ngannou’s first challenger, Lewis is expected to get the nod.

Lewis got the unanimous decision in a lackluster bout vs. Ngannou in 2018, but nobody would expect the encore to be anywhere near as boring.

Lewis’ KO of Blaydes was his second in a row over a top-15 opponent, after he stopped Aleksei Oleinik in the second round in August.

Last three months: Stopped Frankie Edgar in the first round on Feb. 6

His last two wins, including an October second-round KO of Marlon Moraes with a spinning heel kick to the head, have been highlight-reel stoppages.

He seems on a title quest, but his next fight won’t be easy as he’ll welcome back former champion TJ Dillashaw from a two-year drug suspension on May 8.

Last three months: Submitted Drew Dober in the third round on March 6

Khabib Nurmagomedov has been predicting for years that Makhachev is destined to become a UFC champion, and Makhachev has done nothing to diminish that notion.

With Nurmagomedov in his corner, Makhachev resembled his longtime training partner and close friend by mauling Dober before getting the tap in the third round.

Makhachev is ranked No. 11 by the UFC, and he should be on the verge of landing a big name for his next fight.