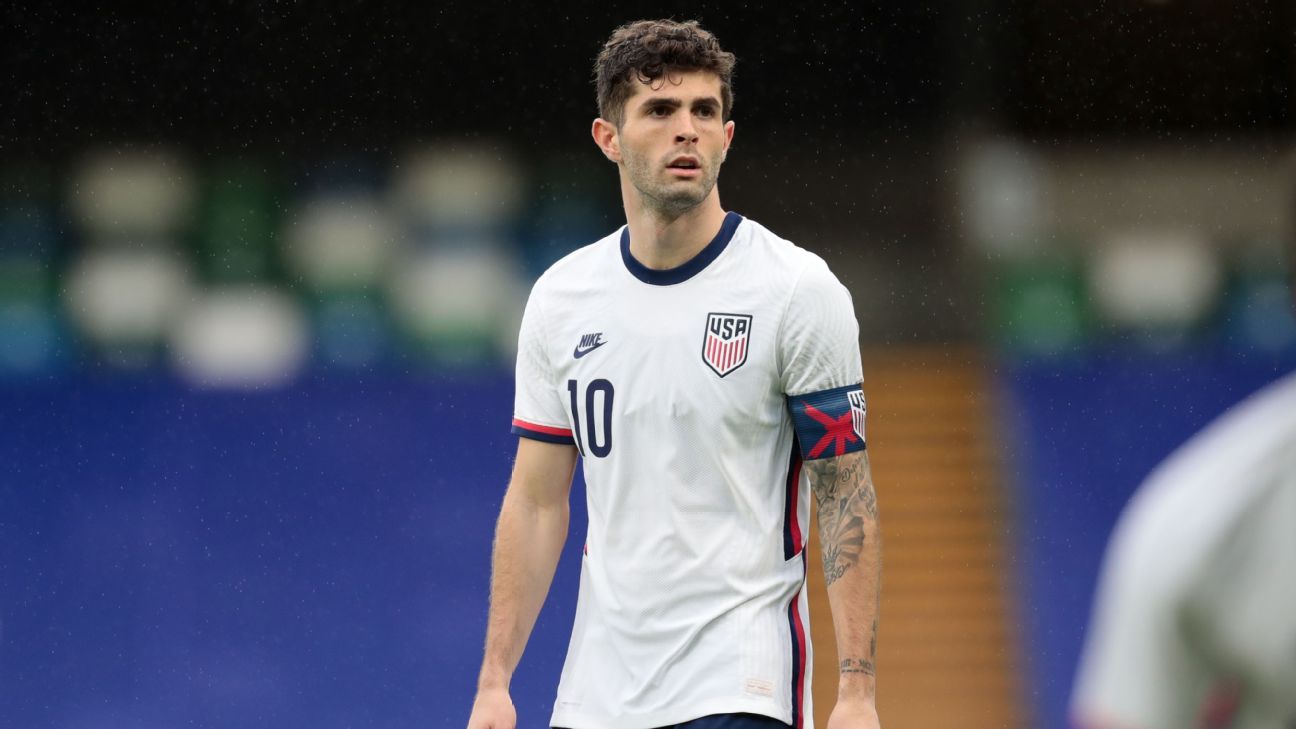 The March international break gave us our latest look at what Gregg Berhalter’s United States men’s national team has to offer, with nearly full-strength squads earning friendly wins over Jamaica and Northern Ireland. So with the Americans’ performances fresh in mind, ESPN’s Jeff Carlisle breaks down the 23-man squad he’d put on the flight to Qatar for the 2022 World Cup.

1. Christian Pulisic | Midfielder | Chelsea | 24: At 22, Pulisic’s career at club and country already feels like that of a grizzled veteran. His situation at Chelsea feels unsettled, and the injury history is concerning. But it is fair to say that the U.S.’s fortunes on the road to Qatar will be tied to him, and he’d be on the plane even if he wasn’t fully fit.

2. John Brooks | Defender | VfL Wolfsburg | 29: The questions about Brooks’ consistency with the U.S. have abated, and at this stage he’s one of the first names on Berhalter’s lineup card thanks to his defending and distribution. He’s also had a stellar season at Wolfsburg and remains a threat on set pieces.

3. Weston McKennie | Midfielder | Juventus | 24: One of the leaders of this young and exciting U.S. team, McKennie’s game has grown by leaps and bounds in the past year. The native Texan has far exceeded expectations in his debut season with Juventus, emerging as a real goal threat from central midfield. McKennie has the versatility to play anywhere in midfield and brings energy, tenacity and aerial prowess to Berhalter’s side.

4. Tyler Adams | Midfielder | RB Leipzig | 23: Adams seems like a captain-in-waiting at this point given his composed play in midfield as well as his leadership. He’s playing in a top league as well, and at age 22, he’s bound to only get better. After bouncing around a bit positionally at international level (and club level too), he’s the clear No. 6 for the U.S.

5. Zack Steffen | Goalkeeper | Manchester City | 27: Despite limited playing time at Manchester City, Steffen remains the clear No.1 for the USMNT. In addition to being a good shot-stopper, Steffen has showcased the confident and commanding personality needed to be an elite goalkeeper. Steffen also is the best of the U.S. bunch with his feet, something both Berhalter and Pep Guardiola value highly.

6. Sergino Dest | Defender | Barcelona | 22: The only question surrounding Dest these days is where to play him, right- or left-back — or wing-back, should Berhalter opt for a three-man defense. Either way, he has become a mainstay in the U.S. lineup, with his ability to get forward and contribute to the attack his primary strength. The experience he’s getting at Barca should see him continue to improve.

7. Giovanni Reyna | Midfielder | Borussia Dortmund | 20: Just 18, Reyna has emerged as an attacking force for the U.S. and Borussia Dortmund, and his craftiness on the ball hints at even bigger things to come. If Reyna can progress, then he’ll provide a much needed counterweight to Pulisic on the opposite wing. He’s already been impressive in friendly appearances. Now the challenge is to repeat that form in bigger competitions.

8. Yunus Musah | Midfielder | Valencia | 20: The frenzied buzz following his commitment to the USMNT in March feels like a contrast to Musah’s style of play. Already a steady presence in the center of the midfield, Musah also adapts to the game’s tempo without forcing anything. His declining minutes at Valencia can be chalked up to the return to fitness of senior names in the team, but the 18-year-old will get better with time.

9. Josh. Sargent | Forward | Werder Bremen | 22: The St. Louis native would start at striker if group stage started tomorrow. He has found good form recently at Werder Bremen, but travel restrictions have limited the 21-year-old’s time this year with Berhalter’s side. The No. 9 position is a wide-open race and Sargent could use some goals to complement his solid pressing and hold-up abilities.

10. Aaron Long | Defender | New York Red Bulls | 30: Long has been one of the foundational pieces of Berhalter’s reign, earning 18 of his 21 caps under this manager. His recovery pace is exceptional, making him arguably the U.S.’s quickest option in the center of defense. Long could bolster his case by finally making a move to Europe to pick up some polish, but his place is all but assured.

11. Matt Miazga | Defender | Chelsea | 27: The battle for the right center-back spot remains intense, and Miazga is in the thick of it along with Long — and Richards. Miazga’s string of loans away from Chelsea seems never-ending, but the good news is that he’s getting consistent playing time with Anderlecht. There can’t be any letup however if he’s to get more playing time under Berhalter.

12. Gyasi Zardes | Forward | Columbus Crew SC | 31: If there’s a forward in this player pool who is intimately familiar with the intricacies of Berhalter’s system, it’s Zardes. The 29-year-old scored 19 goals in his sole season in Columbus under the now-U.S. boss, and possesses the mobility and nose for goal that would make him a trustworthy reserve in Qatar.

13. Reggie Cannon | Defender | Boavista | 24: The ex-FC Dallas man, 22, is a well-balanced right-back, who is both responsible defensively, but also can join in in attack. Possessing good pace and stamina, Cannon will either back up Dest on the right or, if Dest moves to the left, contend with Bryan Reynolds or DeAndre Yedlin for the starting role.

14. Timothy Weah | Forward | Lille | 22: After a lost 2019-20 season due to injury, Weah has bounced back nicely this campaign with five goals thus far for joint-Ligue 1 leaders Lille. Weah’s pace and movement are an attractive proposition for any coach, and in the past, he has shown the versatility to play anywhere across the frontline. Weah still has tremendous upside and will be major factor for years to come.

15. Ethan Horvath | Goalkeeper | Club Brugge | 27: Horvath has found playing time tough to come by with Brugge this season, but he showed his quality in a Champions League outing against Zenit St. Petersburg in November. If he can find a new club, and get on the field, he’ll solidify his hold on the No. 2 spot behind Steffen.

16. Antonee Robinson | Defender | Fulham | 25: Another who has had a breakout season, the English-born Robinson has really impressed in his first taste of the Premier League with Fulham. A modern left-back who likes to get forward and take on opposing defenders, Robinson has also made major strides defensively in the past 18 months. After some uneven early performances in a U.S. shirt, he is quickly growing into an important figure.

17. Jackson Yueill | Midfielder | San Jose Earthquakes | 25: When Berhalter wants to play with a deep-lying playmaker at the No. 6 spot, Yueill has been the preferred option given his range of passing. Is that enough to get on the roster? For now, yes, although it remains to be seen if that will hold up over time, and if a player like Brenden Aaronson is preferred.

18. Bryan Reynolds | Defender | AS Roma | 21: This is a pick based on upside, a calculated risk that Reynolds will continue his rapid rise now that he’s at a historic European club like Roma. His selection comes at the expense of Yedlin, who at 27 and now with Galatasaray, is likely the finished article. Reynolds is a tantalizing prospect with the potential of reaching a very high ceiling.

19. Daryl Dike | Forward | Orlando City SC | 22: One of the highest risers of late, Dike has been in torrid form — five goals in 11 appearances — since joining Barnsley on loan from Orlando City. Still just 20, Dike’s combination of strength, aerial dominance and finishing ability make him unlike anyone else in the U.S. player pool. A contender for the starting striker spot, at minimum Dike projects as an impact sub.

20. Sebastian Lletget | Midfielder | LA Galaxy | 30: Lletget has been a staple of Berhalter’s teams, with his only absences from the U.S. during the manager’s tenure coming at the 2019 Gold Cup, when he missed out through injury. The 28-year-old is the U.S.’s Swiss Army knife, capable of playing anywhere in the midfield or attack, a trait seemingly valued by his manager.

21. Chris Richards | Defender | Bayern Munich | 22: The FC Dallas academy product is making his case to partner with Brooks at center-back or be the extra defender in a back three. On loan at TSG Hoffenheim from Bayern, the 21-year-old is proving he can be a regular starter in the Bundesliga. Right now, he is behind more established veterans on the depth chart but his versatility as an outside-back option strengthens his case.

22. Matt Turner | Goalkeeper | New England Revolution | 28: For a third keeper, it’s important to recruit a player who’s excited about being at a major tournament, even if the chances of playing are remote. With no youth national team experience and one senior cap, the 26-year-old Turner fits the bill. It doesn’t hurt that he’s the best goalkeeper in MLS, possessing exquisite shot-stopping abilities.

Janusz Michallik highlights Christian Pulisic and Gio Reyna as he evaluates the USMNT’s 2-1 win in Belfast.

23. Jordan Morris | Midfielder | Seattle Sounders FC | 28: USMNT fans were finally excited to see the 26-year-old Morris play overseas, but another ACL injury cut short his loan spell at Swansea City. Morris has the work rate, but will his speed be affected by the injury? The Sounders star may not return until the fall, just as World Cup qualifying matches begin.

Jozy Altidore | Forward | Toronto FC | 33: If Altidore can get off to a good start with Toronto FC this season, he’ll be considered for a spot as a reserve striker. At 31, he could be motivated for one last shot at USMNT glory following from his unfortunate injury at the 2014 World Cup and the failure of the 2018 campaign.

Brenden Aaronson | Midfielder | FC Salzburg | 22: Aaronson is the odd man out in a position the U.S. has an embarrassment of riches. That said, there’s every chance he could prove us wrong, such is his dynamic talent. Ultimately, Berhalter will need to decide whether his team would be best served by another attacking threat or a different profile of midfielder, like Yueill.

Walker Zimmerman | Defender | Nashville SC | 29: Zimmerman is in contention with Miazga and, to a lesser extent, Long for one of the centre-back berths, possessing ability on the ball but less of the recovery speed Berhalter values. If Richards develops as expected, it’s difficult to see where Zimmerman fits into the 23-man squad.

Paul Arriola | Midfielder | D.C. United | 27: Like Morris, his loan at Swansea was cut short due to injury, so his best chance to stay on Berhalter’s radar is to get fit for D.C. United. The right side of the field is stacked with talent but Arriola’s ability to cover ground as a winger or a right-back will keep him in the mix.

Nicolas Gioacchini | Forward | Caen | 22: With two goals against Panama in November and an assist last week against Jamaica, the Caen forward is making the most of his early minutes with the USMNT. Gioacchini doesn’t have a trademark skill per se, but he seems to possess good intangibles that will have him in contention to make the squad behind the likes of Sargent and Dike.