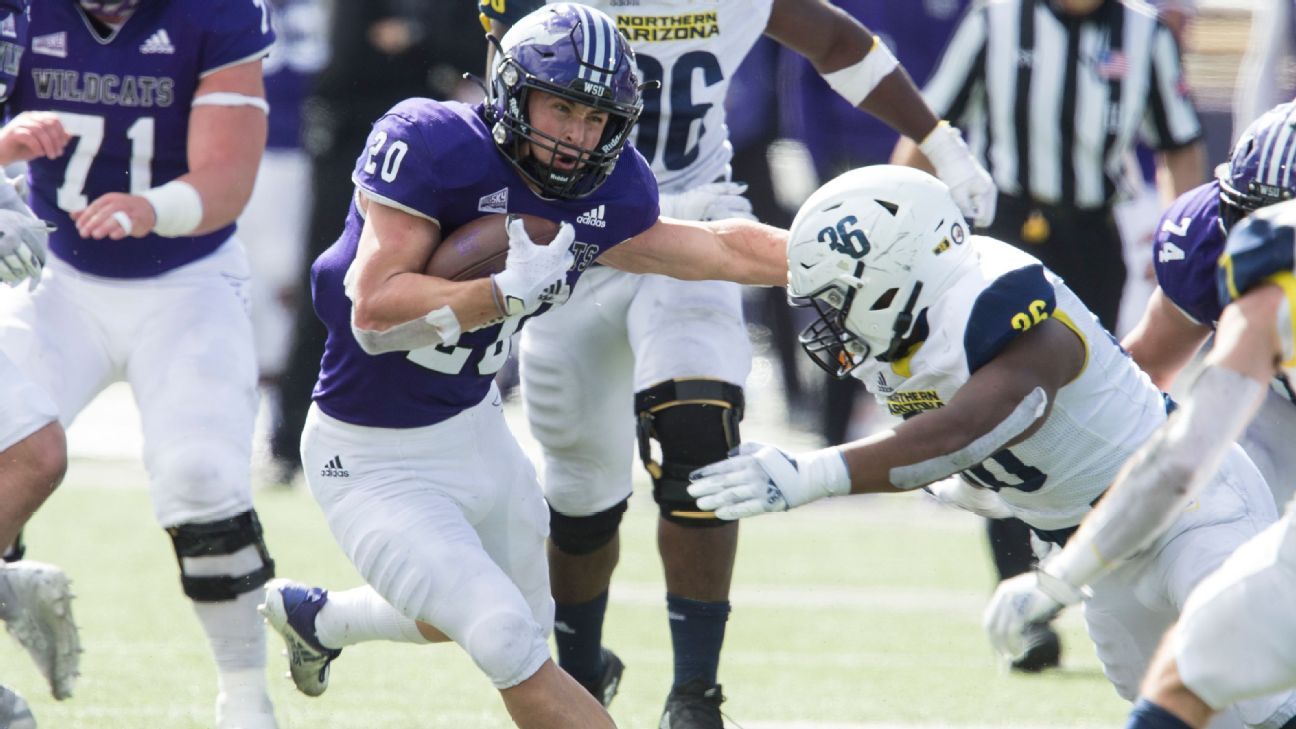 The road is getting a little bumpy for the 2021 spring FCS season.

On the field, it continues to deliver.

Last weekend alone, No. 3 Weber State gave up a go-ahead score to Northern Arizona with 17 seconds left, then completed a 50-yard Hail Mary as time expired. VMI moved to 5-0 for the first time in 40 years with a touchdown pass from its backup quarterback with 35 seconds left. Elsewhere, Austin Peay upset top-10 Jacksonville State, Nicholls hung 75 points on Incarnate Word in the points-crazed Southland, Idaho beat Southern Utah with a TD with 7 seconds left, UC Davis beat Idaho State with a TD with 8 seconds left, and Tennessee State beat UT Martin with a late 2-point conversion stop. Then there were walk-off field goals from Missouri State (over SIU) and Davidson (over Morehead State). The magic of smaller-school football is unstoppable between the lines.

Outside the lines, the coronavirus still exists.

This week’s two biggest games, No. 4 South Dakota State at No. 2 North Dakota State and No. 1 James Madison at No. 15 Richmond, have both been bumped; the former will take place on April 17, and we’ll see how the Colonial Athletic Association handles the latter. Missouri State-North Dakota, Albany-Delaware and Lehigh-Lafayette, one of the sport’s greatest rivalry games, are all off, too. Albany, Illinois State, Chattanooga and Cal Poly have opted out for the rest of the season.

With three weeks left in the regular season, seven of Stats Perform’s FCS top 25 have played three or fewer games, and the number of cancellations is worrisome. But the show goes on for some schools, at least.

Note: Rankings listed below are the STATS FCS top 25 found at NCAA.com, and all times are Eastern.

The biggest games of the week are now out West

Out of 14 Big Sky games so far this spring, seven have been decided by five or fewer points, 10 by 10 or fewer. Just last week, three were decided in the final 10 seconds. It has been incredible.

Weber State has taken part in two of those seven thrillers, which is great from a watchability standpoint, but it has been difficult to view the third-ranked Wildcats as a truly elite team because of it. Since an easy cruise over Idaho State, they’ve needed late-game magic to get past both UC Davis and Northern Arizona, and while they should get to 5-0 with relative ease — they’re 19-point favorites over 1-3 Southern Utah on Saturday, then play Idaho State again next week — it would certainly be useful if they started looking like their ranking.

They might not be that far away. While the Wildcats genuinely struggled to move the football against UC Davis, last week’s issues were a bit more fluky: They threw an interception at the NAU 2 and lost a fumble at the 5.

WSU backs Josh Davis, Daniel Wright Jr. and Dontae McMillan are averaging 7.1 yards per carry over 25 carries per game, and while quarterback Randall Johnson struggled with sacks in the first half against NAU, he ended up 11-for-19 passing and grounded out key yards in the run game. It’s unclear whether Johnson or freshman Bronson Barron will take most of the snaps behind center; Barron was the starter, but missed the NAU game after injuring his wrist against UCD. WSU should move the ball against a shaky SUU defense, but the Thunderbirds will test WSU’s secondary — SUU quarterback Justin Miller is completing 70% of his passes with a 168.2 passer rating.

Another Big Sky favorite has alternated between dominance and rickety play: EWU was upset by Idaho in its spring opener and had to survive a track meet against Idaho State, 46-42, two weeks later, but the Eagles have also beaten NAU and Cal Poly by a combined score of 107-23. The defense doesn’t show up every week, but EWU quarterback Eric Barriere has lived up to his preseason hype: In four games, he’s thrown for 1,491 yards and 13 touchdowns, and he has picked up the pace in the past two games, completing 69% of his passes at 13 yards per completion.

UC Davis has the best defense EWU has faced. The Aggies are allowing 2.9 yards per rush and have picked off five passes in four games. Linebackers Cole Hansen and Connor Airey have combined for 10.5 TFLs, three sacks and three passes defensed, and UCD is averaging nearly four sacks per game. The offense, like EWU’s defense, has been inconsistent, but the run game is explosive. The winner of this one is in prime position for an at-large playoff bid; the loser will have two losses and could miss the dance.

There’s one more team with a winning conference record and potential playoff ambitions: Paul Petrino’s Idaho Vandals. (Petrino’s brother, Bobby, saw his Missouri State team move to 4-1 in the MVFC last week — the Bears are working their way onto the bubble as well.) They’ll face an Idaho State team that has played in three consecutive thrillers, losing two.

In just three games, Idaho has had three different quarterbacks throw at least 20 passes. Starter Mike Beaudry missed last week’s win over SUU, and freshman backup CJ Jordan left the game with injury in the third quarter. That left third-stringer Nikhil Nayar to deliver down the stretch, and damned if he didn’t do so. He completed 11-of-19 passes for 137 yards and two touchdowns in the fourth quarter, and his seven-yard strike to Cutrell Haywood with 7 seconds left won the game.

Petrino is staying mum about who will play at QB, but whoever’s behind center might need to engineer quite a few scoring drives to keep up with a prolific ISU passing game. Wyoming transfer Tyler Vander Waal is averaging 294 passing yards per game, and wide receivers Tanner Conner, Jalen Henderson and Xavier Guillory have combined for 818 yards, 19.5 per catch. The ISU defense is what we’ll politely call charitable, but the offense is rock solid.

If EWU-UCD is a potential playoff elimination game, next week’s EWU-Idaho rematch could be one, too. But the Vandals have to get by a team that beat them by 34 points in their last trip to Pocatello.

Deion Sanders has been a headline machine since taking the Jackson State head coaching job last fall. First, he signed a motherlode of FBS transfers in his 2021 recruiting class. Then, before most of those transfers were even eligible, he led JSU to an exciting start this spring. His Tigers are 3-1, suffering only a tight loss to Alabama State two weeks ago. That ceded potential control of the SWAC East race to ASU, but if they win out they could still be positioned well for a spot in May 1’s SWAC Championship.

Their three remaining games pit them against Southern and Prairie View A&M, two of the West’s better teams, and unbeaten (OK, 1-0) Alabama A&M on April 10.

Southern was the West’s preseason favorite; Dawson Odum’s Jaguars handed Alabama State its only loss in the season opener, but suffered a loss to upstart UAPB the next week. Both the SU defense and quarterback Ladarius Skelton have been slow to get rolling this spring — though still an excellent runner, Skelton has struggled throwing the ball and saw backup John Lampley take some of those duties away from him.

The Jags can still run the ball, though, and they’re only 1.5-point underdogs, per Caesars. This one’s on ESPN, and it could come down to the wire. It’s the FCS way.

Nothing ends a Cinderella story with more cruelty than a quarterback injury. Two weeks ago, VMI moved to 4-0 for the first time since 1981 with a stirring OT win over Samford — Reece Udinski threw the game-winning two-point conversion on what turned out to be a torn ACL. The school kept the severity of the injury mostly under wraps last week in the run-up to the Keydets’ win over Wofford, but backup Seth Morgan kept the run going with a late comeback, and this week Udinski was officially ruled out for the rest of the spring.

After a slow start, Morgan looked really good. He finished 25-for-34 for 375 yards and four scores and led the Keydets to scores on five of their last six drives to turn a 17-7 halftime deficit into a 36-31 win. Now he’ll face a sturdy ETSU defense that is allowing 18 points per game and 4.2 yards per play.

With Chattanooga opting out, VMI (5-0) and ETSU (3-1) are the top two teams in the Southern Conference standings. Can the Keydets keep the story going?

Other games to watch

Friday night: No. 23 Northern Iowa at South Dakota (7 p.m., ESPN+). At 3-3, UNI is probably done in the playoff race, but the Panthers’ defense is still worth the price of admission.

Saturday afternoon: No. 16 Villanova at Maine (Noon, FloFootball.com). We’ve only seen Villanova twice this season, and once was in a dramatic loss to Rhode Island. The Wildcats don’t have a ton of time to build a playoff case, but they’ll remain in the CAA race with a win.

Saturday afternoon: Robert Morris at No. 7 Kennesaw State (1 p.m., ESPN+). KSU is the class of the Big South, but the Owls didn’t exactly light the world afire against Charleston Southern and Dixie State recently. Can the Owls find fourth or fifth gear?

Saturday afternoon: No. 13 Nicholls at McNeese (1 p.m., ESPN+). Nicholls allowed 71 points one week and scored 75 the next. The Southland is the ultimate basketball scores conference this year, and you should watch every single damn Southland game.

Saturday afternoon: No. 14 Murray State at Austin Peay (3 p.m., ESPN+). Murray State has won five straight this spring. The Racers face Jacksonville State next week, right after they get the team that upset JSU last week.

Saturday evening: Lamar at No. 25 Southeastern Louisiana (7 p.m., ESPN+). See above. Watch every Southland game you can.