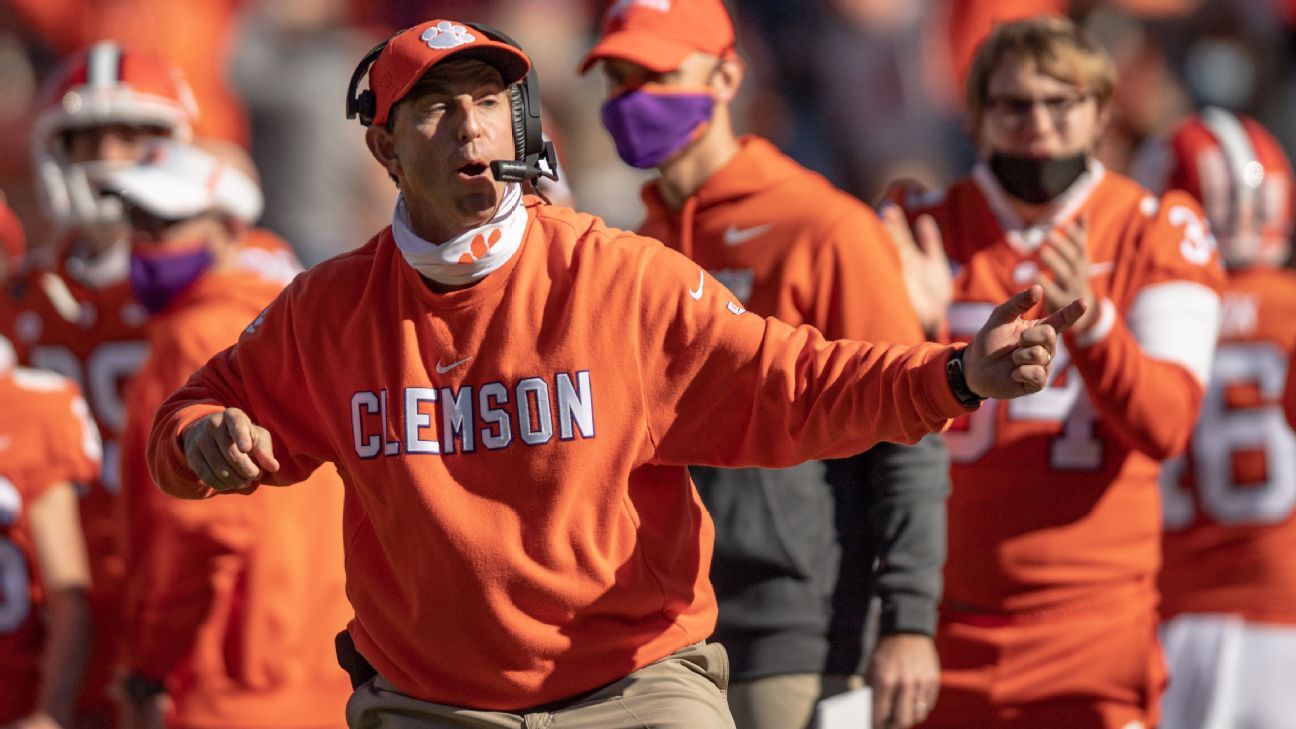 There’s surprisingly little drama surrounding Clemson‘s spring game, which is probably a story in itself. Throughout the past six weeks, head coach Dabo Swinney has offered his usual effusive praise of position groups that looked shaky when we last saw the Tigers take the field in a 49-28 loss to Ohio State in the Allstate Sugar Bowl. He has been wowed by the freshmen, part of Clemson’s best signing class in recent history. He has loved the leadership from D.J. Uiagalelei, who will be replacing star QB Trevor Lawrence.

In other words, all those storylines that should make for ample spring drama have felt, well, pretty undramatic.

Simply having a full spring of practices, following last year’s shutdown midway through due to COVID-19, feels like a refreshing return to normal.

“Just getting to this point, it’s like coming full circle,” Swinney said.

Still, this spring marks the first time the Tigers have suited up without Lawrence or Travis Etienne in four years, and it’s the first chapter for Clemson following one of the most frustrating losses of Swinney’s career, so there’s definitely room for a few meaningful storylines, too.

So, as the Tigers get set for their spring game Saturday (1 p.m. ET, ACC Network), here are three key areas to watch.

It’s rare when the tailbacks are center stage in a spring game. As coaches increasingly look to decrease workload and hits on their backs during practice, the spring game is usually the point at which walk-ons get their moment in the sun.

For Clemson, however, this spring game offers plenty of intrigue at running back, with fans getting their first good look at five-star freshman Will Shipley, who figures to be competing for reps with last year’s primary backup, Lyn-J Dixon, well into the fall.

Dixon spelled Etienne in each of the past three seasons, totaling more than 1,200 rushing yards and 11 TDs over his freshman and sophomore years combined. His junior campaign in 2020, however, saw a steep decline in both carries and performance, with just 42 rushes (down from 104 in 2019) while averaging just 4.2 yards per carry (nearly half his career average).

But Dixon remains the veteran voice, and he said that was his biggest obligation this spring.

Those “young guys” include Shipley, who earned raves from Uiagalelei and, given his pedigree, could quickly emerge as a do-it-all back for the Tigers.

“He’s a really fast running back,” Uiagalelei said. “You can tell he has that mindset where he just wants to come out and compete, and he’s really locked in.”

In the aftermath of Clemson’s woeful performance against Ohio State in the College Football Playoff, there were plenty of red flags. But two areas warranted sincere concern, and they’re both at the line of scrimmage.

On offense, the new-look line, which featured four first-year starters in 2020, was a mess. The run blocking was virtually nonexistent, with the Tigers averaging just 1.8 yards per rush before contact — down 32% from 2019. That also meant a dramatic change to the playcalling, with Clemson calling about 10% fewer rushing plays per game last season.

“It’s definitely frustrating for me as an older guy,” guard Matt Bockhorst said. “At the end of the day, it would be very easy for me to say we didn’t have the depth, or we didn’t have a full offseason, or I wasn’t healthy, and point to those reasons as to why we maybe didn’t play as well as we should have. But it doesn’t really matter what the reason is. We didn’t play as well as we were capable of playing, so moving forward, we’re really trying to instill a mindset that we need to get better, and the team’s gonna go as far as we’re gonna take them.”

The defensive line was far outmatched against the Buckeyes, too, and the lack of pressure or ability to contain Trey Sermon and the Ohio State run game was evident throughout the blowout loss. That has been a trend over the past couple of years, as the strength of Clemson’s defense has shifted away from the guys up front after years of success behind Vic Beasley, Christian Wilkins and others.

Swinney thinks the pendulum is set to swing back in the other direction for 2021, however, and praised both the elite talent, including star sophomores Myles Murphy and Bryan Bresee, and the depth on Clemson’s D-line. That the Tigers end the spring in a relatively good place health-wise is also a bonus. Tyler Davis and Xavier Thomas both missed significant time in 2020.

“We were an inconsistent bunch last year for sure,” Swinney said. “Whether it be guys that were available to play, inexperience, depth, whatever it was. But man, I love that group. We took a few bumps and bruises along the way, but Bryan Bresee is so much better than he was at any point last year. Myles Murphy, the same. It’s a really good group of guys, and this thing’s got a chance, if we stay healthy, to have the type of group that we’ve had around here and what we’ve come to be accustomed to.”

If the stagnant run game was the No. 1 problem for Clemson’s offense last year, the inconsistency at outside receiver was a close second. While Cornell Powell stepped up midway through the year, and Amari Rodgers and Etienne both offered versatile alternatives, it was obvious the Tigers missed Justyn Ross on the outside.

Ross returned to work this spring after a potentially career-ending neck surgery, but he still hasn’t gone through full contact. Frank Ladson Jr. and Joe Ngata, once tabbed as the receivers of the future at Clemson, rarely saw the field in 2020 for myriad reasons. Ladson missed the end of spring ball with another injury, and Ngata, who had just four catches after Clemson’s opener last year, is far from guaranteed a significant role.

Instead, the real intrigue for the spring game might be freshman Beaux Collins, who earned raves this spring from teammates and has an established chemistry with Uiagalelei, his high school teammate at St. John Bosco (California). Ross and Tee Higgins were among the past Clemson stars to show off their skills in the spring game before turning in explosive seasons in the fall, and Collins could follow suit.